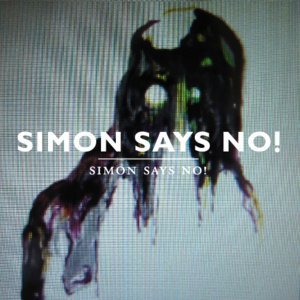 Ah just when you thought “that’s it, guitar music is boring me, time to move on”, along comes a record that either refreshes those essential wellsprings of the genre with some well needed replenishment, or does something so ridiculously good and different the whole cycle of copying starts off again. This record is one of the former, nothing new, brazenly nabbing the Chameleons’ or Killing Joke’s vibe in places, sounding ridiculously like Spacemen 3 in others, Simon Says No still manage to conjure up that portentous spirit that makes good guitar records so, well… good.

Now it’s taken me quite a while to pick up on this because the LP has NO vibe at all; it’s not helped by a shocking cover, a crap name, and the band photos that are uninspiring to say the least. Luckily (for me) I played it, because after the opening snarl of Exit, things pick up and blast off into some obvious but bloody enjoyable territory. Solitary Rush sounds just (and I mean just) like Ride just about the point when they had released their third EP, whereas some guitar parts on Sigh and Reverse sound like SSN! have just wrenched Kevin Shields’ from his MBV studio, mid recording & slapped his part on their record. As if that wasn’t enough, See Me Through is the best Chameleons rip off I’ve heard, ever. Period. Hell, the singer even does that growl like Burgess does on Up the Down Escalator.

So it’s derivative. And so what it’s still a good listen. And actually the band do sound that they are angry or sparky enough to have personalities of their own swimming through the gloop of delay and reverb they have created. City, Cut Off Orange and Parka Circus are a pumped up shouty things, high on tremolo and sweat.

Perhaps they are at their best with the more reflective numbers like Illusion and Systematic, which allow a touch of melancholy and gracefulness to colour proceedings but there isn’t much room in this increasingly demented album for that kind of thing.