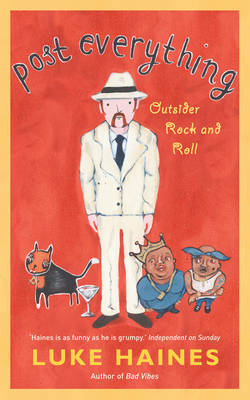 Post Everything, Luke Haines’ second memoir, picks up more or less where his first, the peerless Bad Vibes: Britpop and My Part in its Downfall, left off.  The year is 1997: Britain’s first light entertainment PM is carried in to Number 10 to the strains of Brian Cox’s keyboard, a dead princess delivers a coup de grâce to the syphilitic old corpse of Cool Britannia and the Auteurs man is in artistic no man’s land following the ‘difficult’ Baader Meinhof album.  The book’s prologue fast-forwards to 2001, where Haines is appearing on the Today programme to launch The First National Pop Strike.  He argues that the strike represents ‘a chance to ponder the background soundtrack… to dismantle the apparatus of the music industry, to afford ourselves some peace and quiet, thus enabling us to rethink popular culture.’  The notion is roundly ignored by an ungrateful public and later pilfered by Bill Drummond (in 2006 the Zoo Records founder calls for a national no-music day) and Haines, the avant-garde Arthur Scargill, is once again on the outside.

The beef of the book is concerned with the progress of Black Box Recorder, a sort of fag-end-of-Britpop Crucial Three dreamed up in a Camden alehouse.  Consisting of Haines, one-time Jesus and Mary Chain drummer John Moore and Sarah Nixey (‘Chas and Dave with a chanteuse,’ as the author puts it), the band goes on to find modest chart success and register an appearance on Top of the Pops with The Facts of Life, a brilliant song then and now.  Unfathomably less successful in the charts, but no less memorable, was debut single Child Psychology, with its ‘Life is unfair… Kill yourself or get over it,’ chorus.

Haines and Moore form a terrific double act throughout, embarking on an absinthe-fueled bender and posing as journalists in order to infiltrate Glenn Hoddle’s resignation press conference.  As the media bunfight unfolds and the unfortunate England manager struggles to explain his rickety belief system to the assembled gentlemen of the press, Haines presents him with lolly stick effigies of his own face while Moore pipes up, ‘Glenn, are you thick?’

Pre-millennial tension pervades the prose and Haines rails against the late-Nineties nostalgia boom (Stuart Maconie, look away now).  The underrated Auteurs album How I Learned to Love the Bootboys is considered alongside Richard Madeley’s unhinged ‘millennium cupboard’ where ‘non-perishable food items and bottled water’ are stored to be accessed in the event of global computer meltdown.  Haines trudges on, working with idiosyncratic intensity on the soundtrack to the doomed Christy Malry’s Own Double-Entry film, based on the cult B. S. Johnson novel.  Discomania, a song about the infamous ‘Silent Twins’ June and Jennifer Gibbons, quotes directly from the pair’s Broadmoor diaries.  The soundtrack is nominated in the best soundtrack category at the British Independent Film Awards, although its creator is remains steadfastly realistic about its chances: ‘I know for a fact there is more chance of Ian Brady becoming a Blue Peter presenter than me winning this frigging gong.’

A minor criticism of the book is that it lacks the neat narrative arc of its predecessor; where Bad Vibes followed Haines from unemployed teenage Television obsessive to the artistic peak of After Murder Park, Post Everything dwells too long on commercial failure and enemies real and imagined.  The defining moments are given to Haines’ flourishes of artistic licence.  He is a surefooted pop critic for sure – his footnotes on the MC5 span three pages – but his deconstruction of Professor Karl Wilkie’s (possibly fictional) Das Theorem von Trottel (‘The Theorem of the Moron’) is a joy.  True or not, his account of the mysterious Wilkie’s cult of Beatles denial in pre-unification West Germany is hilarious, estimating as it does that as of 1986, Sgt. Pepper’s Lonely Hearts Club had sold ‘fewer than 70 copies’.  Then, in a brilliantly observed metanarrative that recalls the ‘Quiet night in’ chapter from Bad Vibes, a laudanum-addled train journey through the Devonshire countryside is interrupted by strange visions of Notorious B.I.G., Tupac Shakur and Lawrence from Felt.  Mojo readers need not apply.