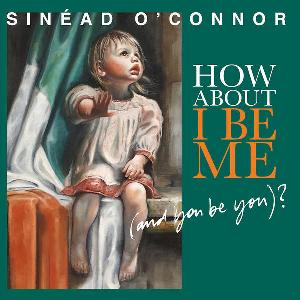 A ‘comeback’ album is an unnerving release for any established artist attempting to reconnect with wayward fans. But Sinéad O’Conner has the press on her side, for all the wrong reasons. The media have since abandoned O’Connor’s music and become obsessed with her confessions of “acting batty”, including temperamental relationships, over sharing online and two suicide attempts.

Her latest musical offering; How About I Be Me (and you be you?) bounds in with an obvious, yet uninspiring title. What you hear is what you get, and you certainly wouldn’t expect anything else from the Irish songstress.

Opening track; 4th and Vine tells of heady romance and the excitement of her new found love. Sinéad sings of getting ready for the wedding with the use of an askew rhythm that resembles something PJ Harvey would use. The song breaks into a mellow reggae beat and choral harmonies, but lyrics like “but he’s no wuss, girl you know his love is serious” are better suited to bubblegum pop.

This, her ninth album is a tender story of self reflection, volatile emotions and her acceptance of growing older. Old Lady explores the woes of disappearing youth with the album’s first power chords and her signature belting banshee vocals. Reason with Me is a reminder of the beauty behind a simple melody and her chilling, recognisable voice.

Queen of Denmark is a rowdier, sit-up-and-listen John Grant cover. The song suits O’Connor perfectly and reads like a diary entry. Interrupting guitar and Sinead’s crystal cries prove that experience and wisdom haven’t drained O’Connor completely of her roaring nature.

The likes of Take off Your Shoes and Back Where You Belong send O’Conner back to the folksy haunts of her past effortlessly. The lingering choral whispers and reverberating church bells drive the point home of her unease with Catholicism.

It’s been four years and seven months since her last album and How About I Be Me (and you be you?) isn’t a ground breaking comeback. Yet when your as distinctive as O’Connor than why change? O’Connor’s lyric from Very far From Home say it all; “let me create something, other than trouble” and this resonates throughout the album. Once again Sinead O’Conner has become something bigger and more profound than a news headline or a retweet.