..we just wish we could have seen more: Franz Ferdinand, Josh T Pearson, Mayhem, The Olivia Tremor Control, more of St Etienne, Wild Beasts – nowhere else does the list of what you missed because you were watching something else look quite like this.

..we just wish we could have seen more: Franz Ferdinand, Josh T Pearson, Mayhem, The Olivia Tremor Control, more of St Etienne, Wild Beasts – nowhere else does the list of what you missed because you were watching something else look quite like this.

All good things must end, and as the Forum Park is returned to the service of whatever goes on there the rest of the year (the business centre is this week hosting a global conference for the tug boat industry) we just wish we could have seen more: Franz Ferdinand, Josh T Pearson, Mayhem, The Olivia Tremor Control, more of St Etienne, Wild Beasts – nowhere else does the list of what you missed because you were watching something else look quite like this. We are weak, despite the finest omelette Barceloneta has to offer. I had completely forgotten that the city centre hotel I’ve booked for this last night is spaceship themed: I shit you not, it has “boarding” instead of reception; lit “portholes” showing starfield views; it’s completely ridiculous and I don’t even realise this til later, as Primavera world is only tangentially connected to reality. Back home it appears the Queen’s Jubilee celebrations are being rained on; here it’s a little overcast and a few drops are forecast but hey, it’s Sunday, and what do we do on Sunday? We go to the park!

We have ice cream. We have six beers from the same little general store we visited on Wednesday, which feels like years ago. And we have GIRLS NAMES and their wonderfully dark northern (Northern Ireland, in their case, but still) jangles. 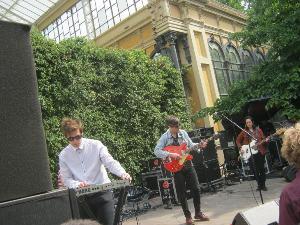 I meet the sole survivor of the Drownedinsound crew, the rest of whom are yet to surface after some late night fun at LFO. Damn, we missed LFO too, although I vaguely recall knowing they were on and being too wasted to walk and find them… It’s a great set from the Belfast four-piece anyway: some properly sturdy post-punk bass driving the whole machine along. Band members are smoking on stage! There are children here! The horror! The rain threatens. Around six drops greet VERONICA FALLS. But it’s ace indiepop in a park under trees bulging with ripe oranges, so we ignore it.

The crowd departs en masse over the road to Arc De Triomf for the closing show, and our plan to reclaim the little mound on the lawn we owned way back on Wednesday is foiled by the fact that a dog has done its business on it. We shift ten feet forward and listen to LORENA ALVAREZ Y SU BANDA MUNICIPAL who are performing under a string of flags of many nations. I have forgotten to bring the book out. We have no idea. They sound simultaneously very traditionally Spanish/Catalan and lo-fi indiepop. Quite nice really, even if the rain persists in dropping approximately once a minute, as if to say “I could piss down any time, you know. Don’t tempt me.” A jaunty, flamenco-tinged number gets a few people in the crowd dancing. This is like the interface between Primavera and Eurovision universes.

The next two bands rather pass us by due to the simultaneous arrival of our friend from the Isle of Man, who’s having a couple of days here before heading off to the second Primavera Festival in Porto next weekend, and the single most humungously torrential rain storm ever. What do we do? People run for cover – a friend the other side of the square later reports fences are being ripped down to make shelters – but we’re already as soaked as it is physically possible to be. If we just stand here then maybe it will go away, yeah? More beer? Why not. YANN TIERSEN takes to the stage, his high quality electro-psychedelia perfectly accompanied by additional light(n)ing effects courtesy of God/Science (delete as applicable) before RICHARD HAWLEY winds the whole thing up beautifully.

The words and the weather alike (even though the rain has mostly stopped by now) start us gently on our journey home; the awayday baton is passed on in a late night bar to our Porto-bound friend, and as we clock a few other equally hungover and still wristbanded hands reaching for backpacks from the Liverpool airport carousel sometime on Monday the clocks are once again reset. As I write, we have been back for five days and it has relentlessly shat it down for four and a half of them, but it’s OK – it’s less than 51 weeks before we’re walking down to the Forum Park again with the sun and the sea and the soundchecks welcoming us home.