I don’t wanna be hearing someone singing words all the time on stage I want abstract and I want noise, and I realised I could do that. When I was writing I was changed by that thinking. I mean I like Throbbing Gristle and I’d say “let’s put a little gristle on the twee”

I don’t wanna be hearing someone singing words all the time on stage I want abstract and I want noise, and I realised I could do that. When I was writing I was changed by that thinking. I mean I like Throbbing Gristle and I’d say “let’s put a little gristle on the twee” 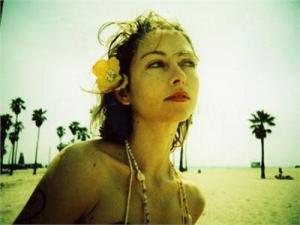 Sometimes – despite the best laid plans, interview preparation goes out of the window. I’m sweating as I’ve pegged it from Centraal Station to De Bailie in Amsterdam, a good half hour’s walk. In De Bailie I’m surrounded by the beautiful people of Amsterdam, groomed, careful in their deportment and achingly, annoyingly, passive-aggressively à la mode. I sit down with a couple of other journalists and before I know it it’s my turn to interview Simone White who – like me is a bit pressed for time it seems, as she’s still toying with her lunch. God, Hamsterjam waits for no-one. White’s LP Silver Silver is a beautiful thing, and she’s here to present it in the form of a round of interviews and a small gig as part of Indiestad – a festival that encompasses a number of venues and doubtless lots of Beautiful People. White is a friendly, open soul, with a frank and easy manner – you also get the feeling quite a tough cookie, not one who will suffer fools gladly. Fumbling for my notes, we strike up a conversation of sorts in the busy restaurant bar.

IN: I was going to ask you about the cover of the record?

SW: Oh really? Do you like it? I have the copy here (Simone turns to pull out the LP sleeve)

IN: So do I… It seems that the provenance of this LP sleeve is a matter of import to all and sundry. I was intrigued by it. I find it intriguing, haunting

SW: That’s why I wanted it on the cover because that’s what I feel about the record. My father took the photo, that’s me at three years old, that’s my mother (who is bending over, apparently in her birthday suit) in the background and we’re on the beach in Hawaii. And it’s a long exposure by starlight. At the time it was really dark and my mother said no one could see me (dissolves in laughter). I think the exposure was about three minutes, so really long. And I dunno there are maybe flies on the plate, maybe the image is partially degraded from time… people think it’s photoshopped but it’s as it was out of the camera. 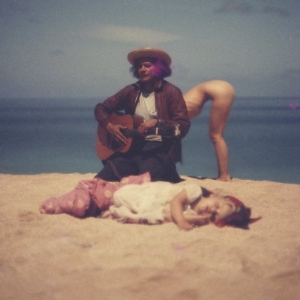 IN: It does look incredibly old and when I first saw it I thought it was a Victorian photo.

SW: Oh man, maybe it’s because of the long exposure, that was very Victorian thing but I wonder if a lady would do that back in Victorian times? (Laughs)

IN: You’d be surprised; they were quite free and easy back then. The cover has an ethereal quality that you can find in the music and such a match-up is quite rare. And this cover was so strong

SW: I know when I send things out I always think ahh, they’ll never see that stuff in the record, they won’t make the connection, and now I know hey it really works! (More laughter)

IN: I didn’t realise you’d had success in the past with the Beep Beep song, it didn’t click. I’d hear it when I was working in the factory and it’d come on…

SW: And I bet you thought, ah now not that again…

IN: Well, now and again (Laughs) but because I never made the connection, I thought “well, what’s this?” when I saw Silver Silver, I thought it looked like a Cocteau Twins cover or something… Anyway, I find it a very wistful record.

IN: There seems to be a lot of situations where you seem to be waiting for people on this record…

SW: I see (pauses) well… a lot happened while I was making the record, two people died who were close to me and, ahm, I broke up with my boyfriend of long standing and fell in love with someone else. So there was like a lot of emotional stuff going on in the background, and of course the record picked up on that. There was a lot of slow brewing growing, organically changing processes going into that record, and that’s how the producers Fol Chen work anyway … We did so many different versions of the songs and I’d hear stuff back and I’d be like, “wow did I do that?” (Laughs). And finally the record just took a lot of time.

…Unlike a lot of things I’ve done in the past I didn’t have a lot of my songs ready. And they were fine with that; they (Fol Chen) said, no that’s how we do it. So a lot of the music was created in the studio. So I was given much more freedom, but at the same time it was a lot scarier… It wasn’t like the relationships I’d had with previous producers, where I’d say “hey here’s my stuff”, and they’d just do it, Fol Chen were like “why don’t you play piano?” and I’d say I’d never played piano but then I’d get on with it and a lot of stuff I did on piano is on the record..

IN: It does feel like a record of moods. You have very precise delineated ideas on certain songs to broad sweeps of noise, a set of opposites – washes of tones and textures. Counterbalance?

SW: Yeah that’s fair and I kind of realised that this is the kind of thing I like listening to. I don’t wanna be hearing someone singing words all the time on stage I want abstract and I want noise, and I realised I could do that. When I was writing I was changed by that thinking. I mean I like Throbbing Gristle and I’d say “let’s put a little gristle on the twee” (laughs)

IN: So this is your Hamburger Lady LP is it?

SW: Haha! Bonnie Brae is a field recording of an ice cream truck that I could hear every evening outside my flat, somehow the way that the sound of the truck coming up the hill and when I recognised it and separated it from what ‘d imagined it originally and it didn’t have the same kind of tune – it was unearthly. Well we recorded it, slowed it down three different ways, patched it up together and you got this strange sound: there it is!

SW: Pastoral is a great word we were calling it electronic pastoral for quite a while.

IN: Interesting when you said you don’t want to hear people singing a bunch of words: your message is in the mood you create…

SW: You need time to accumulate it and then infuse the music I think.

IN: But one song that stands out very strongly is the last one.

SW: My aunt wrote that when she was fourteen in the 1950s, she was a pop song writer, and I discovered this in her archive, and just wanted to make a cover of this song. And you know what? When we stuck it on the end of the record I thought this is just like Her Majesty on the end of Abbey Road – a weird little coda.

IN: Like the end of The Faust Tapes that song by Jean-Hervé Péron at the end, the spoken, pastoral acoustic thing at the end of the cut up madness…

IN: Well if you like Throbbing Gristle you should like the Faust Tapes, released in 1973. (Incendiary perform the task of enlightening Ms White about the Faust Tapes)

SW: That’s when the photo was taken! Synchronicity! Cool!

IN: This record does dissolve into a marsh of noise – is it a reaction to your previous fame with the Beep Beep song?

SW: Well there’s no reaction… I don’t feel weighed down by it; if anything I feel that Every Little Now And Then is a little bit like the Beep Beep song and I love the fact my aunt wrote it way before and that she never played it or anything – and when they cleared her archives I was asked “oh we’re throwing away these old 45’s do you want them?” And there we found it! So maybe there’s some synchronicity there.

After this we take in the concert in De Balie which is every bit as bewitching as the record. And a then a leisurely stroll back to Leiden.