Unfortunately, I tended to hit record. When I next played the tape, I’d discover that More Specials now comprised three minutes of a pissed bloke desperately trying to coax some life out of the old chap, followed by 17 minutes of snoring.

Unfortunately, I tended to hit record. When I next played the tape, I’d discover that More Specials now comprised three minutes of a pissed bloke desperately trying to coax some life out of the old chap, followed by 17 minutes of snoring. 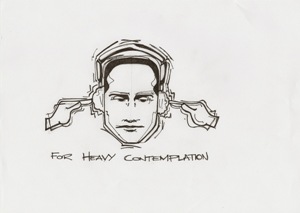 Nostalgia is diverting, although not as good as it used to be. Deception, however entertaining, does not come easy, so, despite contradicting my previous paeans, I confess I no longer own any cassettes or the facilities to play them. TDK was my first love, but I have been seduced by another: an electronic courtesan that’s slim, easy on the eye, very accommodating and anything but cheap.

The reasons for my betrayal are manifold, but, in a nutshell, my new amour simply makes music so convenient. It took effort to build up a record collection, especially if your tastes ran to something more exotic than top twenty. Locating Slow Riot for New Zerø Kanada in Hartlepool was as unlikely as discovering weapons of mass destruction in Iraq. Acquiring esoteric vinyl meant enduring a 60-mile round trip and being patronised by Comic Book Guy’s body and personality double. (Working in a record shop, no matter how recherché, does not make you Ian Brown.) Now you don’t even need to know the title or artist. Remember just a couple of consecutive syllables and you can identify and download it. If you’ve got an internet connection, you’ve got access to almost every song recorded.

Reduced to a lossy compression algorithm and pixelated cover flow, music has become incorporeal. No matter how extensive, your collection will fit on your iPod. Providing aural entertainment for a two-week holiday was a daunting prospect. One that could only be resolved by asking: what songs could you live without? A question that precipitated the sort of protracted period of horse-trading not usually encountered outside of Brussels. I don’t require Forever Changes if I have Never Mind the Bollocks. If I take Substance I can omit Lowlife and Brotherhood: I loathe greatest hits, but they have their uses. And then you’d have to record it all. Preparing for my vacations involved the kind of logistics that should have been utilised before storming compounds in Pakistan. Now you just slip your iPod in your pocket and hail a taxi.

I’m still overwhelmed by the deep psychological trauma I experienced when I forgot to take Setting Sons to the Dolomites, and, unfortunately, the suffering will continue as my therapist has threatened to spray some grey if I mention the incident again. Now I’d just download it. True, it’d cost about 15 Euros, but it’d save me a fortune in psychoanalyst’s fees. Downloads have freed us from the yoke of the cassette, while rechargeable lithium cells have delivered us from the tyranny of Duracell. When I listened to a Walkman, the sheer weight of my tapes, player and batteries meant that if I’d fallen over I’d never have got up. I had to avoid bridges, and steep slopes.

Ethereal tunes are astonishing, as well as surprisingly light, but your music’s physical manifestation could be an asset. What single muso, in a rather literal interpretation of Phil Spector’s wall of sound, hasn’t substituted interior design for 24 square metres of vinyl: a record-lined womb where you feel safe and secure. Also, have you tried skinning up on an iPod nano?

There are two features of the iPod I adore. I can get so enamoured by a song, say Hey You (the Rock Steady Crew), Men at Work’s Down Under or The Beat’s Can’t Get Used to Losing You, that I would record it again and again, over and over, ad infinitum, until the tape was full or my ego imploded. This would enable me to listen to it repeatedly without having to move. (Obsessive and lazy, and I wonder why I’m spending another Saturday night alone writing this.) Now, thanks to the wonders of modern technology in general, and the Repeat function specifically, I can now engage in this peccadillo without developing repetitive stress injury.

And secondly, if you delete your music library, all you need do is re-sync it. This feature solves the problem of one touch record. I dread to think of the number of albums I ruined after coming home two sheets to the wind, collapsing on my bed and pressing play in the futile hope that popular music might distract me from the utter pointlessness of my existence. Unfortunately, I tended to hit record. When I next played the tape, I’d discover that More Specials now comprised three minutes of a pissed bloke desperately trying to coax some life out of the old chap, followed by 17 minutes of snoring.

Listening to such a recording could provoke a moment of clarity, followed by a life of abstinence. It certainly made me consider how I was living my life, although not enough to actually change anything. And as my tape of The Beat’s massively underrated Wh’appen album was returned with a mysterious two-minute gap in Doors of Your Heart, I know I’m not the only person with such a proclivity. There are areas where vinyl and audio-cassette are superior to MP3s. The sound quality of the former being notably superior, but who would choose a Walkman over an iPod? And it is true that the vinyl pressing of Shellac’s At Action Park (as opposed to the CD they ‘gave away’ as a ‘statement’ about the medium’s disposability) is the only way to appreciate its depth and nuance, but try listening to it when you go jogging.

Dangerous Dave is the most ardent audiophile I know, and even he’s abandoned the quest for auricular perfection for the comfort of convenience. When he traded his Linn Sondek LP12, Syrinx LE1, Audio Technica MC5, Audiolab 8000A, Musical Fidelity MC4s and Yamaha K300, in for an iPod (technically he bought a Sony X series, but he’s just being wilfull) I knew then the battle is lost. The tape* is dead, long live the iPod!

Please note: Originally, I was attracted to journalism because of the lunches, which I believed would last longer than the half life of uranium, and involve the planet’s finest wines and tastiest animals, but I soon discovered the profession’s potential for acquiring prodigious amounts of free stuff. So, if by some series of bizarre circumstances anyone from Apple is reading this and feels the need to shower me with complimentary goods I won’t complain**. I like free stuff, almost as much as I like breathing.

* Insert name of once preferred, but now defunct, musical format.

** I’d prefer a 12-core Mac Pro with Thunderbolt display. Actually it’s probably best if you ring me so you get the spec right first time and avoid any embarrassment later. I’d hate to have to return it.

With apologies to Peter Saville