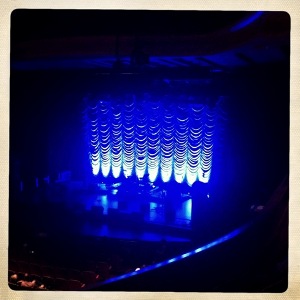 “It’s tough having heroes. It’s the hardest thing in the world. It’s harder than being a hero.” – Lester Bangs, reviewing Bowie’s Station to Station.

I went to this gig fearing the worst. A total “dread of hero slippage” as Bangs called it.

The problem was that Dexys Midnight Runners had once been heroes of mine.

In a different era, in a very different time and place.

Namely, Gateshead, a tough area of the North East of England in the late 1970s/early 1980s. I went to junior school in the middle of a council estate there and it’s hard to comprehend now quite how tribal music and cultural sub-cultures were back then.

One of the standard questions asked of you at the time in the schoolyard or park was: “are you a mod or are you a punk?”. If you said the wrong answer to the wrong person you got your head kicked in. I was 9 and always said “punk”.

Dexys blasted into that world with the street sharp intensity of Geno and it was something you could listen to on the way to football training. You could sing along to the FEELING without knowing any of the incomprehensible words. It made you feel like you could stylishly swerve past the skinheads in the shopping precincts. When I hear that song now, I’m instantly transported to that place again every time. And it still is brilliant – I couldn’t believe how stunning the words actually are after I googled them for the first time after this gig.

Dexys appeal to me largely rests on a fistful of songs which had been crucially important to me at a crucial point in my life – including some of the first singles I bought: Geno, There, There My Dear, Liars A to E (original version) and Show Me.

This music was passionate, uplifting, soulful, ideological, righteous, angry. The wordy ads in the music press gave them a sense of not belonging to the showbiz world around – that they were searching for something else.

I lost touch with the ability to identify with the Dexys muse somewhere along the story. Don’t Stand Me Down in particular baffled me, despite the critical adulation at the time in my beloved Melody Maker. I had to turn the TV off in embarrassment at the appearances on the Tube – which now of course look far ahead of their time.

My mate Neal insisted I go along and witness this gig after seeing them earlier in the tour and saying they were brilliant (although warning me in advance there would be no Geno).

Even so, this gig was a tightrope walk for me as an audience member ex-hero worshipper. At all points, I feared the fall into the abyss of “lame” (ie wedding disco hell – I’m sure I don’t need to elaborate on why Dexys have that association in the public consciousness).

Miraculously, it was a heart warming, euphoric triumph of gig.

The signs weren’t great. It was held at Brighton Dome: the venue where Abba won the Eurovision Song Contest in 1974.

But from the moment I walked in, I thought there was something special about the way the stage had been set up, the way the instruments were leaning against the amp stacks. There was an immaculate attention to detail, filtered through the lens of an iconography of an older sense of cool, the same source inspiring the Northern Soul scene.

Before the band came on, the DJ set was one of the best I’ve ever witnessed, perfectly weighted choices of songs like Breakfast in Bed off Dusty In Memphis and La La Means I Love You by the Delfonics played off what sounded like original vinyl through a pristine sound system.

The support act was a burlesque stripper.

The show was divided into two parts: first half – the new album One Day I’m Going to Soar in sequence; the second half, oldies.

The new album made much more sense to me being played live. It’s a late period career classic, bringing together the various strands of Dexys career into a satisfying whole. It’s very human. It’s still forward looking – Kevin Rowland is the one who believes that one day he will soar as a person, it’s not a tedious self help message to the audience. That coming from a man who has soared higher as an artist than many may dream. It’s brilliant musicianship too – not a shallow, smug appropriation of retro elements (c.f. Jools Holland big band).

Inevitably, this is not the same Dexys as the original line up (though 3 key members remain). Kevin Rowland is still the Mark E Smith of Soul, but nowadays is admitting other counterpoints to vary the line of approach to the audience. The gloriously magnetic Madeleine Hyland’s incredibly sensual stage presence adds a very welcome feminine element and the role played by Pete Williams cannot be underestimated. Promoted from the bass role in original Dexys to be a cavorting, freewheeling trickster, and crucially supporting vocally, both by singing and by explicating what the hell Kevin Rowland is up to this time (“Kev’s just telling you how he feels”). A best supporting actor contender.

The talky bits which made Don’t Stand Me Down unlistenable to me suddenly made total sense and This is What She’s Like was the final and best song of the evening – so great it eradicated entirely my remaining fanboy desire to hear one of my early faves. The spoken word sections were acted out, largely by Rowland and Williams, sometimes involving costume changes (again, leaving me squirming in my seat in fear at times). In this setting, I realised, even in the earlier phase of Dexys, that this element had always been a key part of their vision. It’s working class magical realism. The portal at the bottom of your street. Like watching an old Hollywood musical in reverse. The talking between the songs is the theatre of the absurdity of daily life.

I feel it was a privilege to be there and see them. Kevin Rowland is an artist living in the moment with a true and unique authentic vision, with a brilliant supporting cast.