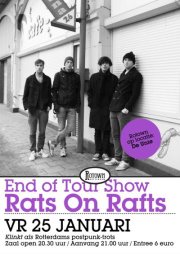 36 hours later and I’m still reeling. That was… well, that was….

And yes it’s a Rats on Rafts review again… no, they don’t pay me, it’s all heartfelt and done for free, and yes, how boring can one man get in his repeated, overexcited ramblings?

I feel I have to write about Rats on Rafts at de Unie because I feel a Rubicon has been crossed, a Gordian knot slashed. Out of nowhere. This was a night when Rats on Rafts finally threw off any pretence of being a “leuk bandje” or a trendy/newsworthy/”controversial” act or any other of those miserable and oversimplified straightjackets that the Dutch media seem so happy to dish out to them. None of that matters now, that’s past, and that’s old, stale, and not true, not worth your time. The gig at de Unie – especially the closing 20 minutes – showed that Rats were a band flirting with true greatness, a greatness that means nothing to trends or fickle fate or agonising about what country they’re from, or any idiotic loudmouth braying hate/support in a comments thread. This was a band realising a sense of space and vision through their music, a band that could both transmit and receive. Heady, heavy, giddy stuff beamed back from rock’s sunlit uplands.

And you know despite everything, despite yourself even, there are times when you realise that you just have to get this sort of stuff down, and face the ridicule, or the wall of silence or indifference or whatever the deflating conclusion is, because even if this is a review – a format where you’re trying to shape your feelings and thoughts in a semi coherent manner for others to chew over – the main duty is to yourself. I can’t let such a brilliant, effervescent night just dissipate away in a cluttered and ill-formed mental mosaic of half-remembered memories or ill-defined feelings.

But I’m running off on a tangent. Let’s add some structure. And let’s start with support for the night, Vox von Braun. It would be unfair to overlook their gig, as it was a very fine set: Vox like Rats and the feeling’s mutual. It’s good to have a great support that dovetail with the headliners, and Vox are currently navigating an energetic phase in their existence, a phase where a fair number of gigs are on the menu, and promoting their brilliantly simpatico record, Rich and on Wheels, seems to be an energising and rewarding experience. Vox’s main strength is their sang froid: they never rush or hurry, their world view is diametrically opposed to the current impatience everyone seems to have with organising time. People just aren’t hip with time it seems. What demons are chasing them? There are still 24 hours in a day, or were last time I checked. Vox feel this and with their stories of freaks from the middle of nowhere and their unhurried, almost punk-hippy way of getting on with their craft they make a quiet, powerful statement that maybe everyone should just get off the train for a little while and start to get their psychic and spiritual radars functioning again. Their songs are fabulous, of course, and it’s good to see that Vox showcased them in the correct manner with a well-paced set starting slow and catching fire intermittently: the mid-section where Lord of Pesetas and Ibiza Style was blasted out was particularly strong.  As usual the band eschewed any sense of theatrics, content to let their rich, intricately textured stoner rock do the talking. Maike sometimes rocked out in response to Jan’s expressive skin thumping, but the twin pillars Wymer and Ben stood stock still, inexpressive, impassive and insurmountably neutral: looking like a pair of dazed backwoodsmen who’d just dug themselves out of a snowdrift. They are still unquestionably “rock” though, and when the lights were dimmed for the last few tracks, the bands’ collective silhouette somehow summed them up, visually: an act from the margins, an act of dark and fascinating depth.   That’s what they need, darkness, lots of it: and maybe a lot of dry ice. We’ll know they’re there.

Best was saved till last: the segue between Dig a Hole, (joined by Spilt Milk’s brilliant vocalist Brenda), and Pitch Black Heart was tremendous and where, by virtue of some pedal manipulation, the sounds are bent elegantly out of shape in readiness for the final onslaught. The sound swelled up, and became a gentle all-enveloping wave of sound that dragged the audience under, towards a sort of sweet, mid tone oblivion. The heavy mob in the Rats audience, (if it’s Rotterdam so expect a lot of well-built gentlemen in black / industrial clothing), nodded onto this; this was backwoods rock they could dig. This was the stuff of café stops in Drenthe or a Saturday morning’s work in the Bollenschuur. Real stuff.

Following that the hall at de Unie – which seemed full for Vox, was in the process of getting rammed. Rats on Rafts have a big following in Roffa, one that straddles all age groups, and their hometown gigs always have a family feel: long acquaintance with many of the audience meant that the social aspect of attending a Rats gig is now a main ingredient to be enjoyed. We can list family, friends, the landlord from their local, the owner of their favourite record shop and members from Minny Pops and Sweet Release of Death; to name but some of the people we happily chatted on to. Of course, they weren’t going to fail. We were expecting a jubilant night, a standard Rats gig full of pop and fun and vigour. Something we could bank on. And we knew their standard set well enough, especially this transitional set that straddles the old and the new – we’d seen it at the marvellous Subroutine “(not) Eurosonic” showcase in Groningen the other week, and also at our 10th birthday party back in late November; we’d seen how the new songs sounded tougher and darker: we’d seen the way their old songs were packaged up and dispatched in a harder, leaner, more cutthroat manner. But nothing prepared us – or anyone I guess – for this gig. Starting with Sleep Little Child and charging into what I have been previously informed is still called New Song there was urgency; a spirit that seemed far bigger than the room informing the band. They seemed like mad preachers, intent on absolutely ripping the audience up. Shredding them.  There was absolutely no concession to anyone, and in that it felt that this was a rebirth, a refusing of their essential spirit, which is all about channelling adversity and anger and talent. It was a breath-taking revelation.

Let’s step aside from my hyperbole: let me try to analyse what was utterly brilliant about this set. Let me be rational and sober, just like my Dutch friends. Musically, Rats suddenly seemed to have solved an awful lot of questions about how their songs perform in a live setting. I put this down to the amount of gigs they’ve done, they seem to realise that they can push themselves a whole lot further. Emma Sofia finally sounded like it had a groove, had purpose, the pretty melody finally manipulated to successfully straddle the crashing bursts of rhythm and counterpoints in the chorus. It sounded groovy, dangerous and timeless pop with an attitude: I turned to co-editor Damian at this point and said – I remember it clearly – “fuck me this could be Mr Soul!” It could. Sailor – replete with Florian’s rumbling, more assertive bass line – sounded like a Gothic rant, a veritable Moria of feelings and inhibition and explosive anger. Moon Is Big sounded vast, the sometimes tinny bluster seemingly kicked out to be replaced by a more urgent, feral aspect; there are tiny little changes in the guitar line and the drum pattern that add to the whole, and they have realised that the stop-start nature of the song can have almost abstract elements of power within it, elements that are just waiting to be exploited. A word about the drumming is needed here too; it was immense, multi-coloured and shattering: creating a rich impasto for the noise in front of the kit. Joris at times seemed to be controlling the direction of the band, seemingly having them on strings – as in a sparkling, spiky version of Plastic Plaster. David’s voice is richer too, able to hold the notes in a more assertive way, whereas Arnoud has cranked up the noise, happy to make scything, industrial-sounding runs on his guitar. Things are getting heavy and no mistake.

All of this was great; all of this was adding to an atmosphere in the room where the audience sensed that they could do whatever the fuck they pleased, and at an unseen signal, the unexpressed, half-formed spirit in the hall burst out during a tough unrelenting take on God Is Dead. A bunch of gentlemen who really should know better decided to start a mosh pit; parents, tough dockers,  scallies, trendy wallflowers all went into the hurtling, scrambling mill of bodies that now got ever bigger as tracks like The Moneyman and Jazz ground people into a state of euphoric frenzy.

Ah yes, Jazz. When people boo because it’s the last song it’s at their own expense, believe me. What with the chugging coda at the end of Jazz the track takes a good 15 minutes to work its magic, by which time most are out on their feet. Jazz this time around was hard as nails; all the sometimes overly coy build ups have been replaced by a juggernaut of noise, propelled by incredible, battering rhythms with a real sense of mission. Jazz and its coda sounded like the ultimate expression of classic, epic guitar rock that lives in another time and space, informed by nothing but its own peculiar, elfin logic. So; epic as Do It Clean’s screaming genius at the Albert Hall in 1983, epic as the Resurrection on that sun kissed ‘89 tour of colleges, epic as Lately’s feral, year zero assaults in ‘03-04-05. That good. Be warned.

Off they went to an audience who screamed for more in relief and release and wonder. Incredibly back they came, and took Ty Segal’s Pretty Baby and slaughtered it; as Isaac slaughtered his best rams to Jehovah. They pulled the track to pieces, showed it how it could be played, and rendered Segal’s muse utterly irrelevant – at least for a short while. The guitars heaved and groaned and spat out huge metallic gobbets of rough sound, Arnoud seemingly amplifying a chainsaw instead of a Fender…  After this deconstruction they were gone and all of us went about the giddy and apparently impossible process of reassembling ourselves.

I suppose that night was a reaffirmation of why I feel drawn to write about bands I’ve seen, or records I’ve heard; despite what I feel is a growing disinclination to read this stuff… But fuck that. I still feel live music is the most direct and mercurial of art forms: fusing as it does art and good old fashioned entertainment.  Rock music unlocks a basic shamanism, an appreciation of the here and now, of receiving and transmitting. These are the essential ingredients in your spiritual and corporeal selves, the balm to your soul, the gateway to your spirit, guard them well. And you know, one day you may just get moved.