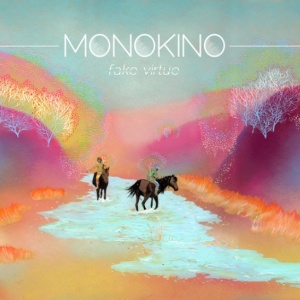 Monokino have a new record out! Great! We liked the last one a lot, the combination of clever, mercurial synths and their kitsch worldview (propped up by some faintly daft but always sharp lyrics) hit a chord somewhere. The cover gives it away here, too; a ridiculously over coloured scene of horses and riders crossing a river, looking like a sort of booklet for the Jehova’s Witnesses.

Weird? Not unexpected and doubtless there’s an in-joke in this queasy image and the LP title somewhere.  I’ll stand by an old observation I made of them, that they are a loner’s band and as such best enjoyed in the confines of your bedroom. Somehow their ideas and observations don’t fully translate to use in the world outside. I’ve seen them two or three times and somehow their Valkyrie take on pop’s back catalogue doesn’t feel the same. But never mind. Highlights on this new release are Living For the Chase, and Follow, both of which are great pop songs, a little bit strained emotionally maybe, but crisp sounding and cleanly cut from Pop’s ever giving Yggdrasil. Following that is Melissa, a cut that is in essence a ridiculous appropriation of a whole basket of ideas: harpy-like synth stabs, Pet Shop Boys knowing bombast. You name it.

Around the third song you can’t help but noticing that the record loves – no that’s not quite right, let’s say the record is infatuated by that 80’s chart-bound sound, though it doesn’t really do much with it outside of harnessing hods of bedroom angst to the whole thing. Rebuilding The Wall comes on like Stephen Tintin Duffy. Seriously, I do not joke here. Elsewhere, For The Summer, and Hard Syncer start to waltz unsteadily towards an appropriation of Shellshock-era New Order.  And I thought they’d nabbed the beginning of The Cutter for Follow. But fine, it’s a good listen. And at times it starts to sound truly anthemic, like on the closing track Eurosonic.

All in all, good pop fun.