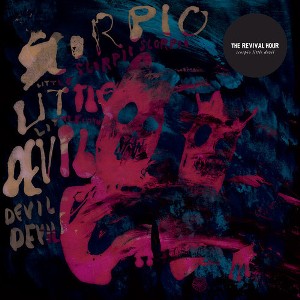 Well this is something: something we missed. How stupid are we, because this is a record that gives a lot of things, I blame the cover, as – quite frankly I think it’s shit and I just ignored the record for ages. Still DM Stith is a fine artist and this collaboration with John-Mark Lapham, under the name of The Revival Hour is worth your attention.

One thing you will note is the vocals being constantly in a high register and pretty soft: it’s not a bad thing, of course, but just something you will have to deal with. Because the rest of the sound is so rich, at times so dense or complicated, and the subjects matter seemingly so theatrical and full of bombast and import, it does mean that you lose the thread of whatever narrative is being expounded. At its worst you can get lost; your feet stuck in the sticky textures and maudlin over-stylings, and a bit turned off by the whole thing. The instrumentation for Hold Back, for example, sounds like something Shirley Bassey’s vox would strangle at birth. Pyre is a funny mix of Showaddywaddy stomp and ghostly, Johnny Remember Me melancholy. Riverbody is a huge-sounding weepy, akin to a Wally Stott arrangement: Cinematic, rich, in love with Spector-esque pop and at times pretty knackering.  Elsewhere things start to get plain daft: Copper House is a wild rush of squealing vocals, fat and fuzzy bass tones and a whole host of strange noises. It’s good but it’s a track that does confound expectations. Once you get your head round the sheer proliferation of seemingly disparate sounds it’s one of the stronger, more intriguing tracks on the LP.

The pressure to let go, to get a bit looser and wilder continues to mount as the LP plays on. City Yolk, Eyed The Beast and I Swear I’m Clean are similarly disconcerting, and a bit more sinister despite the big, poppy hooks. At this point the record’s shifted from its straight enough homage to lush 60’s pop to being something much more interesting, it’s actually a record that gets better and better as it goes along.