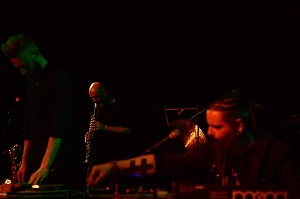 A change of temperature led to a change of tone. It had been hot for September; and consequently we had cavorted about in the sun, drinking a wee bit too much in the process (as a cooling mechanism, I hope you understand). Sunday, however, dawned overcast. A day for reflection and a slow start. Interview duties meant we sadly missed The Afterveins and The Sweet Release of Death in the Zero programme. Still we moseyed on down, Magnuson style, to the pop up shop Consouling Sounds to take in ThisQuietArmy who was sat on a mini podium in the midde of the space. Around him people gently grooved, nosing through the record boxes or idly flicking through the cards and literature on show. A perfect start to a reflective day; and one that ThisQuietArmy, replete with a battery of pedals and other electronic paraphernalia was determined to shape. The sound was that of living in the womb or maybe the backwoods; a pre-sensual time and space that the guitar textures coloured in. This approach created an impenetrable and opaque vista in places, and the sound was akin to applying large impasto sweeps on a canvas. It was never boring or difficult though, as ThisQuietArmy obviously likes to explore slow burning melodies that please and soothe along the way. Behind him, and there to add to the emotional impact of his work, some suggestive landscapes flickered and changed on a giant screen; regularly morphing into other images that were equally melancholy. A brilliant gig in the context of this particular time and space, and one we’re glad we caught.

Seeing the Saturday at Paradox was SUCH a fucking hang, we decided that we would base ourselves there and go nowhere else, unless pushed. This meant we caught Talvihorros, who we are big fans of. Ben Chatwin’s last LP is a belter, full of suggestions and whispers as well as beautiful, tough passages that are built round simple repeated hooks. This was the first time we’d seen him play without the remarkable visuals that usually form a strong backdrop to his work; and that lack went some way in allowing us to fully focus on the music. There seems to be an element of the spy theme or film theme about his work which in turn made us realise how much Talvihorros’s current sound has in common with early Popol Vuh. Maybe they share a patient and reflective devotional element; a spiritual edge that looks to heal and reassure regardless of whether the subject matter or the driving force in the music is from a darker place. There’s definitely a feel of spiritual uplift going on. A very fine gig indeed.

Following that a beer and…. Poland’s Baaba. How to describe the four lads from Baaba? Difficult; their music is an absolute mash of jazz fusion, a cleverly under-powered funk and “grow your own trance” that has a bit of Snorkel in it. They look like they sound too; collectively rocking a ragetty “never gonna grow up” student wardrobe; an uncoordinated mix of shell suits, tenor sax, apple-macs and geography teacher slacks. In essence it’s all a bit Play At Home, or a bedroom take on Squirrel and G Man‘s template (without the vox) but that’s totally fine by us. And their sound is so organic and loose, it’s almost (but inspiringly) incomprehensible to us that they are able get away with the things they do. During the gig, great semi-hard on rock shuffles with nods to Holger Czukay’s solo ventures would break down to become absolutely nothing at all; only to fire up again into an increasingly sure-footed swagger that was so heart-warming you couldn’t help but dance and cheer it on. It was absolutely fucking brilliant and we loved them.

Fuck! We’d just realised that we’d have to leave our Paradox bolthole to catch the Dead Neanderthals Endless Voids showcase-cum-collaboration-cum-burn-out at Studiozaal, Theaters Tilburg. Initially we were a tad reluctant to go as Paradox was such a cosy hang, but hell’s teeth this did promise something different. And once inside the venue (which was incredibly dark) we adjusted with an increasing amount of pleasure to the ever evolving World’s Ending that the eight musicians were mapping out for us. Basically this was the sound of the after-burn AFTER Ragnarok has hit home. And looking at the “band” you’d have expected nothing different. This was a boatload of Dutch Long Hairs and Sonic Vandals (some of whom we knew from different bands, others who’d been dragged screaming from under their Hunebedden) brought together by the lads from Dead Neanderthals. Lined up in two banks of four they proceeded to question time itself by nailing their demands on the gates of the Underworld. Seriously, time COLLAPSED in the Studiozaal, and this was as near as dammit the greatest thing at the festival; simply because it felt appropriate to any time, any space. If this High Magicke was being played throughout the saunas and gyms of the Netherlands instead of that New Age/Sky Radio guff we’d ALL be Righteous and Hanging. Fuck we need to chain Rita Verdonk, Giel Beelen, Gerty Wilders, Albert Verlinde and that baldy chubby jolly bloke who does the Albert Hein ads during World Cups in a darkened room and FORCE them to sonically ingest this. A total mind-map of future past and our festival highlight.

After this it was back to Paradox for Basic House who laid down a set of vacuum sealed noises for the nihilistic among us. The sound was weightless, it knew no time space or context. Essentially, Basic House (an unassuming, bearded gent from Teesside) used the gig to create the Sound of the Void. He was its embodiment, if that isn’t too much of an oxymoron. There was NOTHING human in this gig at all; well… maybe human-made, the sound of a deserted refinery or dry dock perhaps, but in any case a desolate, pre-natal zone-out that changed only by increment. We did get some heavily treated church bells sounds about forty minutes in. That, however was it. Another spiritual clean out.

At this point we broke. Bombino is ace, as are Thee Silver Mt Zion, but no, we needed Leffe Dubbel to put some humanity back into us after Basic House. We stuck around Paradox and watched final act Poland’s Hokei blast out a loud and sometimes brilliant set that drew heavily on the spirit of Fugazi and Warsaw; as well as a good dose of no-nonsense Polish screaming and synchronised drumming. After Hokei, a dodgy knee flaring up meant we had to curtail out activities and forego the after party which I really don’t want to hear about through green eyed jealousy. Incubate, you really do never cease to amaze.