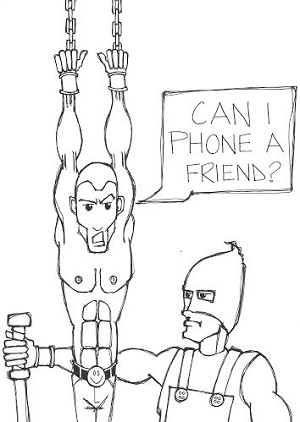 The bulb flickered, reflected scintillating off the blood-spattered rubber. He stood before me, fish-eyed, unblinking. It was hot, oppressively so. Why wasn’t he sweating? The surgeon’s green garb, chain-mail gauntlets, heavy-duty apron and skullcap, would be stifling in an igloo. A cruel smile formed on the thin lips he slowly licked, before pulling up his surgical mask. He turned away to study the stainless steel table adorned with sharp shiny implements and power tools. An ominous glance over his shoulder signalled the end of the excruciating scrutiny.

Facing me once more, he opened the pearl-handled cutthroat razor pointedly. Detached, he ran it slowly across his cheek and repeated the question. ‘Are you sure?’

‘I know nothing,’ I croaked, throat parched.

Helpless. Prone. Naked. Arms and legs secured with Gaffer tape. Struggling was futile. Pointless. I tried anyway: sinews straining, tendons tearing. A psychopath approaching you with malice aforethought is acutely motivating. (Something not covered in the unfinished self-help books intended to end my indolence. A gap in the market I intended to exploit… assuming I survived.)

Amused by my struggles, he waited patiently until I collapsed, struggling for breath, choking.

‘Coughing didn’t work for Ingrams. It won’t work for you,’ he quipped, eliciting a chuckle chilling enough to freeze lava from the immaculately coiffured female swathed in shadow.

‘The editor told… demanded those articles were written. You want his address? It’s yours,’ I implored desperately.

He advanced, slowly, silently, until he loomed menacingly over me like a demented dentist.

‘I didn’t mean to insult you, or your wife. I owe you awe, not derision,’ I begged, transfixed by the seriously sharp blade glinting before my eye.

‘Is that your final answer?’ he taunted.

‘Please you don’t have to do this. I just want to go home. Please let me go. I’ll do anything you want. Anything. We could go pony trekking. The Golan Heights are beautiful this time of year,’ I howled hysterical.

Eye held open with thumb and forefinger, he drew the razor across my pupil… an epileptic eel in a strobe, my body convulsed and far away someone started screaming. My eyes! My eyes! My beautiful green eyes… were open and staring at Chris Tarrant’s flickering image.

‘Yes it is. The answer is Lady Diana,’ the contestant declared confidently.

‘Classic Who Wants to Be a Millionaire’; torture would be a welcome relief.

Like most, I considered converting the Phelps women to Lesbianity the hardest thing in the world. Compared to waiting four weeks for confirmation of Barry and Asthma’s Eurovision entry it was elementary. Shipwrecked on my sofa, I drifted from day-to-day, lulled into submission by the televisual carousel of mind-numbing diversions. However, my limit had been reached. A job-share with Theresa May was more appealing than another moment of banality. A bath was in order. Time would pass quicker there and it had to be warmer.

Dressing gown pulled tight against the gale whistling through paper-patched window, I padded slippered into the hall. Pausing to check the thermostat, something white against the doormat caught my eye. An envelope?

I rushed over. Textured white-linen envelope, hand-written address and was that a whiff of fondue and Nazi gold? The provenance was evident, especially considering the wax seal embossed with the hallowed crest of the European Broadcasting Company. The long wait was over.

With the finesse of a surgeon my stiletto disembowelled the dispatch, enabling me to eagerly devour the missive. Just as I had deduced, the Assads had entered Eurovision. People had declared me mad for simply suggesting something so preposterous, but when you have eliminated the impossible, whatever remains, however improbable, must be the truth.

This seemed too easy, that or my powers of abductive reasoning were far greater than previously supposed. My ennui evaporated, replaced with the overpowering urge to wear a deerstalker and inject a seven per cent solution of cocaine.

I poured myself a double reward and read more. On 2nd May 2014, eight days before the final, they deferred for a year. Intriguing. Why would they go to all that effort and then defer? And why hadn’t they adopted pseudonyms?

Overleaf, another surprise. I’d assumed they’d perform a nauseating duet like Islands in the Stream, Sometimes when we Touch or Whispering Grass. (The Don Estelle take’s not too bad – Ed) The smart money was on was Renée and Renato’s bistro classic Save your Love. Instead they’d chosen Chemical Warfare by the Dead Kennedys.

An exceptional song, but an extremely odd choice for family favourite Eurovision, especially considering the resounding ‘nul’ points the Sex Pistol’s Holidays in the Sun received in 1977, and that was pro-Europe. There was, however, a perverse logic evinced by this controversial choice. Perhaps Assad wasn’t the fool I’d taken him for. Perhaps he would prove a worthy adversary after all. If I’d had a pipe this would’ve been the perfect moment to light it.

Perusing the letter once more, I spotted something I’d missed. A postscript stating that my cheque had bounced. That, at least, was expected.

Next issue: Controversy, what controversy?