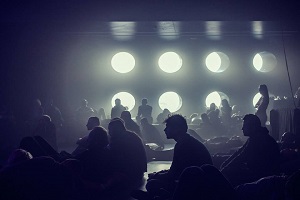 The day dawned bright and clear. Couples quietly went to church in Utrecht’s beautiful city centre, and the first tourists (catching those early trains from Schin op Geul or Delfzijl) were wandering round waiting for the museums to open. We went straight to Vredenburg just in time to see a whole bunch of Hairies with stars in their eyes stagger out of the building watched by the bemused security. How to police a bunch of sitting droneheads? An officious order keeper’s worst nightmare I would have thought. Truth be told I was a bit starry eyed as well, and all the moreso for walking into a bloody great pillar, right in front of a wondering cleaner. Scraping what dignity I had up off the floor I hot footed it straight up to Pandora to get on down with the Ashraf Sharif Khan‘s wizardy on the sitar; a raga experience which was mesmerising. Light flooded in through the Pandora’s round windows. We zoned out. We could have been docked on the one of Jupiter’s moons, or looking out over the Rajasthan plain. Following more Drone DJ Art-Zoyd wipeouts, we grabbed a coffee, and gabbled on in yakspeak to a frankly baffled 3voor12 bunch (their eyes seemed to say, ‘has Richard been to the moon & back?’) and got back in for a BRILLIANT passage called The Gaudeamus Drone Experience, featuring Leo Fabriek, Gareth Davies, Rutger Machinefabriek, Wilbert Bulsink, the Fox String Quartet, Koen Kaptijn and Maarten Vos and a whole bunch of other NederHeads.

I just can’t do this showcase justice. I just think trying to describe what feel like out-of-body experiences is the worst thing going; but I CAN say this was a mind blowing, inspiring and very drawn-out three hours that was, by turns, light, fuzzed out, and fathomless in its depth. It also showed off how fucking great the Netherlands’ ambient/drone/fusion/ambient noise scene really is. Man, these cats are out there. The thing started off with the maddest, deepest and most WOMBLIKE noise imaginable; a sound of echo chambers, of resonant underwater orchestras, of Victorian ghosts trapped in a playroom… you name it. Over the following three hours the scene moved on through passages of abstract white noise, and some gentle tussles with film (courtesy of Machinefabriek) through other passages of the most drugged-up wind instruments you’ve heard and ended (for us) with a beautiful Naomi Sato set built round the sho. That was mindblowing; this quiet, traditional Japanese instrument put through its paces in a setting that was a million miles away from any assumptions as to where you’d expect this music to be heard. You could hear a pin drop.

During the drone out, we managed to catch Sleaford Mods and Steve Gunn do energetic session shows. See, this was the beauty of the whole drone scene; you just logged in or out when you needed to, it helped refresh the mind rather than zonk it out.

Back for more drones! After the Drone DJs had prepared the Telepath to Galaxy 12, Dirk Serries came on and wrecked time itself with a brilliant set built round a whole heap of loops and phasers. The audience were pinned down like butterflies on cards; it was incredible and again, it’s impossible to do justice to the show in print. Somehow though it does feel as if Serries, who has been releasing things for years under a number of monikers, is now getting the credit and attention his work deserves. After all, we live in an age where we have become detuned enough to  accept this  kind of music, and in fact need it, as a sort of prompt to enter our own emotional and spiritual hinterland where we can rejuvinate our spirits. Maybe we’ve just caught up with the raga, after centuries.

Pandora filled up for Juliana Barwick, whose LPs seem to be fun and flighty snatches of sweet nothing, but have a hidden, often mesmerising power to them. Here, playing Calypso to a bunch of half pissed, zoned out Odysseuses, Barwick toyed around with a few phrases and hooks, and steadily built up a set of chiming, cooing, breathy sounds that were as light as a strip of gauze. People crashed down onto the cushions, thinking of their first dolls and teddies. It was also noticeable – especially when Juliana Barwick’s set kicked in – that the whole event’s ‘aural timbre’ (so to speak) had gone up the octaval range as the sun’s light had diminished. We were phased, and went for a pint.

Back in time for James Blackshaw mind, who laid down the law in the most laid back manner. Sitting cross-legged, and starting off by telling us the odd gentle self-depreciating joke, Blackshaw started to build up a gentle, shimmering, but almost cavalier sound; the twists and turns in his playing (sort of) keeping you on your toes in this most relaxed of settings. Blackshaw’s playing was phenomenal, able to take a thought (seemingly sketched out with a few plucks and thumps on his 12 string) and expand on it, creating these lace-like patterns that were impossible to escape. Fucking hell we HAD to escape as we had to check Sleaford Mods. We’d been denied entry into EKKO on Friday and were not up for running into the same set of bouncer-related issues again. Incredibly the place was empty. And no bouncers on the door. Fine; best thing ever. It also meant we could pick a spot down the front for the Mods who sauntered on and blasted out their set.

Now this is the first time we’d seen them; and whilst really enjoying their music, we’d kept a distance, not bothered to review and just enjoyed the LP and the EP. Thankfully, (and I suppose predictably)  they were great live; all we’d imagined and more. The whole set was a sort of Trumpton style clockwork frenzy, built round Jason’s splenetic strutting and twitching, and Andrew’s laconic beer-in-hand slouch. Like the other great current UK act, the Fat Whites, you couldn’t help but get sucked in to their worldview.

Behind us we heard a few braying Lincolns Inn accents which set the odd alarm bell off, but fuck it, promted by a pal, I let the moment slip and my hackles went down. It’s weird, pathetic, getting self righteous on the band’s behalf. Journalist cunt, you could say. But whilst I really get the fact that it’s lots of fun on one level, and you should laugh along; and that the gig was a scream when Jason started to get all pop eyed and sweaty (walking round in a circle  like a turkey cock on speed) this is a special band. And I would hate them to be seen as a one-trick idea built round a lad mouthing off over a soundscape. It’s not that at all. The Mods dig deeper paths than that. Like the beggar whispering in a Roman general’s ear at a triumph, their role is to remind the pumped up hedonists and egoists of society’s murkier bits. They simultaneously speak truth to power, and shred the bullshit nonsense that propels, and giftwraps the Lad Kulturkampf. The e-numbered and 24 hour garage shit that ‘British Life’ never seems to be able to scrape off its shoes. On the evidence of the gig, there’s also this speaking in tongues thing going on; not far from the angry stuff Blake or John Wilkes would come out with (or Blake & Wilkes mixed up with Bobby Thompson and Al Read). Tiswas and Bob Carolgees & his hand puppet mutt were crap, and yes there is far too much urban toss. Knowledge is power.

Maybe some of the band’s audience won’t, don’t, or can’t dig as deep as they do. (Thing is these braying donkeys laughing at Tiswas references are the same ones who let MES get away with murder with his whole, ‘sitting behind an amp grumbling’ act, and call him a genius! Numpties all.)

Ach. Maybe I’m getting a bit carried away. Here in EKKO, it was blazingly, burningly, obvious that they were a special band, sweat, warts and all; fired by native intelligence and no fear. And regardless whether the well-heeled urbanites got all of the references, or were there to gawp at the latest sensation in the manner of some fops baiting a caged Gibbon in Vauxhall Pleasure Gardens, they had to make way for the volleys coming from the EKKO stage. The Mods are far out. And it was fucking great to watch and well deserving of the 2 encores they got. Can’t wait to see them again.

We got back in time for Stephen O’Malley‘s grinding growls in Pandora which closed the Dronefest. Faced with a wall of buzzing amps, O’Malley made us feel like we were trapped inside a giant hoover. We couldn’t face the silence of  the ending and got the last train outta Utreg.

Fucking whacked we were and no mistake. But hell, what a festival. Nuff said.