Using a peculiar hand motion as if blowing the song out onto his hand to inspect it, Dawson laid down the law with an incendiary set.

Using a peculiar hand motion as if blowing the song out onto his hand to inspect it, Dawson laid down the law with an incendiary set. 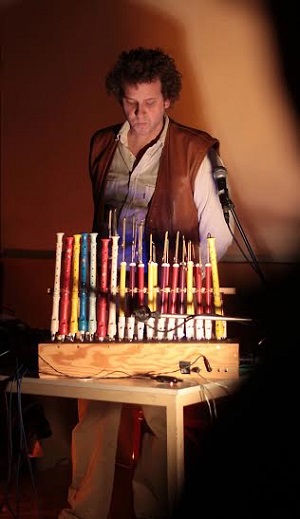 Vrooom! I’ve been meaning to go for ages, but a combination of slacker behaviour on my behalf, bad luck and (frankly) “hippy marketing” from those at Vrooom! has meant we’ve never crossed paths until now. And sadly we’ll never see the old gig space, as Vrooom! is on the move. Luckily the new location, a space called the old “Post Office” in Rotterdam North is a beezer; a groovy space under the railway arches, suitably distressed and makeshift, and thrillingly suggesting the ghost of a whiff of “Eastern Bloc chic”, for those who are into those sort of things… Enough. Shit was cheap, and the crowd was pretty cool. I’m definitely coming again.

We were here to see two acts; Frisk Frugt from Denmark and Newcastle’s very own Richard Dawson, whose last LP Nothing Important was a staple on the Incendiary player in 2014. We’d never seen him play, though and, having been badgered enough by goggle-eyed reports on how great he was, were determined not to miss him this time.

But first a duo, Blaast, who created tremendously soothing passages of white noise from a set of laptops and other nobs and buttons and electro ephemera. So soothing, that Incendiary fell asleep from the opening drone, and remained asleep the whole way through. Given that we’d been running round like blue arsed flies all day also had something to do with it. We grabbed a nearby chair and plonked ourselves down; allowing the warm, semi-lit club and the ever-giving drones do their worst.

After such a slumber time experience, coming round to see a man looking like a 1950s geography teacher playing with a set of wired-up recorders by way of plunging some metal stick down their bodies – no I’m none the wiser either – was a tad too much. And all the while with his arms clasped behind his back. Now, over the years I’ve seen some “odd” beginnings to gigs but this one really takes the biscuit; mainly for its sheer unobtrusiveness. Frisk Frugt (or Anders Lauge Meldgaard to give him his real name) happily listened to the reedy, plaintive results, watching on as if observing an experiment in a Bunsen burner. We sat there in bemused silence, wondering how long this test would continue. A good five minutes if you were wondering. Still; things changed fairly rapidly later on, and for the better as the quality and breadth of his music is astonishing. We got folk songs bawled out in Danish, poppy, semi-electro passages of quietly modulated funk that really could have been lifted off the Ralf und Florian LP, wild pastoral melt downs that could have come from Faust’s first LP, and wibbly noises and howling invocations. Somehow the bric-a-brac nature of things was remarkably focussed, and not at all self-indulgent. A remarkable gig really, and one that, when you gave it a bit of headspace was truly out there. 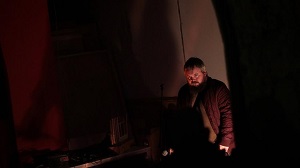 From one mad wizard to another. Richard Dawson is a genius in our eyes; a poet and a true scholar of these times, but – like Blind Jack of Knaresborough – one whose secrets are bound to follow him to the grave. A funny chap, and obviously 100% genuine, Dawson has an act that nevertheless uses a hard-fought for eccentricity as a very handy lamp post to piss against. His demeanour is at one bookish and feral; an absent-minded prof who’s been reborn as a militant allotment owner. I’m really not sure whether anyone else could emulate the mix of faux-Viz comic aggression and real social anger, or the goggle-eyed cowpat prophecy and dafty wit, Stan Laurel-style.

Using a peculiar hand motion as if blowing the song out onto his hand to inspect it, Dawson laid down the law with an incendiary set. Unaccompanied ballads about walking through Yorkshire, the library, or hanging (a cover of Shirley Collins’ Geordie) were balanced against Bone Machine-style break-downs on the guitar; including a killer take on The Vile Stuff, one of his truly great tracks. He’s an incredible player; the sort of noise any non-practising non-musician aspires to, the sort of total deconstruction of all music as a healthy counterpoint to classical musical accomplishment. Highlights were the aforementioned Vile Stuff and another string kicker, Judas Iscariot, as well as the “classic” Wooden Bag. And the atmosphere. The room loved him, clapped along, went as silent as a mouse when he dropped the tone. What a gig. Frankly this could have gone on all night. Vrooom! should have kidnapped him and forced him to stay for the week. I’d have gone every night. 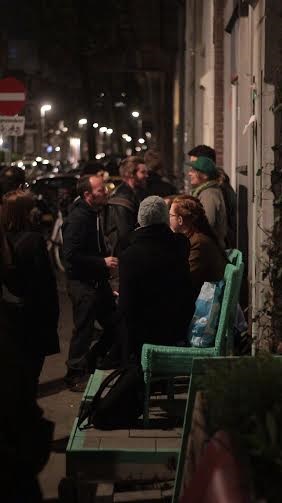