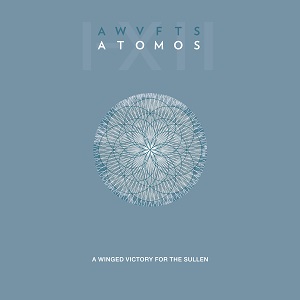 What to say about Atomos? Well, for one it is a brilliant record, and one I should have written about yonks ago. But somehow – probably because Atomos seems to exist outside of any known time – I kept putting off writing a review of the record in favour of playing it. I got so intrigued by its sense of otherworldliness that I played it against their first, eponymous LP, which was (and is) great, to work out what the magic was. I finally came to some sort of conclusion based round an idea of capturing a real (as in “true”) sense of time. For, whilst similar to AWVFTS in many respects, Atomos operates on another, maybe parallel level. There’s a sensibility about this record that isn’t forced, or nervous, or concerned with context.

Whilst  Atomos is much poppier than their last one, it also boasts a greater sense of gravitas and remove. It actually feels like a “tragic” record, a “noble” record; imbued with an irradicable sense of memory, in the same way that side two of Bowie’s Low is. The piano-led reflections of III and VIII spread serenely outwards, like ripples on a lake. The record is drenched in atmospheres of other times; IV is a brilliantly spooky like tiptoeing through the amber room, or a scene out of Russian Ark. And V is a beautiful a ghostly clarion call to some legion, lost in the woods. Things swell up to a climax by the end; the subtle shifts in harmony and texture in tracks like VI and threaten to overwhelm. In fact, VI could be off the Death in Venice score, it’s such a potent piece. IX is a beautiful, shattered lost radio broadcast finally getting through. It’s so beautiful that I want to play the fucking piece, amplified to the max, round my town. Just to get people thinking, seeing, communicating, differently… Everything ends with the climactic last three tracks; X having a Nymanesque plod to it; which sets up the afterthoughts of XI and XII in turn. After all that you really need a little time to yourself. This record is incredibly powerful. Possibly AWVFTS’s masterpiece, poor them.