Michael  Hampton walks on stage, wearing the kind of luminous green sweatshirt normally reserved for stewards at a football stadium. A grey dreadlock falls across his face as he takes off his sunglasses and straps his Fender over his shoulder. He plugs the jack into the guitar, waggles his fingers as if to have a brief warm up, and begins to play. 20 odd minutes later, he looks at his arm as if to say “How long do I have to do this shit for, man?” and brings a very heavy but incredibly psychedelic Maggot Brain style extended opening jam to a close.
END_OF_DOCUMENT_TOKEN_TO_BE_REPLACED

Damian: We have to marvel at the sophisticated level of camping that the average German festivalgoer achieves. Listeners to the Incendiary shedcast will have heard us tell tales of fussball tables, sofas, DJ systems, party tents and even, at one point, a fridge. When these guys go away for a weekend they certainly don’t pack light. Perhaps that explains why the camping area mostly resembled a car park this year. Hundreds of cars all lined up neatly next to one another, extremely well organized and arranged.
END_OF_DOCUMENT_TOKEN_TO_BE_REPLACED

Damian: Day two began in the bar. Quite literally, as Gary took to the stage in the Haldern Pop bar, situated in the centre of the village at around One o’clock. Now, playing rock and roll at that time of the day is a problem for most bands, but Gary? Well, what can we say about Gary?

END_OF_DOCUMENT_TOKEN_TO_BE_REPLACED 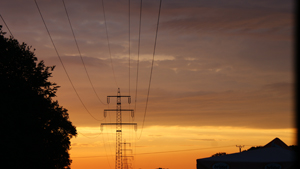 Damian: People often talk about the feeling of ‘coming home.’ Billy Connolly once said that when he stepped off the train at Glasgow he could feel the city seeping into him from the feet up. Something similar happens to us at Haldern. It may not be a true coming home feeling but it’s certainly something similar. It’s why the Incendiary crew act like idiots in the car on the journey across the border. The excitement builds within us as the car, creaking with the weight it’s having to carry, opens up on the autobahn, accelerating toward this small area of the Neiderrhein at a rate of knots that’s totally offensive to Dutch traffic regulations. Once we’re there, in the camping field, we can feel Haldern start to seep through our feet. Or maybe it’s just the cow shit, we’re not entirely sure. What is sure is that the first night of the Haldern festival is always a treat.

This year, however, things got off to a slow start. The first act of a festival always draws the short straw and this year that ‘honour’ went to David Frost. Now then, there’s nothing particularly wrong with Mr Ford’s music as such but it’s easy to say that it wasn’t really our cup of tea.

Richard: I think you’re being a tad unfair there. Frost is best described to those who haven’t seen him as a singer-songwriter. This status necessitated a switch of roles through the set; cheeky chap, soul-boy balladeer, tap-room soak and rough diamond… all played to maximum effect.

Damian: Well, it seemed to me that he was yearning to be the new Bono but came across as the new Bryan Adams and, to be frank, I’m not really a fan of either so, while he didn’t really offend me, there wasn’t really anything memorable about his show, apart from the drummer’s Stetson hat.

Richard: That bloody hat! It’s just me I’m sure, but I really don’t think wearing hats indoors should be promoted. Let’s be honest though, Mr. F. did what he was supposed to do as the opening act, he put on a passionate show and set up a good honest vibe so job well done.

Damian: Fair enough, he still reminds me of Bryan Adams though.

Richard: Staten Island’s Cymbals Eat Guitars were up next; a brave choice given their pugnacious art-rock leanings. Despite the math–rock elements, their record Why There Are Mountains? is a very good one and their Pavement vibe is respectable and fashionable enough to hide a number of sins elsewhere in their make-up. The gig was good fun but, to be honest, I enjoyed the set a lot without being struck by it; or remembering any moment of import.

Damian: I don’t remember many cymbals and nobody ate a guitar.

Richard: At this point, the doors of the Haldern Pop bar opened in the village and The Black Atlantic were taking to the stage but frankly that seemed like too much of a hike to endure at this point in the evening. Besides, we’ll talk more about The Black Atlantic in the Day Three report. 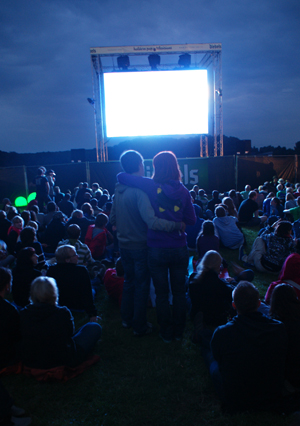 Damian: We waited patiently inside the Speigeltent to get a good view of Beach House which proved to be a pretty foolish idea as Beach House basically filled the stage with so much dry ice that they were, for the most part, invisible. They did have some interesting stage furniture though.

Damian: Weren’t they blue? Whatever, it’s obvious that they’re trying to drum up some kind of mystical energy but there wasn’t much of a show.

Richard: No, and at one point you turned to me and said, “very good music, but I’m not standing here watching pyramids for half an hour,” and scuttled off outside. Still, they played the brilliant Zebra and so all was pretty much forgiven by us.

Damian: Exactly. I can’t find much fault with their music. It’s very good in fact, but I wanted something a bit more visually interesting than the set of an old 50’s B movie. Actually, I enjoyed the gig outside more than I did inside. Outside, although there was a gigantic queue of people trying to get into the tent and large queues of people waiting to buy beer tokens, the atmosphere was very pleasant. The large screen showed us the little visual information we were missing but the speakers carried their music up into the night sky and it was absolutely lovely to just sit around on the grass and listen to them. I really enjoyed them actually, and would heartily recommend their album to anybody, but I wouldn’t rush back to see them as there’s simply not much to see. Next up were Chapel Club, who basically took the crowd back to the 1980’s while I went to grab some food.

Richard: They could (or should) be produced by Stephen Street, such was the vibe of suede coats, quiffs and paisley shirts. Still, it was okay: we liked it, they made a pleasing racket and the singer has a very good voice indeed. But we all know that more is needed: let’s say we could like them a lot more – given both listening time and a more definite appreciation of the band’s personalities.

Damian: The chicken noodles were very good too. 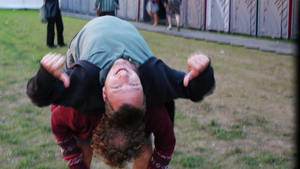 Richard: The following act, I Blame CoCo turned out to be Sting’s daughter.

Damian: You should just end your review there because your judgement became slightly clouded when you discovered that fact, it must be said. Thankfully she isn’t half as annoying as her father and it’s not her fault she was lumbered with the name of a hot drink. Don’t blame yourself Coco, blame your parents. In fact, she was rather pleasant and her songs, while pretty straightforward and occasionally twee were entertaining enough.

Richard: Apart from that one moment where she was completely out of tune.

Damian: Yes, there was that. Anyway, she passed the time well enough. Things soon perked up a bit though and we even ventured back inside the Spiegel tent to watch Seabear, who were simply fantastic.

Richard: Sin Fang Bous, the lead singer of Seabear is another retiring soul. He didn’t so much interact with his audience as throw them sheepish, coy glances. Not that we minded, sometimes being shy on stage is fine; especially when you take into consideration this band’s canon. Lion Face Boy and We Built a Fire were verging on the elegiac, both tracks possess formidable hooks and a chugging, clockwork beat that makes them irresistible. Cold Summer was another moment of pure release with the strings bringing a poignancy that was nigh on unbearable for sensitive souls in the room. 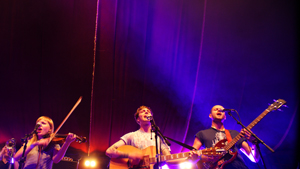 Damian: I’ll admit I was slightly inebriated by this point but I thought they were simply outstanding. I was swept up in their music, completely surrounded by it, and for the time they were onstage I completely forgot about everything else around me. I thought it was a really special show and one that I’ll remember for a long time.

Richard: It was a marvellous gig and the highlight of the Thursday night by far. After this Stornoway closed the evening’s entertainment with what we heard was a perfectly acceptable set, though we weren’t present to see it.

Damian: No, sadly I became embroiled in a fierce argument about the merits (or lack of) a certain band from Manchester with some shy, retiring German teenagers and you ended up stroking a photographer’s feet at one point. Needless to say, it was an interesting end to a delightful evening. 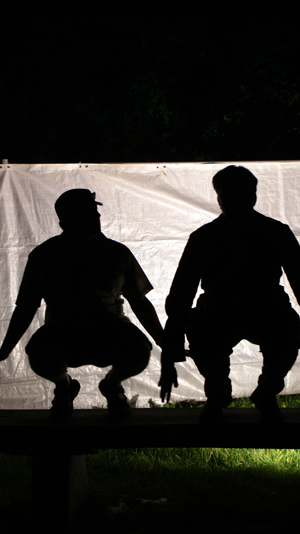 Richard and Damian were talking to themselves.

Catch up on Day Two here.

And Day Three’s review can be found here.

First I must confess…
END_OF_DOCUMENT_TOKEN_TO_BE_REPLACED