If you’ve listened to anything by Interpol, Editors or The Killers you’ll feel in familiar territory 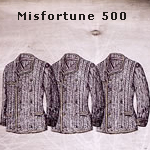 Athens, Georgia has had one of the best underground music scenes in America for some time now, although it has been a fair while since something as big as REM or The B52’s crawled out of it and into mainstream stardom. Misfortune 500 are the latest band to chance their arm at it and they’re certainly making a good go of it, it has to be said.

If you’ve listened to anything by Interpol, Editors or The Killers you’ll feel in familiar territory. Misfortune 500 also bring thoughts of early U2, Blondie and even the almighty Echo and the Bunnymen to mind.

Reading that back that seems a tad unfair, as to be honest this album deserves to stand on its own too feet. Yes, it sounds vaguely familiar, but that doesn’t mean it isn’t good. I actually like it quite a bit. The singer has a good range – with some really good screaming every now and then – and the music is pounding, thumping, energizing stuff. Yes, like all of these indie bands they sound like they’ve been wandering around with a black cloud over their heads for a few years, but they don’t half make a good racket. The guitars are sharp and angular, the vocals are raw and energetic and the tunes are well worth the effort for those of you that like to wear stripey t-shirts and dance without using your arms.

If you feel like you need to do a bit of shoegazing, you could do much, much worse than this. You could listen to Editors, for example, and we wouldn’t want you doing that now would we?