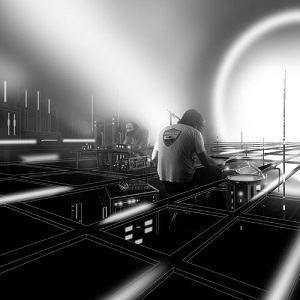 This record is a cracker. A cracker! Now I have always liked zZz without getting totally sucked in to their scene. Sometimes the duo flattered to deceive, and sometimes they seemed to be content to surf a wave of general acceptance. There was also this stagey, Amsterdam-thespian element that meant you could never get really close, or allow yourself to be guided by their music. For sure it was attractive and very dancey; but attractive at a remove, and easy to cast off after the initial gloss had been worn away. A shame because the duo can be great live, their mix of old dog crustiness and “I’m gonna put my head through the fucking door” Gonzo idiocy always has the potential to charm.

On this record they click and it’s revelatory. Somehow this release feels different; it’s guided by a more human, less theatrical star. The songs ‘give’; even when they pretend to be threatening and tough. Even when they do record the habits of some old gozer sitting in his chair scratching his balls and eating pizza like on When I Come Home (with all its cod-Morrisonisms) or the Perry-Como-as-drunk-slob act on My Girl. Somehow they’ve harnessed the camp side they had and made it less formidable, more easy to love. Dead End sounds scruffy, like Divine waltzing with John Maus, and Blood is a properly working class, sub-Klaus Dinger pop song, tough and wanting to be loved; with chord changes drenched in a great, “embrace the world” sentiment and wit. And (whilst I’m in the mood for appropriating the names of old crooner gits) My Girl could also be a C21st snack bar take on Iggy.

The last two tracks – both instrumentals – are absolutely brilliant; Red Beat is a sparkly, well-buffed oddity with a certain dogged staying power; imagine a dodgem car that has escaped its fairground moorings and trundled off into the sunset, or maybe some lost son of Telstar, full of Moggadon. The track could soundtrack some smashed up all night bingo razzle, on the Hoek to Harwich line. Finally, Juggernaut is incredibly reminiscent of the title track of T-Dream’s Atem, albeit speeded up. So it’s ace (that should be obvious given the T-Dream reference), and even has a hint of the grandiose mellotron wash of the original. It’s ridiculously long too; wich is also great. Great! In fact you could just listen to this mother, and get spun out. One other thing; Jan Schenk’s done a great job on this record. On the whole I don’t really click with the ‘pristine’ college pop sound he makes, but somehow the values Schenk brings to make other records poppy and acceptable to a mass market has harnessed what is best of zZz and given it focus and energy.

This is a record that keeps giving. Check it out.