" An Interview with Lou Barlow of Sebadoh

Sebadoh – Alive MMIII An interview with Lou Barlow from the Sebadoh Resurrection in Rotterdam, by stevenmc.

END_OF_DOCUMENT_TOKEN_TO_BE_REPLACED

Black Keys and the Dirty Ground An interview with The Black Keys by Jonathan Dekel.

END_OF_DOCUMENT_TOKEN_TO_BE_REPLACED

Journey to the Great Eastern – An Interview with Eastern Lane

A Domino Birthday – An Interview with Laurence Bell of Domino Records

END_OF_DOCUMENT_TOKEN_TO_BE_REPLACED

Nirvana first made me want to play guitar. Kurt Cobain I suppose.

END_OF_DOCUMENT_TOKEN_TO_BE_REPLACED

"The truth is in the Music. Who turned on the bright lights? – One man’s quest to find Interpol", by Jonathan Dekel.

END_OF_DOCUMENT_TOKEN_TO_BE_REPLACED

You know, I’m not that sure if I can be really excited about it because actually the songs are truly terrible.

END_OF_DOCUMENT_TOKEN_TO_BE_REPLACED

Our sound has just evolved really, but right from the first rehearsal, we kind of had it in the bag.

END_OF_DOCUMENT_TOKEN_TO_BE_REPLACED

You can’t force it. You never write a song thinking ‘this is going to be a great popsong’.

Taking a Stance – An Interview with The Stands 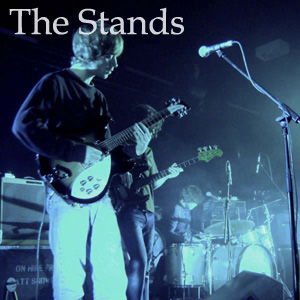 Liverpool and Manchester have always been breeding grounds for great music and at the moment, it looks like Liverpool is the place to be, what with the Coral, The Zutons, the re-emergence of the magnificent Shack and, the band with the current Noel Gallagher seal of approval, The Stands all producing great music. We caught up with Steve (drums) and Luke (guitar) backstage at the Paradiso during the London Calling showcase to find out what makes the Stands tick.

Incendiary(IN): Let’s start off shall we, how would you best describe The Stands as a band to some ignorant music hack like myself?

Steve: Ok. You’re all listening to The Stands in the shower in Amsterdam. The Stands consist of four males, we all play our own instruments.

Steve: And we all come from Liverpool.

Luke: The northwest of England.

Steve: We all come from the north, at the side of the ocean.

Luke: Two of us are from Merseyside, well, we’re all from Merseyside but two of us are from the Wirral, which is across the Mersey from Liverpool. So we’re all from around Liverpool. You know there’s the song (starts singing): ‘Ferry, across the Mersey, there’s the place I love, there I’ll stay…’ You must know that song. Anyway, we’re from there. (laughing)

IN: So that’s why you’re automatically described as influenced by the Beatles?

Steve: Definitely, because we love The Beatles. They’re our favourite band, I probably can speak for everyone on that. It’s a compliment definitely. It’s like, they’re our heroes.

Luke: At the same time, I can’t remember the last time we all sat down and listened to a Beatles album.

Steve: We’re supposedly all from Liverpool. That’s what the connection would be.

Steve: But our influences range from any sort of music as long as it is sort of intelligent, as long as there is a kind of…

Luke: as long as there is some thinking behind it. Or a good voice, or a good style, or anything that is good.

Steve: There’s a lot of bands…

Steve: Everybody buy a Shack album. They’re from Liverpool also, and they’re fucking amazing. We did a tour with them. They are… they are the ones. They are fucking brilliant.

Luke: John Coltrane and the rest.. erhm…. Come on!

Steve: I try to think of something good. I don’t know…

Steve: I’m finished, I haven’t really got one.That’s it?

Steve: There you go.

IN: You mentioned Nick Drake. Do you think you have the same melancholy aspect to your music as he did?

Luke: I think there’s definitely a melancholy in what we’re doing.

Luke: I suppose it’s quite reflective, the music. You get a lot of that in England, because of the weather. It’s always miserable, and… you see what I mean? It’s not like, say, a Finland where they all come out with this really really dark, depressive, really dark stuff. It’s just more kind of… it’s a little sadder, and always a hope that spring is just around the corner, and then eventually summer as well, so as well as winter there is a bit of spring and summer in the music that we make, I think.

Steve: Definitely. When the summer comes, I guess, is when we write more songs.

Luke: Yeah, it’s a bad spring now, so… come to one of the festival gigs and you’ll see more sunshine.

IN: How are you finding the tour? Are you just having a blast or are you feeling under pressure?

Luke: I think it is difficult for us at the moment, because we’re still growing as a band in our status. For us, everything we do is slightly bigger than the last thing we did. So, there’s more of an expectation on what we do than the last time. There is definite a pressure for us to keep our face and to really give to the audience an offer so they want to get back to us, and I suppose that until we reach a point where we’ve won everyone over, then touring is going to continue to be difficult.

Steve: But it feels good that it is difficult and I guess we all do. You miss it if it wasn’t difficult. The thing is, winning the audience over is where it’s all about. Definitely. If people come to the show, then the best thing is that we fucking change someone’s mind. That’s the big thrill of the shows I guess.

IN: You’ve had Eastern Lane touring with you, right? How was that?

Steve: Yeah, that was great.

Luke: I would say, what we play is totally different from what they do. So it was weird. I don’t think for the fans, because they came to see us. I think when Eastern Lane came on, it was a bit like a so-called shock, but…

Steve: I’ll tell you what. We just come away from our tour, our own tour in England and we were playing with a band called The Blueskins.

Steve: The Blueskins they are…

Luke: They are going to turn into a beautiful flower. They’re like a blues-garage band from Leeds, and they’re great, great musicians.

Steve: We have a good time. We’re in Amsterdam with The Zutons, we’re gonna be opening with The Coral as well. And together with The Zutons and The Coral we’ll do one show in Paris, like all after each other. Which is going to be cool, but still… not the Blueskins.

IN: In order not to be forgotten tomorrow, do you feel you have to balance aiming for commercial success with your own ideas and aspirations?

Luke: I don’t think… You can’t force it. You never write a song thinking ‘this is going to be a great popsong’.

Luke: I want the best. No, what I was going to say is, what’s good becomes commercial, so even if something appears to not be commercial, if it’s good, then people are going to come out and buy it anyway. I think like commercial music, or music that appears to be going commercially, or whatever, gets a really bad way, because it doesn’t make any fucking difference, because if you’re all pumped up with advertisements, or if a song is produced in such a way that it is going to fit on the radio, or if it is a shit song, or a shit band, then tomorrow it doesn’t make any difference. So, you just got to look for great quality, because the audience at the end of the day, no matter what economic system they’re under, are gonna come out and buy what they want to buy, or the music that’s good to them or means something to them. And like the whole system, however fucked up, and internal politics there is within the system, like.. that doesn’t matter, you just have got to play something that is valuable to you, and hope it’s valuable to someone else too.

Steve: What I was talking about before is like, we recorded these songs and that was a stand-out track as a single, and we played in rehearsal rooms, and all we heard was loads of fucking (makes some weird noises), bad noise, and we took it to the studio and were like, wow, that’s good, that song fucking stands out, we might bring that out on single. So it’s kind of like you have got your ideas, and they’re all floating around and you put it down somewhere, and you go, okay, now we can make a few decisions, and then it works.

Luke: I think there’s a certain proportion of the audience overwhelmed that can be influenced commercially. Do you know what I mean, like Radiohead, I don’t think they have a sound to be commercial, but they are commercially successful. It doesn’t matter what they say, or what they do, whatever they do, they still sell records in the same record shops that S Club 7 or whatever, sell records. They’re still part of the same system. It doesn’t make any fucking difference, if you know what I mean. I think what’s good… people buy what’s good and some people will be influenced by what they’re told to buy, but that’s the way the world… that’s what capitalism is, or whatever.

Steve: I was about to say: an alternative and nice fucking happy ending, where it all comes back to an old place again, like the sixties. There’s so much shadow, you know. There’s a different world now, and we’ll see what happens after such and such.

IN: Do you always strive for perfection when writing your songs?

IN: Isn’t it difficult to always strive for perfection? Do you feel you ever reach it?

Steve: No, I don’t think so. Well, if you ever figure that you’ve reached that position, then you’d have to back down on people.

Luke: No. That’s a definite no here. Because that’s what drives you to make something good in the first place: it’s that what you’ve done before is not good enough, so the second album will be better, the third album will be better. That’s why every band wants their next album to be better. There have been a lot of bands recently where their first album is really ‘wow!”, and every paper, ever critic is like ‘wow!’, like The Strokes, and with the second album you go like ‘ow, that’s rubbish’. So forget about that one, here’s the next thing, you know. Like, you strive to make a better album next time and the next time and the next time. Like all the best bands in the old days.

Steve: I don’t know where the quote is from, but quote on, quote on: No-one ever racked a statue for a critic. So, fuck critics, you know what I mean, just keep on doing what you’re doing, that’s all that matters.

IN: Ok, now is there one question you always wanted to answer to but you’ve never been asked?(silence).

IN: And finally, you’ve described the future of the Blueskins as a beautiful flower, how do you foresee our own future?

Luke: Yeah, yeah, we’re not a flower anymore, definitely not. More like a bear. Would you say a bear?

Steve: A flower with teeth.

IN: And how would you explain that to somebody?(They both start laughing.)

Luke: Come to the shows.

Steve: Try and see it your own way and if you see it the same way as we do, then I guess it makes sense.