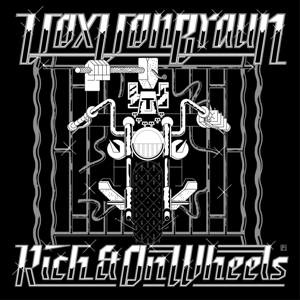 It’s nothing new, this LP. You’ve heard it all before, this kind of stoner guitar rock, high on reflective, warm-toned guitar washes and drunk off the effects pedals. You’ll probably put this on and think, yeah okay, it’s a beautiful sounding record, so what’s so great, and reach for an old Ultra Vivid Scene LP or some such… Yet there I was, on a social network site near you, loudly trumpeting that Rich and On Wheels is possibly the best LP to come out of the Dutch underground this year. And believe me there has been some stiff competition for that accolade in 2012, regardless of whether you think I talk piss 24/7. It’s a misnomer that NL has nothing to offer in terms of great underground bands, quite the reverse and this last 18 months has been of special vintage, especially if we’re talking about guitar-based acts. Space Siren, The Sugarettes, Boutros Bubba, Spilt Milk, Lost Bear, Luik, Kin, I Am Oak, Witte Veder, The Doo Run Run, Wooden Constructions and Mere have all graced this year with some outstanding releases, even Minny Pops are back in the hunt will a killer single.

So what’s so special about Vox’s new one? Well, for starters, I just can’t get the songs out of my head. The songs are incredibly simple and unaffected, almost naïve, in the manner that absolute classics often are. It all just sounds so easy, so obvious; you can easily think to yourself, why haven’t we heard this before… Thing is, many would baulk at writing a song like You Look Real Neat, or A.R.T.I.S.T.S. Are Go, as it’s so basic a concept, ridiculously to the point, maybe embarrassing to write something so optimistic and dreamy: lots of lesser lights would overcook these songs, add elements to make them sound important or deep, or strain to show how damned clever the band was in making something so simple. Not Vox. Wymer Vaastra means it when he knocks out the lines in A.R.T.I.S.T.S.… “Making up fantastic scenes / Way out of hand”… for him he’s singing the praises of his artist / artisan mates in the most open way he can. And this directness and clarity gives you a buzz; it makes you swell up with fellow feeling.

So, there’s honesty. All the songs are in some way autobiographical, describing feelings and situations, none of those dreaded, over emotive, niggling non-statements in lyrics that plague a lot of Dutch bands: (“running away”, “keep on falling”, “winning the war” I’m looking at you, here). When Wymer talks about the mess him & a friend have made of a certain situation in Dig a Hole, or the gentle piss taking in the title track, or the drug plans in Ibiza Style, or the bore he suffers in Jezebel, he means it; they are about things that have happened. And you recognise the honesty in the delivery and those stripped down, caustic rock and roll phrases he uses.

What else? Well, try beauty. Being Vox Von Braun, this record’s sound is another thing. It’s beautiful. It’s just so attractive and addictive as a listen. Some bits are heart melting: the refrain in A.R.T.I.S.T.S. Are Go is akin to that scene in Ice Cold in Alex, when the dusty escapees have their thirst slaked by a pint or two. And How To Be Your Love boasts a towering sound at times, the crystalline guitar arpeggios tumble languidly over each other like the caressing movement you see in a corn field when stirred by a warm breeze. You get the picture.

Depth, let’s not forget that. Some bits are dark; the last few tracks have a maudlin, grimy side to them that sort of fits the band’s reputation as night owls but as elsewhere Vox don’t go to shock or impress you, they just state what’s going on. That’s why the penultimate track Pitch Black Heart is so chilling, so overwhelming, especially when it trades its faux camp, sub Glitter beat for a slow tortuous burn out.

This record is everything and nothing. Just like the band. They’re just a bunch of people from Groningen. No more than that, and they’re not looking for your approval. What you do with Rich and On Wheels is of course down to you but I feel its quality allows me to keep playing it, not giving a shit what you think of it, or of this review for that matter. To me, it’s that good.