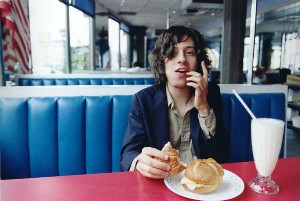 "I’ve carved a big crater for myself. Which I can die in! But if I can I may burrow all the way through and then I can get to China."

"I’ve carved a big crater for myself. Which I can die in! But if I can I may burrow all the way through and then I can get to China."

Incendiary are backstage at the Melkweg waiting for Adam Green to finish an interview. So far we’ve drunken a lot of his beers and eaten a fair amount of his cheese. But things are relaxed. Chatting to his band members, Incendiary pass the time and learn that the Christiania compound in Copenhagen has houses with Hobbiton-style round doors.

Eventually Mr Green arrives, somewhat flustered but as genial and happy to talk as ever.

IN: I noticed in my new passport (which I was checking the other day) a very nice phrase which includes the line, “without let or hindrance”. Should we the listening public allow you, Adam Green to perform without “let or hindrance?” Your muse is a very singular one. And I’ve often wondered whether you feel let or hindrance from the music world around you?

AG: Well my songs aren’t part of it at all. It’s always been a case of me being a lucky dog and always figuring out just how much I can do without losing my record deal and by the skin of my teeth getting to make another album. It always occurs to me after each one that I’ll never make another one again. You know, I now think that I’m half way to somewhere (laughs).

IN: You’ve carved a niche for yourself?

AG: I’ve carved a big crater for myself. Which I can die in! But if I can I may burrow all the way through and then I can get to China.

IN: There is some visual link with what you are trying to do especially with this last LP, Sixes and Sevens, where there’s the picture of a roulette wheel. I was struck with the thought that is this the way you both create and present your songs?

AG: I think there’s an aesthetic link only in the blind confidence that I’ve always gone into making songs with. I have never second guessed lyrically anything and also if anything… a friend said the other day that I obviously never got the memo about being modest in music!

IN: Do you want people to take you seriously though?

AG: I always thought people would any way. Even if I did it (laughs). You know I got into trouble for saying once that I took my music medium seriously. And I thought that was a very honest answer, because I am serious about the compositional element and I am serious about putting my music out there; but also it’s so pretentious to believe that what I say is gospel truth, or for other people to think that I believe my sub-conscious is gospel truth… But there is a deeply encoded symbolist aspect to my lyric writing.

IN: Regarding your lyrics, I am often struck by the similarities between you and Robyn Hitchcock, someone else who have been tarred with a brush… Don’t you feel that you work in a constricted medium in pop music?

AG: Right, right! I like Robyn Hitchcock! But I sometimes think this constriction is my own thing, it’s down to using formalism, I love the formalism I put on myself. Friends of Mine, Gemstones and A Jacket Full of Danger are a triptych of extremely restrictive, formalist records where there are 15 songs each, the songs are all about 2 minutes long, they are all recorded in the same fashion as we played them live, and I was the sort of fascist dictator in the studio, where every I controlled little sound made on the albums. I didn’t even allow anyone else to be singing on them or really contributing (to them) a whole lot.

The new record is, for me, almost a re-discovery of the ideas I had when I was home recording, treating the studio like it’s a four-track… You know these four girls sing on this, or my dad sings backing vocals on this, or I bring a pan-pipe flute player in or a pedal steel player in. Let people do what they want. It’s been really good and it’s something I picked up from sessions in Nashville where I was trying to help a friend of mine write some songs. I was watching these guys play and I realised that regardless of what you tell people to do they will eventually do their own thing and perhaps that’s better…

…I feel I still maintain the ultimate control at the mixing desk, I’d like to continue in that fashion, or maybe play more of the instruments. I mean I haven’t really played the guitar on record since Friends of Mine. On Jacket… I didn’t play anything. I might want to take things even further. I’m trying to stretch it. When you stretch it too much it could burst and that could be embarrassing for me…

IN: Why on earth do you say that? It’s funny that you pick up on that and yet, if you are to be judged by your output, you are perceived as such a wilful artist. Why should you care?

AG: Well because a good record should highlight my strengths rather than expose my faults, and going into territory where I have no business to be or show what I lack. Everyone tries to do what they do best and naturally, whether you are James Brown or Leonard Cohen. Obviously the more Leonard Cohen tries to do a James Brown thing the more its obvious that he can’t. And my own limitations are I guess somewhat obvious to me. I’ve always written songs with me in mind as a performer, and that’s the great thing about being a singer songwriter; you can custom tailor your songs. Take Roy Orbison, writing those beautiful songs for his beautiful vocal range, no-one else would even write those parts because no-one else could sing them.

IN: Of course. Funnily enough I thought something similar the other day, listening to Funkadelic, Free Your Mind and Your Ass Will Follow. I thought of you actually because I knew I was interviewing you. I was initially trying to find examples of absurd concepts that work beautifully on record. And thinking on what you’ve just said, no-one else but Clinton could have got away with that….

By the way my initial question (after listening to Clinton and thinking of you), was, do you think that American ideas on freedom and creation and eccentricity are different from European ideas?

AG: I don’t know, erm.. you what it is? It’s more like that all my music falls in the realm of being strange music. It’s like me and my personality rather than the sound or style. I guess in a way my “essence” is some extent an un-commercial essence. When I try to do something that should work commercially it just ends up sounding commercially unviable. It’s at odds with guys I know, like the Libertines guys or the Strokes guys whose work is so much more successful at a commercial level. It’s not my fault (laughs), it’s who I am! I identify with Iggy Pop for this reason. When you listen to his records, like Party, you know that he’s trying to have a hit and it just doesn’t work. That kind of dissuades me from ever trying to have a hit. It would be very silly and you would be able to tell. I want to ascend some sort of imaginary ladder of artistic record-making. I’d love to make records of the same calibre as a Bikini Kill record, or Beck’s Mutations.

IN: Rather than do something completely off the cuff?

AG: Yeah; I mean my lyrics are always off the cuff. Lyrics are always my excuse to sit back and relax. Music I’ve always really thought over methodically. Some songs are so difficult, such as the melody for Sticky Ricky, I mean the lyrics are silly but essentially with the melody, I spent two weeks every day on the bus with a little casio keyboard and headphones trying to write the incredibly complicated melody which became the orchestral part. I have a nihilist streak which thrives on like you now, working really hard on things and then fucking them over. I love it; it really makes me feel like a man to do that! That is what excites me, and what I find so funny. That’s what you were talking about earlier, in that the way I make records is different. I want people to listen to my records in that old tradition of people listening to the great records. The way that Woody Allen made his films, they were made in the tradition of making great cinema.

IN: So you are an entertainer working in the wrong medium, and in some ways Rock n Roll isn’t meant to be an entertaining medium.

IN: I always think Rock n Roll has elements of Christianity in that in some ways the artist suffers and expects his flock to too. And yet you’re not that, you’re more an entertainer, in that you want to lighten the mood. Your work harks back to people like the Rat Pack or ‘30s crooners who wanted to give people a relaxing, good time. To use a ‘60s phrase, you’re work is redolent of a life of leisure.

AG: That’s actually a line from a new song I just wrote! (Laughs) I wrote this song a few months ago with the line, “I fell into a life of leisure/ I saw into a path of pleasure”. It’s funny I guess in a way, it depends on what extent you want to recreate your surroundings. Do I also have to go and try to reinvent the scene surrounding say torch music? (Laughs) I’d book old theatres but I don’t know if anyone would come. This is where music happens. Here and now. I’m not delusional with this stuff…

AG: Right, right… I guess, oftentimes I have conflict between the way when I’m making records and performing. I feel that performing is a negotiation in that struggle. Sometimes I’ve used alcohol as a crutch to perform, or performed so seriously that people got really down. How could I sing Jessica Simpson without cracking a smile? And I guess that’s why I’d always say I was halfway to somewhere. In the next ten years it’ll be figured out.