This could be one of those gateway LP’s allowing the folkie ingénue into a veritable Narnia of treasured recordings. 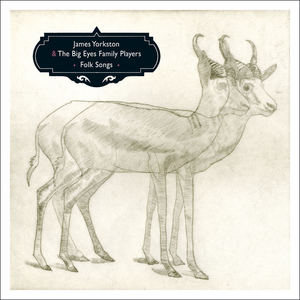 Yorkston is back, and Incendiary magazine rejoices.

There’s something very peaceful about listening to his measured, almost methodical drawl quietly lay down the folk law, and Folk Songs (despite it being an LP of classic covers) is in many respects no exception. The album is an interesting work however, in that the challenge of interpreting classic stuff like Little Musgrave, doing justice to the “folk pantheon” built by Christy Moore, or Anne Briggs, and calling in the Big Eyes Family Players to back him has led to an album of unexpected twists and turns.

Now and again James has been known to let loose, (some of the ever so slightly demented camp fire sing-alongs on When the Haar Rolls In, or his heroic attempts at recording Can’s Mother Sky come to mind), but the thumping Low Down in the Broom still has the listener putting down his whisky in mild consternation. And it’s interesting to hear how JY copes with a more conventional lyrical structure in tracks like Sovay or Thorneymoor Woods. Normally his lyrics are reflective, meandering and riverine. They lull the listener into a dreamy state, conjuring up imagery at unexpected moments. With these “in yer face” tales of love and loss, reflecting the nasty brutish and short lives of our ancestors, the approach has to be different.

And to be fair he pulls it off well. Little Musgrave is handled with a sensitivity that suits the song fine, (and believe me it’s the sort of song that, handled badly, could easily turn unlistenable), and Rufford Park Poachers is a brilliant interpretation, pedal steel an’ all.

This could be one of those gateway LP’s allowing the folkie ingénue into a veritable Narnia of treasured recordings.

Well worth your attention.