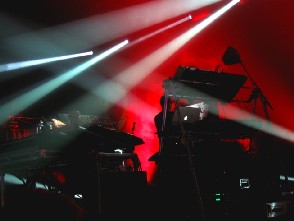 It helps, of course, that this band genuinely do have some of the greatest techno anthems ever in their arsenal; Chime still sounds as utterly unique as it did when it first emerged in 1989 (oh god, 1989?! join the club – ed)

Summer 1989. In Manchester, Cath Aubergine was a wild-eyed teenager with a massive pair of flares, Reni hat and a fondness for certain newly-fashionable stimulants (sorry Mum). Just across the Pennines, Mrs. Burke was giving birth to Tristan. Later that year, Orbital released their debut single, of which Cath is very proud of her original seven inch. Tristan was teething. Both were in the habit of uttering wordless nonsense late at night. Fast forward twenty years, and after a five-year break Orbital are back for one last trip round the block, and over two nights at Academy 1, two generations of Incendiary are there to see if they can still do the job…

CATH: Sometimes it does seem that every band who have ever had a Top 40 hit are currently reformed and dragging their bald heads around the Academy circuit. Often this is a last attempt to cash in on a career long past with little relevance to today’s music, to the point where some venues would probably do decent trade in basket meals. This is not like that. You can tell by the fact that the support is Delphic; you don’t take one of the country’s hottest young elecro bands out on the road with you if there’s any chance they might make you look a bit past it. No, Orbital’s final tour, after a few years off, is less a reunion trek and more a testimonial for one of the most influential bands in British electronic music. And besides, they were always bald.

TRISTAN: Not so long ago, I probably would have laughed. Orbital were those guys in weird light-up glasses, peddling 90s dance music on the TV coverage of Glastonbury. They’d quit a while back and I’d never really been interested anyway. Since then though, I’ve lost interest in the vast majority of guitar music, discovered many of my favourite bands mining beats and euphoric crescendos and found the joy of dancing till you sweat like Niagra Falls. Anyway who am I to turn down free tickets for a group that so many people rave (LOL!) about? Admittedly,  I was still a little sceptical. I erroneously believed dance music was past it; dated; not particularly relevant. How wrong I was.

CATH: Delphic have spent much of this year out on the road doing support sets: crossing genres and generations they’ve made a play for Doves’ and Little Boots’ crowds, but this has got to be their natural environment: a room full of Mancunians largely of an age for whom rock and rave, indie and techno, knew no boundaries. Yes, they remind everyone a bit of mid 80s Factory (the general line says New Order; I say Section 25), but only because it’s very rare for a band to use a guitar and a real drumkit and still play something that’s very much electro-based, with all the precision that entails. And without straying into funky baggyland or any similar dead ends. It’s only a short set in which to show their wares but they’re very canny in this matter too – there are a lot of people who’ll be in a venue at twenty past eight who weren’t there at eight, so pull something special out at the end. In their case, it’s the moment where the fractured, poignant This Momentary shifts from minor key to major and explodes into a euphoric Counterpoint – there couldn’t really be a better appetiser for the main event.

Returning from the bar it seems something alien has docked on the stage. If a good live electronic act’s rig generally looks like some sort of spacecraft, Orbital’s is definitely the Mothership, a roofless, wall-less laboratory the size of a small flat. It looms in silence; there are technician types up ladders frantically trying to fix one of the projectors as the other displays the testcard (yes, the real vintage TV testcard with the girl and the blackboard). Time’s getting on and it’s clearly not going to happen. Best to just get on with it then. The Hartnoll brothers make a relatively low-key entrance and launch into something that these days would be described as the ubercool genre of "minimal" although way back when they invented it it was just Orbital. Some of the crowd look uneasy; since The Chemical Brothers unveiled that ridiculous LED screen a couple of years back audiences have come to expect more from an Academy-sized electronic performance than just knob-twiddling. Thing is, considering all we have to actually watch for two hours are a couple of bald blokes with lights on their heads prodding at a massive rig, it’s actually one hell of a show.

TRISTAN: True, there was a striking amount of pilled up thirtysomethings (Strictly vodka mixers myself these days – Cath) excitable as a teenagers on prom night, but this was defiantly A Good Thing. The interaction between audience and musicians was paramount. Not in a “HOW YOU DOING MAAAAAANCESTER!!!” sorta way, more like a cosmic bond, an unspoken agreement between artist and audience that made the rhythms of Orbital’s sequencers and the ecstatic dancing become indistinguishable. Ominous drums gave way to sunrise blasts of synths and strange projections spoke of cosmic fantasies of space travel. Again and again there was a peaceful lull followed by a perfect lift, each one inexplicably more perfect than the last. They’re intelligent too, cannily mixing arch pop culture references (A cover of Delia Derbyshire’s astonishing Doctor Who theme as a closer, yes plz!) with expert musicianship which stacked up layer upon layer of interlocking melodies and drums. More importantly though, this music gets inside you, and sober as I was (honestly!), I found myself feeling as euphoric as the bug-eyed ravers around me.

CATH: It helps, of course, that this band genuinely do have some of the greatest techno anthems ever in their arsenal; Chime still sounds as utterly unique as it did when it first emerged in 1989 (oh god, 1989?! join the club – ed) and throughout the crowd ageing ex-ravers are transported back to their wild years. And when the opening sample of the duo’s best known hit Satan kicks in everyone’s throwing themselves around and cheering along like the last fifteen years never happened. Who needs flashy visuals anyway? The last stretch of the set sees them pull out their other great trick; the (mis)appropriation of anything that takes their fancy. Specifically samples of You Give Love a Bad Name by Bon Jovi and Heaven Is a Place on Earth by Belinda Carlisle (proving once and for all my then-teenage theory that they were in fact the same song), woven into a proper hands-in-the-air rave masterclass. Afterwards it doesn’t feel like they’ve been playing for almost two hours; you feel you could easily do it all again, as indeed they and a few of the crowd will be doing the following night. With or without projections.

TRISTAN: Orbital blew all my preconceptions out the water. This music remains relevant because it’s passionate in a way that a throwaway “anthemic” indie band could never be, it understands that music should send tingles down your spine and make you glad to be alive. Fuck genres, fuck preconceptions, fuck 90s nostalgia. Any band that can leave a mass of sweating, hugging, grinning bodies in its joyous wake simply cannot be bad.