…a packed Kleine Zaal, (full of people who had either found pictures of my sixth form class from 1986 and then swore unyielding fealty to the power of our collective dress sense back then, or borrowed Molly Ringwald’s cast offs en masse), testified to the sheer trendiness of the event. 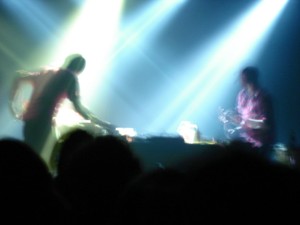 What a line up! It has to be said that this thought had obviously crossed the minds of many others in Amsterdam, and a packed Kleine Zaal, (full of people who had either found pictures of my sixth form class from 1986 and then swore unyielding fealty to the power of our collective dress sense back then, or borrowed Molly Ringwald’s cast offs en masse), testified to the sheer trendiness of the event.

First up was Picture Plane, a gangly gentleman with keyboards and effects. Ho hum, yet more clever-clever glitch-core we thought, but no, on further inspection this assessment proved to be wide of the mark. Picture Plane’s music revealed a very romantic soul, and a musical sensibility that nods towards intelligent, synth-based music from the eighties. There were times where the spirit of Gillian Gilbert floated around with abandon… Still, when has that ever been a bad thing? The music was widescreen, poppy, appealing and surprisingly fragile and the lad gave his all to get the crowd with him, going as far as confessing that he had bought a joint in one of Amsterdam’s coffee shops. Whatever next? 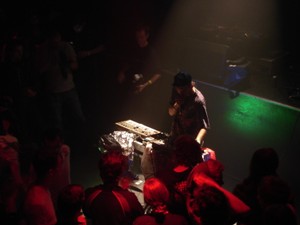 one man and his wires

A surprisingly brief interlude, then Health began their assault.  Nothing like the Haldern noise-fest (which seems on reflection to have been a massive “fuck off” to the festival’s organisers), rather a clinical demonstration of what makes them tick as a band. Coming to Health without much knowledge of their back catalogue, indeed, what they are supposed to be “all about” could be a bewildering but refreshing experience. This particular grizzled hack had his doubts about them, finding the debut and remix LPs patchy and a tad unfulfilled (for the uninitiated, they specialise in fractionalised, granulated pieces of atonal noise that somehow have an emotional presence). 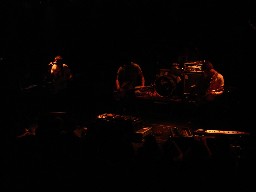 But still, if you are patient and allow them their muse, they do have a punch on more than one level, because (weird to say), underneath they are a pretty traditional band. They use the all-encompassing brilliance of their drummer. They know that you have to build up a show, allowing moments of release for the audience (they have a couple of cracking tunes that are used for this purpose in Die Slow and Crimewave). They overemphasize their stage personas in a way that Kiss and Led Zep did, as entertaining the crowd is high on their priority list. At times they do tread into cock-rock territory. And I wonder if their audience realised this, whilst they danced with giddy abandon of those knowing they were where the Grand Faerie of Trend had decided to set up His altar for the evening.

Following this euphoric assault the audience was pumped up, maybe a little too much, because when Fuck Buttons kicked off the gig with beautiful (and very danceable) new single Surf Solar, the place was on the verge of meltdown. Orb gig this was not, however, as Fuck Button’s music is of a more elegant and relaxed nature. The presentation and interplay of textures is the informant in a lot of what they do, and this approach can become very ethereal indeed. This was very noticeable on Colours Move where, (despite the drumming and Ben’s frequent signals to the mix desk to turn the sound up) the whole Atem-era Tangerine Dreaminess of it all washed over an audience still buzzing from Health. 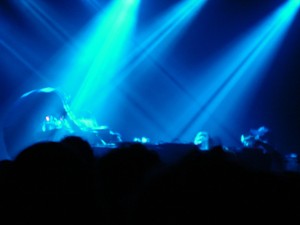 Once the crowd had found its level however, and once Fuck Buttons hit their stride with the magnificent Olympians, the Kleine Zaal shed its edginess and sank into the mid-tempo sensuality of the new LP Tarot Sport. This is motorik music with a heart and a substantial canvas. The approach to this kind of synthesized music has not really been done with any wit or panache since Harmonia all those years ago. Outside of the brilliant Thighpaulsandra I can’t think of anyone else in the same bracket. And (just like with Cluster), the sight of two men just (ahem) twiddling with wires, knobs and other electrical ephemera is quite a compelling one and one we’d entreat you to go and experience.

A top night, even if it was painfully trendy.