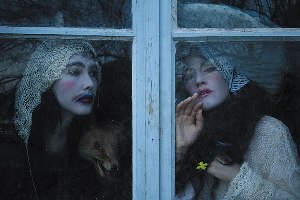 there were times during my “mini-trial” when I was left wondering if there really was an actual material, structural difference between CoCo Rosie’s world and ours

there were times during my “mini-trial” when I was left wondering if there really was an actual material, structural difference between CoCo Rosie’s world and ours

Never in all my time writing this magazine, have I encountered such a strange set of circumstances as that which greeted me before my interview with CoCo Rosie. Any interview with them seems to have a twist, and Incendiary always has a lot of fun with Bianca and Sierra, albeit in a slightly surreal way, but there were times during my “mini-trial” when I was left wondering if there really was an actual material, structural difference between CoCo Rosie’s world and ours.

To begin: I am summoned to an apartment complex near the Rembrandt Plein, one so anonymous that I walk past it twice before realizing. I then speak to an intercom that triggers two sets of automatic doors and instructs me to go to the lift. This I do. Once by the lift, another voice is “activated” and instructs me to press 5. I do so. The lift doesn’t respond. I decide that I’ll climb the stairs, only to find that the doors are firmly locked. As if in a show of anger at my all too human reaction, the automatic doors start to open and shut behind me. I may as well point out that my discomfiture is heightened as I suddenly realize the lager I have drunk earlier now wants to evacuate my body and will brook no delay. With a sense of increasing anger, I try the lift button again, and again, nothing happens. The automatic door behind me indulges in some more random opening and closing. I am near shedding tears of frustration. The voice once again instructs me to press 5. I do, and the lift opens, revealing two girls cross legged on the floor surrounded by a plethora of instruments. Both girls are wearing false beards.

Oh hi; you here to interview us?

Okay, we were just a bit busy with recording stuff.

I try to (jocosely) explain my mini-trial. It leaves the girls unmoved.

Once settled and refreshed in the apartment (a room filled with other journalists who betray no ill-effects from negotiating this building’s “oddities”)  I wait, nursing a beer until Bianca and Sierra re-emerge ready for interview.

I sit down to chat with Bianca: immediately she’s interested in my old microcassette recorder.

B: That a new one? Where can I get a new one like this though? They’re very hard to find.

IN: No this is an old one, but I believe you can still buy them. I like them better than the digital ones. I like them because they’re more solid. My last stand against the fractionalization of modern life.

B: But you’re a writer

IN: Just for the magazine. If I’m anything creative I’m an illustrator and a painter. This is my fun job.

B: But you’re a conversationalist. You have to be, all the writers I know seem to talk a lot.

IN: I’m a pub bore. But I do get uncomfortable talking about the thing I’m trained to do; painting.

B: Yeah, I think that’s true. I’m like that. I’m like… look and speak sometimes. What are you drinking?

IN: Palm. Admittedly you shouldn’t drink it out of a wine glass.

B: Belgian beer? I love its colour. I love rich colours, but Belgian beer makes me sleep.

IN: We could spend all day talking about the merits of beer. But I’d better ask you some questions about the album. I’ve only just heard it. I was struck immediately by the title. It was called the Grey Havens, and it’s really ghostly. Now is the Grey Havens a reference to Tolkien…

B: (After a long pause) it’s actually Grey Oceans but I now prefer Grey Havens. (Laughs)

IN: Is it? I make a wrong connection! I thought the Grey Havens title was a play on Tolkien & the album’s musical metaphor for leaving this world.

B: Tolkien wrote The Hobbit? I never read all of that stuff…

IN: The Grey Havens is the harbour where the Elves leave Middle Earth

B: Really? I really want to change the title now. I’m going to change it. And you’re not wrong on the connection in a way; there are a lot of ghosts on the LP. It’s not about recently dead people’s ghosts; it’s about much older ghosts. Spirits trapped on Earth, you know… ancient spirits. It’s not about new stuff; it’s about past life ghosts as we feel we’ve had a lot of past lives. Calling out to all the different ghosts that we’re walking around with you know? People like to fix themselves on one identity and decide that’s what their like, the identity they’re walking around with… We’re not really interested in harnessing ourselves with one identity or making the distinction with just normality and abnormality. But I think in our music it’s very clear that’s what we’re going for, especially as vocalists.

IN: I often feel that maybe we don’t really understand time at all and by governing our ideas on time in a linear manner is how we make time quantifiable. I suppose notions time and place can be displaced in ways we don’t really understand… Your record gives a strong feeling of displacement. Whether it’s the way that the beats are set up on some songs, whether it’s through vocal arrangements… it’s as if you’re trying to enforce the fact that there’s no real message in this record.

B: Right there really isn’t. There are a lot of imperfections too in mathematics… In a few of the songs, the beats aren’t traditionally gridded, they’re not synching perfectly with the rest of the instruments. And there’s like the song that has the more techno style… everything is at some point “off”. The little micro- offness is important. There’s another song similar called Fairy Paradise and you know we thought if fairies went to a fairy rave, that would be their style I think for techno music, because it wouldn’t be made with real machines. It’s organic techno. Only one or two of the songs ended up with that personality but it was an inspiration during the making of the record, that’s sure.

IN: The record also sounded to me like some really weird, show-tune opera, some operetta, maybe a cabaret element which you hadn’t really pushed before.

B: That’s fair. We also worked with one other musician on this record, a pianist and that kind of took it away from the insular work methods a little bit. Just by bringing this one other person it really opened the record up a lot. It really opened it up to different genres of music, so the musical references are more like outside of us… Our little musical world, you know; our traditional simplistic repeating chords and stuff…

IN: Do you find it interesting to work with someone else?

B: Well. I’d say no. But this is a special case and there are things I like and don’t like about it. I still often wish you know… it’s just the two of us doing stuff, we’re a lot less intimidated, but it was very luxurious to be in his presence and to play with him, and it allowed us to work more extravagantly and faster. Whatever we wanted to make or whatever we imagined, it was possible in the same moment.

B: Well… like we could bounce around and go really fast. I think a good example is the third song on the LP, Hopscotch, it’s really “rinky dink”. You can just you know, flip the channels so fast, from jazz, Arabic style, erm, something really soulful. And that’s what we already really like to do, but I think we normally do it in really suggestive ways, with more sound designs. Normally it isn’t done with musical arrangements so this is a difference to do it through instrumentation and arrangement. It’s not like we’ve made a major decision; “this is the way we want to work from now on” …

IN: I can’t imagine you ever having a “way of working from now on” anyway; it’s not your thing.

B: No, not at all…Because there’s no one thing that looks or sounds better than another really, there’s no measuring of better or worse. At least for us in the way we work.

IN: How do you find the idea of change? You have created a strong, identifiable persona through CoCo Rosie, and that persona is now franchised out to a lot of people and people expect you to “work” it… Can you still fit in your artistic impulses with working the CoCo Rosie persona?

B: What can I say? I’m pretty rested right now. We spent a few months not working together at all. I’m kind of obsessed with changing my identity in a major way. It’s not really necessary you know? I could just live somewhere rural and enjoy myself. But I do think that I’d like to start up a new career and be an artist. I just think I like that idea constantly… But there’s plenty of room within this project to change, I think, I think we’re still changing all the time. I like performing and the idea of changing my hair every night. Know what I mean? (Laughs).

IN: (Changing the subject radically)…This is a mad apartment. This whole place: just the effort of trying to get in. The lift wouldn’t come down.

IN: Displaced voices to tell you what to do. And this idea that we accept displaced voices and act on their instructions would have been considered the actions of a mad person one hundred years ago.

IN (Changing the subject radically)…I want to go back to this idea of cabaret. This cabaret feel seems to go hand in hand with the smoothness of the record. You used to be very spiky

B: Yeah we are. It’s pretty smooth; it’s much more tranquil I guess. Melancholic….

IN: You are both melancholic aren’t you?

B: I don’t think Sierra is. She’s kinda hyperactive… and silly, a bit aggressive. Half the time I’m the opposite, though I can be really angry too!

IN: What else do you do artistically?

B: Oooh I don’t know, a little bit of everything, working on a book of ten years of poetry, erm, I just had a little show in New York, in a gallery, with a bunch of other musicians, and it’s off to Milan soon. A show called Rupert’s Ropes, it’s got a bondage element to it. The main character is into self-bondage in a rural environment in that he tries it out in the stables of the farmhouse. There’s a lot of stuff he finds around that interests him.

IN: Stuff you find around.

B: That’s always how I’ve worked. I mean part of it is finding stuff around. Holland you don’t find the stuff around. It’s so modern.

IN: What are your personas on the new LP? The last was the Bloody Twins…

With that Bianca wanders over to Sierra who has entered the room, after finishing her interview and the two start to play with various small musical instruments, stopping only to turn on the telly-come-stereo-come gaming apparatus which plays Dolly Parton loudly. Both sing along with wild abandon.

Later we help CoCo Rosie pack their suitcases, which turned out to be quite a feat.