So, to sum up, a great record, beautifully presented with fabulous artwork from Savage Pencil. Just like old times.

So, to sum up, a great record, beautifully presented with fabulous artwork from Savage Pencil. Just like old times. 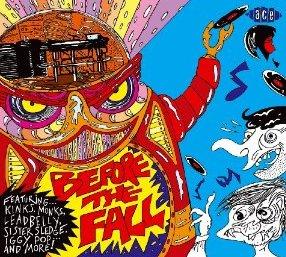 I’ve never subscribed to the theory that you can find out about a person’s psyche through their taste in music -outside of the madman who once tried to persuade me that his collection of over  5,000 copies of Michael Jackson’s Thriller LP was somehow worthy of more serious attention it than it had thus far received.  And my mind is not going to be changed on this matter by Before The Fall, despite it being a great compilation. As the record’s title suggests this is a compilation of 24 tracks that have been covered by Manchester’s (if not the world’s) finest band, The Fall.
We know and happily accept that The Fall can make Mozart sound like a plane crash, and the filter of the MES voice means most musical elements – however different, subtle or colourful must submit on bended knee before the sheer force of its character. This factor makes the compilation all the more interesting because of the diversity of the music contained. Even when The Fall covered a track pretty faithfully – or at least not too unintelligibly, (Mr Pharmacist, Victoria, Ghost in My House), the originals (in the quoted cases examples of garage, “English boogie” and Northern Soul) divulge a lot of musical surprises.
I must also say that this record is a spectacularly enjoyable listen; regardless of the connection with The Fall, and worthy of that hackneyed phrase, “hot shit”. If ever there was a compilation made for Fall fans to glower from the corner of a kitchen at a nice house party to, it’s this one. It’s an absolute trump card to play at a social gathering. No-one in their right mind could object to Sister Sledge or Wanda Jackson (though most upstanding people would object I’m sure to MES’s take on Sister Sledge’s Lost in Music), so you can be the social rebel and not piss off the decent couple who invited you to drinks.
Whatever the whole thing says to me about M.E. Smith’s mind is best left for the wee small hours.  As I’ve said, I don’t buy the “what your music says about you” argument, especially about Smith. I just want him to keep making new Fall LPs. And in any case the compiler of Before The Fall, Daniel Maier, does a much better job at ruminating about the Smith psyche in his excellent sleeve notes  than I ever could.
So, to sum up, a great record, beautifully presented with fabulous artwork from Savage Pencil. Just like old times.