So yes, there are some fairly arch tracks here, but all is simpatico at some level: and there’s some funny stuff despite radically different approaches.

So yes, there are some fairly arch tracks here, but all is simpatico at some level: and there’s some funny stuff despite radically different approaches. 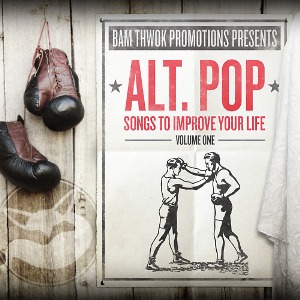 A compilation LP…  and not only that, but a compilation LP that deals in pure pop. No radical remixes or weird-outs, nor a haven for the socially unacceptable this collection; rather Alt.Pop is a throwback to an idea that seems dated or completely out of fashion. This is a record promoting various artists who set out to entertain and please. Rather touchingly the by-line is “Songs to improve your life”. What optimism!

The LP doesn’t wholly entertain me I have to say, there are times where I find the music veering towards the fresh faced… there’s a strident insistence on having good clean fun: a bit like being jostled into a line for the swimming pool by some white toothed and freshly – talc’d holiday camp attendant. But when this record is good, it’s really good.  There are enough shifts and elasticity to keep you interested; in fact it’s a record that gets stronger as it goes along.

So yes, there are some fairly arch tracks here, but all is simpatico at some level: and there’s some funny stuff despite radically different approaches. I could mention lots of other tracks from the record to illustrate this point but I’ll take four for now. Mat Motte and Elia and the Low Tears, for all their love of the odd sardonic quip and a mutual predilection towards a form of cabaret, knock out iron-clad pop songs, tough and self-assured and able to draw the listener into sharing the joke. Same goes for The Melting Ice Caps’ Strike in the Dark, which is a soliloquy that ostensibly could come from a musical, but somehow it works as a quiet bar room lament. And with A Table for One, Morton Valence still manage to come on like London’s answer to Gainsbourg without breaking sweat.

Elsewhere the music can get more impressionistic: Rats on Rafts produce their usual moody, distant groove with Landscape: here the similarities to an early Stone Roses are really marked. Plant Duw’s tumbling, runaway Astronot is pretty bonkers stuff, at times sounding like its being played at two different speeds at once. Star Fighter Pilot’s In Your Get Up is a groovy slice of keyboard tub thumping and The Six’s ever-developing instrumental Reprise is a marvellously moody ending.

There’s a lot more on here, and it’s certainly worth your time.