Bombino is in my humble opinion, best seen live, with no strings attached. In some ways he’s one of the few musicians where a sense of possession or “proprietorship” or “understanding” shouldn’t really bother anyone in an attempt to enjoy the music.

Bombino is in my humble opinion, best seen live, with no strings attached. In some ways he’s one of the few musicians where a sense of possession or “proprietorship” or “understanding” shouldn’t really bother anyone in an attempt to enjoy the music. 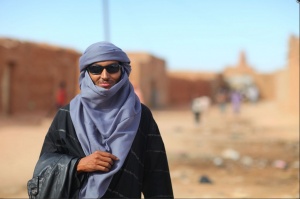 I’ve had to think about this review a bit; which is weird, because in some ways I didn’t really need to think too hard in terms of just writing a review. But we’ll sort of come to that in a minute. Maybe we should get one thing straight from the off, before you start wondering just what kind of nonsensical reviewer conceit I’m about to play out; that is, Bombino was brilliant at the Patronaat, and the gig was nothing short of triumphal.

I could go on, in this positive vein. In fact I may, just for a little while longer.

Why? Because there are so many good things to report; for one it’s so refreshing to see these sorts of crowds at gigs, in fact this was the perfect crowd; comprised of all ages, all appreciative, all interacting and not trying to pull off any cultural one-upmanship upon each other. And no scenester twits yapping through the gig! It’s great to see an informed crowd; and the genuine excitement that Bombino’s music was generating, it really was.

The Patronaat’s a great venue too. I’ve got used to the new place now, as I  have to say I used to love the old temporary space near the prison that was open round 2004-6 or so, I really loved it, but the new building has won Incendiary over; it’s got a warmth and conviviality that other “show pony” cultural buildings don’t have. Simply put, you can hang out there. Nice people, too. Even the deejay’s best attempts on the night, (Sultans of Swing? Pffshaw, Sirrah! Begone!), couldn’t dislodge us.

As for the gig, well as I said, that was breath-taking. Absolutely brilliant. I’ve seen the lad three times now; I own none of his records, rarely listen to him online and don’t, to be honest, really mind that I don’t.  Bombino is in my humble opinion, best seen live, with no strings attached. In some ways he’s one of the few musicians where a sense of possession or “proprietorship” or “understanding” shouldn’t really bother anyone in an attempt to enjoy the music. You can enjoy it, no hang ups, and that is in my experience, a pretty rare thing.  The set on the night was split into two; first up we had Bombino’s quieter tracks. With the band sat on these schoolroom chairs, we were led through a quick aperitif of mellifluous laments, ballads, wedding songs, a sort of taproom session on the run; a set, moreover which was just such a fresh, invigorating and virtuoso thing that I would have been happy for them to stop right then. I wonder where you could just plonk the lad and his band down, in a room and let him play, it would be revelatory stuff. After this (and a quick break) we got the amplified bit. Now standing, the band thumped*out a superb, rhythmical, hypnotic set. The whole thing was brilliantly paced, the groove never let up, and his “hits” such Amidnine, and new tracks which I’ve heard elsewhere such as IImuhar were just fabulous. It was truly something else. His vituosity on guitar was made manifest over and over; (he really is someone to watch, the way he plays, and the way he interracts with the bass player especially). And the crowd grooved. The band dug it in spades and we got an encore. As was only fitting.

So the influence and patronage of Dan Auerbach is clear; as well as having influential backing and a sort of wellspring of acceptance by people who would not previously have heard of this brilliant musician, Bombino has an act to show off; he has a clear artistic agenda and a way to perform. I’m not for one minute saying he doesn’t mean it, or that this modus operandi is bad; of course he does, and of course it’s not; it’s obvious this is the real deal, but the way the set is constructed allows his brilliance to be magnified and encapsulated in a very Western setting, that of the “club gig.”

And that is maybe what had me thinking longer than I should have about the whole thing. I was uneasy about the intro tape. I know he’s had a hard ride in his life, and I know he’s Tuareg, but if we need explanations as to who he is, as a sort of tacit conduit to enjoyment, (and we can point to the stage clothes too here), then what does it really say about our relationship with his music? Are these the sort of props that we need? The sort of safety blanket that also provides authenticity? Isn’t this almost a case of new wine in old bottles? I’d be far happier seeing the lad in jeans. Just a thought. It didn’t wreck my night though. Go & see him live, he’s a must-see.

* (What I mean by thumped is that they just did not let up, it was almost machine like…)