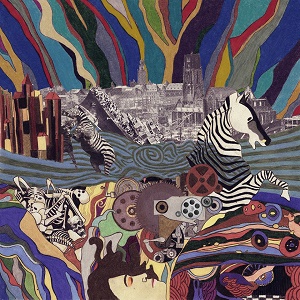 Rats on Rafts are not trying to make friends, instead they’ve done the thing you always WANT a band to do and that’s do their own thing.

Rats on Rafts are not trying to make friends, instead they’ve done the thing you always WANT a band to do and that’s do their own thing.

Come in. Sit down, have a cup of tea. Help yourself to a biscuit, there are some bourbon creams in the cupboard. Make yourself comfortable whilst I stick the new Rats on Rafts LP on.

If you want to feel comfortable, then you certainly have plenty of choice elsewhere. The one thing that the decline of music sales and the current plight of poor musicians everywhere seems to have resulted in is a spate of bands all trying their very utmost to please you as an audience. I understand it. Surely, if you make people happy then they’ll be more than likely to thank you for it and possibly cough up a bit of cash, don’t you think? Musicians have to make a living after all. That’s why they’re all out there being so nice. Almost everything you hear nowadays is just so POLITE. Well, not here it isn’t. It’s worth repeating before we go any further with this review that if you want to feel comfortable, then you have plenty of choice elsewhere. Tape Hiss is a record that absolutely does NOT have your best interests at heart. If you’re willing to buy a ticket for this journey, then you’d better hold on tight and I’d seriously consider things before entering if you suffer from heart defects or are currently emotionally unstable.

Things start off in a place many Rats on Rafts followers will recognize. Sleep Little Child has steadily grown into a live favourite over the past year or so and as the opening track it acts as a solid foundation for this record to build upon as it’s instantly familiar and yet……not. David’s vocals are submerged – to the point that for a while they actually sound like they could have been recorded underwater and the overall production is cavernous. You’ll feel as if you’re standing in a subway tunnel and there’s a train screeching towards you, its brakes wailing in anguish as it tries to slow down. The song sounds gargantuan. Florian’s throbbing bassline is up close and personal, acting like a handrail for you to get a grip of and steady yourself with but the guitars and drums fly around you in all directions. It’s a classic Rats on Rafts song, epitomising the brilliant interplay and perfect balance that exists among them when they’re on form. You may feel welcome here by this point, excited even, but then the gloves come off and you’ve got to be prepared to defend yourself.

Composition could be passed off as a bit of noisy filler but it serves a very clear purpose and that’s to unsettle you. There’s some lunatic shouting at you in the background for starters and for the first thirty seconds or so you’ll be reminded of only the very worst hangovers you’ve ever lived through. Those ones where you can’t quite find your feet, you can’t stop the world from spinning and you can’t distinguish one sound from another due to the incessant noise that seems to live INSIDE your head. You come round slightly (after about 40 seconds or so) and just start to pull yourself together before your stomach churns and you feel like last night’s kebab is about to make a reappearance. Composition is certainly not one for the masses and it charges straight into old single Powder Monkey, which continues the relentless drumming and surrounds it with an aggressive garage punk tune. You almost need a pair of steel toe capped boots to dance to it. Very suddenly, those fans hoping for a bit of Franz Ferdinand style indie pop rock will find themselves feeling quite scared and unnerved.

This is not the listening experience you were looking for.

Rat Poison Face brings more metal machine music to the plate. It’s a chaotic mix of white noise, screeching guitars and heavily distorted, reverb laden vocals. You probably won’t understand it to begin with but you’ll get the impression that there’s something fierce going on in there somewhere. There’s an undeniable energy to it and a clear, determined focus to it all. The song is essentially racing into hell at a hundred miles an hour with a smile on its face. If you’re emotionally unstable, I imagine this track could cause severe palpitations and induce panic attacks. If you were to find yourself listening to this late at night on a subway platform then I could well imagine you either sprinting up escalators in search of higher ground and safety or just caving in and diving onto the tracks to just end it all. Either way, if you’re not ready for it, this could well scare the shite out of you. I suggest you just take a deep breath and grab hold of something to steady yourself.

Seaside Tape Hiss gives you a moment or two to catch your breath before it melts into Zebradelic, a song that drowns itself initially in a murky, psychedelic swirl which, while not quite a bad trip is certainly a heady one. Precisely at the moment where you’ll probably be wondering if somebody spiked that last drink of yours, the whole thing explodes quite unexpectedly and we’re back hurtling at a couple of hundred miles an hour again, although this time Florian’s bass is scuzzy and distorted as well and that once safe handhold he gave you is gone. You’ll feel out of control, trapped in the vortex the band have created and there’s little you can do to escape. This will be extraordinary live.

By this point, your nerves are shattered, your heart is pumping at a rate of knots and you’re seriously questioning your sanity and then along comes The Last Day On Earth which is simply incredible. If you’ve trusted the band thus far, then here’s your recompense. If this is to be the last day on Earth, then it’s a gruesome, grisly, action packed, heart-pumping, exhilarating and totally exhausting one. If it were a film it would be classified as action horror. The track barrels along but this time you can feel the band are in total control. Sure, the whole thing threatens to explode at any point, that’s where the thrill comes in, but these guys know what they’re doing. Where’s the destination? Who gives a fuck? Enjoy the ride. The Last Day On Earth is Rats on Rafts at their purest and it is sensational. 1-6-8 (Machine) is thankfully more of the same. It’s a collosal, exhilirating closing number that’s so impassioned, so fierce and ALIVE you may well be a giddy mess by the time this is over.

In a world overrun with focus groups and targeted marketing programs, Tape Hiss sounds like something imported from another dimension. A difficult second album? Undoubtedly; but not for the reasons normally talked about. This record is harsh, aggressive and totally uncompromising. You can’t come to this record as a listener feeling half-hearted. Rats on Rafts are not trying to make friends, instead they’ve done the thing you always WANT a band to do and that’s do their own thing.

No matter what. You, as a listener, need to step up and meet them on their own terms. They’re not pandering to you in any way, shape or form and the results are extraordinary. Tape Hiss is, by some distance, the most impassioned, powerful and exciting rock record of the year so far and I can’t see it being beaten. It’s not just a good record, it’s an essential one.