Wymer from Vox Von Braun (also happily present in the room), whispers to me that “Frank’s got his guitar”. This is akin to Mercury passing on the orders of Zeus, and we are duly excited.

Wymer from Vox Von Braun (also happily present in the room), whispers to me that “Frank’s got his guitar”. This is akin to Mercury passing on the orders of Zeus, and we are duly excited. 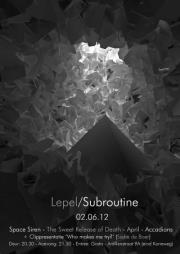 Groningen is a great place, possibly one of our favourites in NL, and we’ve been itching to get up to one of the mighty Lepel concerts for some time. Lepel is a tremendous operation run by the lads from one of Holland’s greatest acts, Wolvon; basically they guarantee you a night of fun and cheap drinks and cutting edge music, not dissimilar to Leiden’s own beloved SUB071. This time a chance to see lots of our favourite current acts under one roof was too much of a pull, so off we set on the arse cramp inducing train journey across Holland to what some locals now call Brommigen …

After a restorative pint in O’Ceallaigh’s we got the bus to Lepel. The venue is a converted office / warehouse space in one of those faceless industrial units you see everywhere in the western world. The Wolvon chaps have made a room with a homely log cabin feel in the space, replete with facilities for playing records, a makeshift bar and a corner (the log cabin bit) for bands to play. It’s pretty much all you want.

First up was Sweet Release of Death, a threepiece who trade in the kind of riffage currently being exploited by bands like Broken Water. You can easily get by in a review by dismissing acts similar to these in terms such as; “they sound like Sonic Youth or a ‘lo fi’ Dinosaur Junior”, but to be honest that’s a trip reserved only for wankers. The girl on bass has a good presence about her, and they have a certain dynamism; they are very good at all the structural stuff (when to release a change of octave or accelerate or basically make more squealing noise). So all in all they are pretty powerful. If only their tracks would veer out of the mid-range in terms of sound, or they would look at maybe exploring something more brittle or less full and rounded. But hey, it was an enjoyable enough set.

Then it was time for April who this magazine has taken quite a shine to this spring. The one thing April have more than most is presence, before they even play a note there’s something about them: they have this weird mix of Young Americans Bowie and Babes in Toyland going down which is great. You also get the feeling it’s bedroom dreaming and experimentation that’s got them their look, not some mindless copy pasting from what their peers do. No their vibe is singular, removed. Now, being young and “handsome” and prepared to glam up a bit doesn’t harm anything but you have to back it up and this is where they have blossomed. On this night’s evidence, they have come on leaps and bounds in their stage craft, their songs don’t sound so gauche anymore, they sound tough, lived in. Having a drummer has improved April beyond belief and now they command respect, with their more strident numbers like The Marching Song reassembled into groovier, more sinuous models. Their slower, more soulful tracks are now less delicate and more confident, they sound more Gothicke, more tragic, and if they can balance that against their soulful elements they could be onto something. All in all they kick up a glorious racket and it looks like they’re about to step over from being a musical project to being a band.

A dance, a merry jig, a laugh, (Groningen has the nicest inhabitants) and then we have something Incendiary has been waiting on for quite a while, Accadians. Wymer from Vox Von Braun (also happily present in the room), whispers to me that “Frank’s got his guitar”. This is akin to Mercury passing on the orders of Zeus, and we are duly excited. Accadians play a blistering head music that is lost on 99% of their countrymen, normally because it’s so rare to actually see the band in action outside of this northern town. I think I’ve frothed about it before, but in my humble estimation they are in spirit and outlook what Radiohead should have been. Not a band tortured by the myriad of intellectual and deconstructivist possibilities but an out and out space-head punk band. Accadians build the best sonic spaceships in Holland and use only the best metals. They are so adept at creating and transmitting huge sweeps of music and then knocking them down in an instant (usually by their own inbuilt sense of impishness). And Frank’s little boy lost act is also central to everything, he radiates a sort of innocence you can’t fake which makes the audience in turn ready to buy any kind of conceit: he means it, man. Accadians – receiving and transmitting, how rare is that? And of course you will probably never hear them live so what is the use of all this hyperbole?

Following that we take a deep breath and go to the toilet round the other side of the unit only to find our way blocked by a lampshade that bears an uncanny resemblance to one of the ghost monsters from the film Spirited Away. We take this threat extremely seriously (this is Groningen, don’t fuck with the vibes) and decide to tell everyone we can about the psychic challenge posed in the act of ingress and egress to the toilet area. We tell everyone, right now.

After all this spiritual diffusion we find that Space Siren ready to play. Space Siren is possibly the greatest guitar band in Holland as we write, and that is in the face of some heavy competition. They shade it at the moment due to the way their live sound just seems to be building into something momentous, something that people can really buy into. First we get Siebe de Boer’s incredible video of Who Makes Me Try?,  (the gig is in honour of the launch) and then Space Siren crank out their noise. You know on reflection the name Space Siren fits the band’s music exactly, exactly. It’s a tough name to live up to, for sure, but ever since they’ve thrown off the shackles of trying to sound like a band and decided to sound like what’s in their heads they are unstoppable. The sound suits them too; we are no longer in the cabin bar, no longer bungalow ranch styling it, but in the cavernous main area of the industrial unit. As such Space Siren’s guitars crash rebound and sparkle along the venue’s roof and Gwen’s voice is revealed as a clear, beautiful presence, a point of balance amongst all the metallic shards and rhythmic clatter. The bass reveals itself this evening to be a crawling, rumbling beast, adding power and strength at the points where the guitars have shot their load, goading them on for one final effort. And the pounding, restless rhythms are just monstrous with all this reverb; it’s a huge sound, the sound of a runaway machine.

Their take on DAF’s Verschwende Deine Jugend is beautiful, a sort of shimmer that slides amongst the audience, taking Gaby’s old stentorian commands and making them into a sort of waltz, it’s truly extraordinary. After that we need to let off steam: records are played at the bar and Incendiary loudly and inexplicably champions Todd Rundgren to young people. Votive offerings are left at the foot of the ghost lampshade. We get a French girlpop version of The Laughing Gnome and then decide to get home just before dawn’s rosy fingers break on through. Top do!