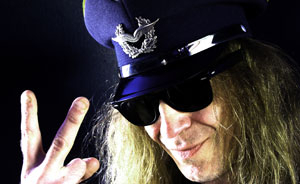 Incendiary go on a stroll with Julian Cope – Part 2

IN: Although you still have to interact with the mainstream, even in your personal life. How do you compromise?

JC: There are certain covenants that you make with the state that you can’t get out of. You have to send your kids to be educated; you have to allow them to go out into the everyday world at a certain point. You can be very hippy about it and just go “awh, home education maaan, I can’t have my children being in with chavs” – fuck off! You’ve got to interface with the outside world in order to know what’s bad about it! Much of the outside world’s good. That’s why I’m really into the Book of the Ancient Law it’s to explain that in order to understand what the law is you’ve got to understand what the edges of the law are. It asks a question: “why must nobody be above the law?” and it explains it on a physical dimension as well as an emotional dimension. From the early days the law man was not above the law but when he spoke the law he stood on a barrow and that validated his law because it was filled with the bones of his ancestors.

Part of what I’m doing is about sustaining. It’s only by sustaining that people start to build up an understanding of what I’m saying. If I’d only made five albums over twenty years you wouldn’t have enough evidence to really know what I meant. But by the end of my career you’ll have all these books, all these records and there’ll be enough evidence for you to decide what I actually mean. That’s the only way to be true.

IN: Were your views fully-formed early on?

JC: They’re different now from what they were this morning. They’re constantly changing. We’re always in a state of becoming. One of the things that makes me most happy is that I’m informed by the people around me.

IN: Is the growth of religion a real threat?

JC: It’s an absolute disaster but it can be managed. What I’m worried about is that with the rise in patriarchy it’s surprising how you can’t anticipate how people will respond. A guy that I know quite well recently said something that had never even occurred to me: “I’m really jealous of the Muslims, they get to have all those wives.” I’d never considered that people would think “they can, so why can’t we” and I don’t want stupid people to be thinking like that. My Grandma was 28 when women got the vote; it’s very recent. What we’re aiming for in the west is often disastrously unsuccessful but we aim higher for certain things. We aim for men to be able to lie with other men and women to be able to lie with other women. Some religious leader should not be in a position to declare that’s really uncool and they’re all going to die now. It’s not so much the religions themselves as the effect of butting up to other religions or secular people. I think enlightened secular Hinduism would be very useful: loads of gods, all shagging and facilitating people’s more extreme urges rather than trying to control them.

Julian wanders around a bit, jumping about and discussing whether they could get a shot in the barrow.

IN: So just let religion naturally fizzle out.

IN: How do you square these warnings over the dangers of Islam with your conventional Western liberal views on social inclusion?

JC: Because Mohammed was by far the greatest prophet it’s often forget that he was also a very typical prophet. Most prophets are totally at odds with Jesus Christ who I would term a ‘proto-Buddhist’; the Jews rejected him because he was so useless as a prophet for anyone who needed to defend their homeland. Mohammed was a good prophet because he spoke purely to his own people so it’s very important that we got in context just how Islam would be if, say, Sharia law came into Britain. Because that’s the way the Saxons took over Britain. The Saxons took over the British tribes. It was insidious. Invited over at first, decent, living a farming existence, very pragmatic. But at the same time they marginalised the British to the point where the Cornish stopped being known as the ‘Cornu‘ and started being known only by the way that the Saxons referred to them which was the ‘Cornwallis‘, or the foreigners of Cornu. So then the Saxons started to refer to the British tribes not as the ’Britonnic’ but as the ‘wallis’ or ‘welsh’ which meant ‘the foreigners‘.

IN: You understand how these comments could be portrayed?

JC: Completely! I have to have faith that there’s no evidence in my career of me ever being racist but I’m damn sure I’m greedist.

IN: Your only defence is that you’re anti-everything…

JC: Exactly. One of the reasons I look like this is because everyone’s going to think I’m a cunt so I might as well look like a cunt. I think it’s really important to set your stall out. What I’m writing about and declaring is really controversial but it’s like what Hunter S. Thompson said – “the only ones who know where the edge is those who’ve gone over it”. That’s why I have to be having a dialogue about everything. Imagine trying to turn on your average person who doesn’t really think about anything in any case.

The average people around the Houses of Parliament don’t know what to think. The gruesome parade of real rockers and placard wavers, followed by a sizable camera crew are crawling around the statue of Emily Pankhurst and singing songs of worship to the women. What happened to these hard-nut rockers, all ponytails and leathers? Did someone neuter the fuckers, extracting their macho willy-waving tendency? Why are they paying their respects to the suffragettes, placing themselves subservient to women rather than threatening to ravish our daughters?

A Russian man asks if this is normal around here as three Orthodox Jews take an unhealthy interest in the anti-Islam slogans on the placards. A researcher from the House of Lords squeals “ooh, I used to love Julian Cope” and fails to spot that her favourite hit has been rewritten to describe how “Emily flew in the face of fashion”. The crowd look on, jealous that they don’t have the balls to do this.

Across the road. The police don’t care, having correctly ascertained that even the most freaked-out, pilled-up terrorist ain’t gonna dress like our man Cope. Past the crews doing the Sky News lunchtime update. Past a mildly distracted Nick Robinson and the grim tent of Brian Laws. Over to Churchill’s hulking statue where the tourists crowd and get bored. Out here in the open they’re here to get a snap of Big Ben and nothing else. Mind-blowing cosmic rants about Churchill’s ancestry and why he was such a “right on motherfucker” aren’t up their street. A minute’s silence is held in the noisiest square in London and we‘re off.

IN: Why the need to live on the edge in the first place?

IN: Where does that come from?

JC: An obligation as a shamen standing on the edge of whatever is current.

IN: But you actively chose to drop out of the mainstream early, what caused you to do that?

JC: The same obligation to the covenant I made with my ancestors. My ancestors were all weirdos. I came from a family of Trotskyite miners so for me it’s hard to imagine that communism genuinely failed. I look at all the information and the evidence and I know that it did but it’s still hard for me to believe it because I’m such a utopian. My Grandpa would say “as I got older I noticed that most men don’t know anything or believe anything but I have to believe that men are ultimately good”. I used to think “include women in that and I’m with you”.

IN: Why didn’t you run with the popstar thing?

JC: Because I was surrounded by cunts.

IN: You could have used it as a chance to change things.

JC: No. I never had any evidence that I could change things from within. The only way was to be outside. I tried doing it from within and I had to interface with cunts. Believe me, it makes me sad. I’m only interested in being the frontiersman because I don’t think that I have a wider word. I’m not here to talk to thousands of people; I’m here to talk to hundreds. The whole point of what I’m saying is that “it’s got to be clear“. I always say that if the prophets’ revelations were the truth then they’d be clear; my revelation has got to be clear and succinct to the right amount of people. I don’t want people to have a Woodstock movement. It’s easy to think you can change the world when you’re a band at Live Aid and there’s a million other people. What you really need to do is be able to sustain something down the years. All the great heroes that I’ve ever loved…if they didn’t die they learnt to sustain something.

IN: How close are you to hitting what you want to sustain?

JC: Ten years off. That’ll do me. I’ve already had a life that is so blessed and lucky that I would say that my obligation is even stronger. Another ten years and it’ll start to make sense.

IN: Is the ‘outsider’ something you just are?

JC: If the world was different I wouldn’t be an outsider. But because of the way the world is I’m probably more outside than I was ten years ago.

IN: Do you want us to follow you out there or leave you on the edge?

IN: It’s harder to be an outsider nowadays, there’s a sub-sect for everyone.

JC: It’s easier to be shocking now than ever before. People are really quite easily shocked now.

IN: History tells my generation that punk rebooted culture. That’s not going to happen again.

JC: I think it will. It’s just that whenever something has such a revolutionary truth about it then you could be only a day away from it and still not anticipate it. What was most important about punk for me was that I suddenly saw people wearing Stalin badges and Swastikas and I didn’t get it. In that mystery was formed the greatness of punk.

IN: Can you still control your image when there’s unlimited information about all of us online?

IN: Why did you not want photographs taking today?

JC: Because I’m getting old. When you get old and you’ve got an image that quite cartoony you want to make sure that you’re the most a cartoon could be.

To return to Part One click here, Part Three, where JC tells us our responsibilities, is here. Parts Four and Five are here.