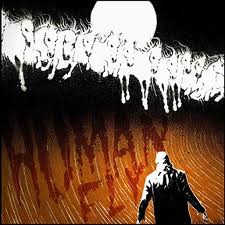 This is a great LP, a glowering, glistening mesh of riffs and incantations and enough nods to prog added to interest this Hawkwind fan. It has an unabashed teenage side to proceedings too. Opener title, This is Where Your Parents Fucked, has just the right mix of snickering fatalism and ennui about it. Still there’s no snickering with titles like English and Proud and Stupid and Racist, a track which is a riff-based growl aided and abetted at the beginning by some inflammatory remarks. Vocals (well screams) return for Stew For the Murder Minded; which that tumbles through a welter of emotions and like some giant angry wasp before coming to rest in a vat of sludge.

The prog element on this LP is best heard with the Cluster/Gong-style synth throb at the beginning of The Enemy of My Enemy is Me. This Cluster experiment gets short-shrift however, in favour of some brusque grunting vocals (I’m at a loss as to how the cognoscenti describe such subterranean growls), over the top of some angry riffing. By total contrast, Darker Later comes on like Sandosz in the Rain by the Mighty Amon Düül2.

Up to now things have been pretty brisk; five tracks at 20 minutes or so. However, the last (and surely keynote) track, Heavy Black Snow is 17 minutes in length. The song features fellow angry-head Rose Kemp and it’s some ride, that’s for sure. Starting with a clarion call of guitars, the entrance of Kemp (who reads a trippy story in a very clipped manner) silences the noise and imposes a meditative vibe which the band is only too happy to run with. Kemp now and then then adds some chorus vocals which makes everything feel like a Greek Tragedy (you know chorus commentary from the side of stage, etc., etc.). But it’s still a trip. The text also reminds me of the “serious” sci fi children’s books you’d get back in the early 70s and Kemp does read it in a breathless, manner, tripping over the words at times in a rush to spit out thick, coagulated sentences full of meaning and emotion.