…the DIY conference was a nice idea, and on the whole really well presented. Incubate is strong on these things, let’s have some more of the same next year.

…the DIY conference was a nice idea, and on the whole really well presented. Incubate is strong on these things, let’s have some more of the same next year. 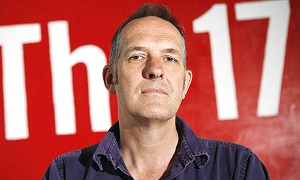 We turned up sweaty and anxious, in time for what we believed to be a rushed breakfast at the Midi theatre where Incubate’s DIY culture conference – hosted by top rock rag Gonzo – was being held. The bemused staff reported that we were at least an hour early but that didn’t stop Incendiary eating a lot of bacon and those diddy chipolata sausages you only find in Travelodge style hotels: an act of gluttony that would later wreak a terrible revenge… Still, momentarily sated, we sauntered into the main hall and prepared for Michael Azerrad who was to give the keynote speech based round his book, Our Band Could Be Your Life.

Quiet and donnish, Mr A ran through a few fairly broadly defined reasons why DIY music culture was important and then gave a number of readings from his book which, while extremely interesting for those involved in research of this kind and very well delivered, seemed to be an unnecessary pressing of the same point. The audience knew their rock history; they were interested to find out how this almost Arthurian sounding past could be made flesh again. There was a link waiting to be explained and this gap in cognisance was made visually, almost painfully obvious:  the stories of the make do and mend ethos of the Minutemen and the lengths endured by Black Flag and The Butthole Surfers in spreading their message contrasted sharply with the splurge of half-digested information (in the form of tweets and pictures) projected the screen behind Azerrad.  So where was the link between then and now? Where was the psychic pathway? How did we get from heroically collecting bottles for deposit to fund gigs, to half arsed pressing of iphone displays? And can they even be seen as different expressions of the same desire? When pressed on this Azerrad made a few good points – the revolution irrigating many other areas than music, fair enough – but it would have been fascinating to see him expand a little more on where we go from here.

After this a film: Philip Marthinson’s PressPausePlay, which seeks to deals with the new “challenges” (awful word) that creating art in our fractionalised age brings. Whilst there were undoubtedly some fascinating insights into what drives or worries intelligent and creative people (Andrew Keen and Seth Godwin giving some terrific cameos), the mere fact of watching these successful, modern types “be creative” in film is something I find utterly depressing. They all present their material like Tony Blair would when giving a PowerPoint. Inevitably there were cool skaters with tattoos and DIY film directors with beards and wearing those sub-Rasta hats that look like a collapsed steak pudding churning out the sort of generic non-human artwork that Riefenstahl could only dream of making.  And why the fucking annoying tinkly backing music?  Yet again another vague wash of ideas on a pretty bare canvas. One is left with the nagging doubt that whilst a lot of good intentions are expressed  and intelligent points are made, the whole thing was presented as if all artists do is prop up a kind of fluffy, “rad” cottage industry; the artefacts made being presented on some giant digitised nature table. Where’s the bloody rigour? Hope I’m utterly wrong.

After this there was a panel, but we were battered and needed a drink that would irrigate us for a highlight of the programme: Membranes and Goldblade leader John Robb was to interview a true hero of the underground, Steve Ignorant, singer of Crass.

Robb and Ignorant are both genial characters, and took to the stage like old veterans discussing battles they’d fought in. After a quick admonishment about the strength and speed of Robb’s Lancashire accent, the crowd settled down to a great talk in which Ignorant – prompted with skill by Robb – outlined the story of his work with Crass’s other driving force, Penny Rimbaud, and in that story showed some of the true beauties of DIY culture: not the cool or easy, or the vague gesture, but rather the power of the accidental act, the idea of DIY as a portal to self-enlightenment. To Ignorant, doing stuff with Crass was a genuine voyage of discovery. In this he has more in common with John Wilkes than the contributors in PressPausePlay. Ignorant’s DIY aesthetic was more human, more mundane, dreamier even. His reward wasn’t loads of unique visitors or making cool videos, rather he took a genuine pride in the people that he’d been able to help, namely Crass fans who saw the band as an intellectual haven or emotional prop. With this in mind, Ignorant emphasized the point of contact, a phrase that suddenly shot through this reviewer as one of the areas that really mattered with DIY culture, why do it if there was no contact?

Whether that’s possible in this supposedly meritocratic time is another matter.

A break then a secret act was announced, which we had to hurry to so as to be sure of a place. Why secret? To quote Peter Cook’s judge, we shall never know. We soon found that we were to see Bill Drummond perform The 17, his (at times interactive) polemic on the changing nature of our relationship with music. Now I’ve always had a bit of a problem with Bill Drummond, I thought (and still do) that some of his activities have been nothing short of nonsense. There’s also something of the clapped out preacher man in his confessional style which grates too. My notebook during the speech became littered with statements such as, (and I will do this in a Bill Drummond / Richard Long stylee):

BD-SHOWMAN MISSIONARY PEDLING FALSE WARES
Usual Drummond plan = glorious failure from nothing to nothing and back again
Concept of denial. Magnified self-doubt as stage show camp fire.
Akela gone mad.
Paper props as proof of absent minded dementia, pace up and down, charmer act of walking to charm… nature table for the gentleman adventurer.
Very entertaining but a celebration of what?
Argh still Papua New Guinea – Teardrops / Bunnymen thing again.

But I will say this. The performance of The 17 was funny, enjoyable. Getting a room to hum a harmony was a feat in itself in reticent Holland, and it felt good. It was also very affecting to hear about the children from the class in Haiti who had done a similar exercise to all of us but had perished in last year’s earthquake. It truly was. It was also funny to see him do his shoe shining and his whistling outside. And his point about reacting to your own kind of music, in his case the noise of his Land rover, and what – on this premise – should constitute music, was sound enough. I suppose you can say we were charmed…

After this it was off to explore some music. But the DIY conference was a nice idea, and on the whole really well presented. Incubate is strong on these things, let’s have some more of the same next year.