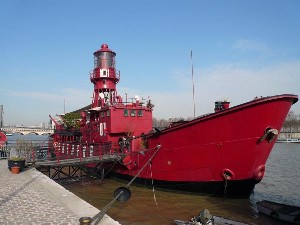 It’s the September issue, people. So to start of this series of Parisian musical diaries, it might be a good idea to explain what it means to be in Paris in September and why it’s one of the best times to go out, have a good time and – most importantly – hear some great music.

August is a dead month, when the entire French population of the city ups and leaves to be replaced by American tourists in shorts.  Unfortunately, this also coincides with a distinct drop in the number of gigs being held in the city, as some of the best venues shut up shop for an annual holiday.

So if you’re coming to Paris this September, either as a student or simply to enjoy the final days of summer in the City of Light, you can expect to enjoy a full selection of bars, clubs and gig venues that may have been quiet or even closed during the tourist season.

A No-Alcohol zone – The banks Canal St Martin are actually a no alcohol zone, although you wouldn’t know it from the crowd that line the banks on a Friday and Saturday night. This isn’t just teenagers sitting drinking a cheap bottle of plonk, oh no, this is serious business. You will find people of all ages there, many even bringing substantial picnics to give them sustenance into the early hours. And music?  There’s always music coming from the bars that line the canal, but there are usually people playing music either from car stereos or radios. This is a block party, Parisian style. What better way to start your night?

A (former) squat – After absorbing the sights and sounds of the canal, why not head further along its banks to le Point Ephémère   http://www.pointephemere.org/, which was initially an artist’s squat housed in a former dockside warehouse. Now it’s an established- and legal- cultural centre that puts on a plethora of gigs and club nights. Rub shoulders with the French hipsters and listen artists that you would find in few other places in Paris – Wild Nothing played in August and coming up this month are The War On Drugs amongst others.

On a boat – Here’s a novel idea: let’s make a club out of a disused boat with a lighthouse on top of it.  And so the Batofar http://www.batofar.org/?page=le-batofar was born. The rusty bowels of this old boat can hold around 300 people who come to listen to DJs of all genres and the heated terrace is great place to look out over the Seine and have a quick chat. Entrance is usually €10 for students, or when booked in advance, and €14 otherwise.  It’s worth it.  On 23rd Sept Franz Ferdinand are playing a DJ set here – but if that’s not to your liking, then you’re sure to find something else on the itinerary that is.