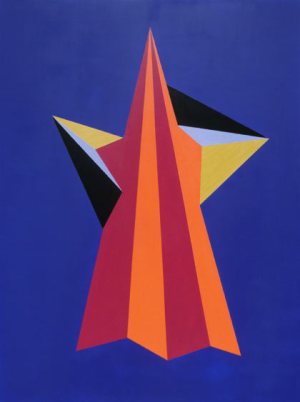 Echo & the Bunnymen guitarist Will Sergeant launches his first solo exhibition at the Penny Lane Galleries in Liverpool this winter. After being alerted to the show by the great man himself, a couple of mails led to a chance to chat to Will about his work and one or two other matters. Always an interesting chap, and someone who is now gaining widespread recognition for another creative outlet outside of his incredible guitar work, (his art has been shown at a recent Mr Brainwash event over in Los Angeles), Will had this to say.

You can always find out more on http://www.willsergeant.com/blog/

IN: What drove you to start painting Will?

WS: I have always made art for the pure enjoyment of it. Most of which has just been on paper and ended up stuffed in drawers and then trashed. I have never had the courage to take it out into the world. I have channeled a lot of this artistic desire into my side projects  “Weird As Fish” (WAF was always purely an art project / experiment) Glide involved a sound art element plus video projections. Various other efforts I have been involved in, such as putting together the posters for my “Friction” DJ nights, this satisfied the need to create visual art.

In 2002 I was invited to be a visiting fellow at the Liverpool School of art and design by Professor Colin Fallows. This was the “beginning” of the transition between making art for my own entertainment and “I started” to take it a lot more seriously.

IN: You have a strong feel for colour, you seem to like balancing strong colour contrasts and you often apply it in broad sweeps or slashes. It’s all very bold work. What do you think drives or attracts you to making images like this?

WS: This is no mystery to me. I am attracted to the New York School of painters of the twentieth century. All the usual suspects. I have recently been turned on to Barnett Newman by my friend and collaborator Professor Colin Fallows at the art school in Liverpool. He said my work reminded him of Newman. I had never heard of him at the time, my wife bought me a really great book on him. He is fantastic and sports a very fine moustache and monocle combo. There are  similarities, but I don’t suit a moustache. I’ve tried. 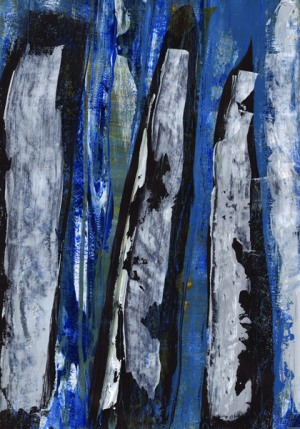 … I love the drone of Neu! and bands like them. They find a chord and stick to it. Drummond said that I was difficult to work with because I considered changing chord in a song as “selling out”. I do not apologise for this. As I said at the beginning I love the drone. I have been a fan of Eno’s ambient music from the start. I also like what I would call ambient art, for example one of my favourites is the French artist Yves Klein. There was one of his  Kline Blue Works (IKB 79  1959) in the Tate Gallery in Liverpool. If you stand in front of this piece for a short time it engulfs and drenches you in a colour with an intensity your eyes and mind cannot seem to deal with it, and you have to look away, like a single note that encompasses all the other notes and blasts it into your head. It seems things became a lot simpler in the 20th century and I like that. I can’t play guitar like  Segovia or some faster than light heavy metal guitarist. To be frank that stuff, although impressive, bores the shit out of me. As with the art I see the huge classical paintings and I am impressed by the skill but it does not move me in the same way a minimalist or modern painting does.

IN: You also seem to like certain motifs; the moth, hints of the military – any reason for these Will?

WS: The military aspect comes from my Dad’s involvement in the Second World War. When I was growing up in the 60’s, the War was still very fresh. It was always, “in the War this happened”, or “remember we did such a thing in the War”. This had a great influence on me. Playing in the street we would always play War. So that’s where that comes from I think. 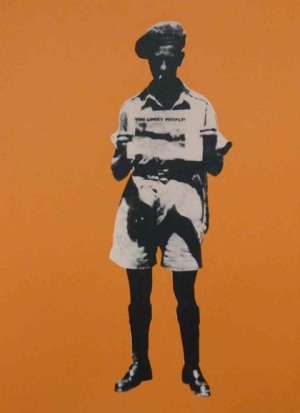 …The moth is another thing all together. The best thing about the moth is, it’s not a butterfly. 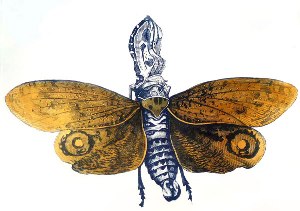 IN: I’d be interested to know how you’d equate creating your art with creating your music: firstly how do you approach both these disciplines?

WS: I approach Art and Music in exactly the same way, the same thought processes are used. I try things in an experimental way on the what you might call Abstract Expressionist work. I start with a colour and see where it leads. The hardest thing to do is knowing when to  stop at the right point. It is very easy  go too far and have to bring it all back to the start.

On the more Minimalist works such as 21st Century Fallen, I have an idea that I would like to convey. 21st C. F. is a distorted cross fallen. It represents the hopes of the future dashed and twisted. The perspective is all wrong. 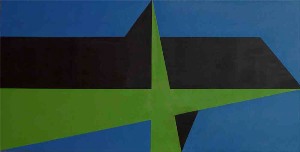 I plan first on paper in a very rough form them I do a more precise version in Photoshop or sometimes Flash. This way I can get the colours right. Then I just get on with it. I know what it’s going to look like at the end because I stick to the plan. It’s the polar opposite to the abstracts is all about freedom and restriction. Just like life, you buy some freedom by allowing yourself to be restricted.

IN: And which – music or painting – do you feel is the most instinctive to you?

IN: Do you find yourself making different visual decisions when approaching working in acrylic and screen printing?

WS:  I think I do. I am making different decisions all the time. When I combine the screen printing with the abstracts I am aware that an image will be screened on the work. I work with it accordingly, leaving areas of light or dark in the right places. It’s always great to see what the relationship between the background and the image turns out like.

IN:  Interesting what you say about instinct – especially the instinct of knowing where to stop, which I think is the key to visual creation. Maybe it’s all about the correct gesture, would you agree?

WS: The thing with instinct is it’s instinctive. You don’t know why you are doing some things, you just do them. With the painting, a lot of the process involves the removal of paint to reveal what is underneath, then the remnants of what was on the surface become like a ghost or shadow. I love this aspect of random relationships between layers.

IN:  And picking on Abstract Impressionism I find this style of work – however abstract – lends itself to public comment, balancing planes of colour & texture with a strong visual “gesture” that, in itself, can be left open as a challenge or a chance to interpretation for the viewer. Maybe – to draw a slightly crappy journalistic parallel, isn’t that very similar to adding a guitar lick or passage to a song?

WS: With music, it’s hard to stop adding bits. A lot of the things we have done have loads of stuff with too many tracks on them. They are trimmed down and things removed or small sections of larger guitar parts kept. It’s never hard to come up with ideas it’s knowing the good ones from the crappy ones.  All the works mean something to me and have a story behind them. Some of them are tied to events that have taken place on tour, or by situations I have found myself in.

I have no problem with people putting their own ideas of what the picture is about. I like the way people see different things in the work. It’s the connection of your mind and the viewers mind to see and feel completely different things. That’s what is interesting. 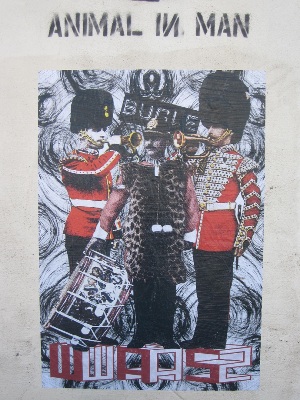 image from the Mr Brainwash show

IN:  Liverpool had some good pop artists namely Steve Jacuzzi, I’m sure you know his work for Probe & the Biscuits… anyone else from Lancs/Merseyside area we should be aware of?

WS: Liverpool artists that I have known and have been inspired by…..
The late Great Tim Whitaker (Deaf School): Tim Shared the flat with me, Pete, Jake, and Les. Number 19 Aigburth Drive. Tim had the big front room set up as a studio. Full of his large works of collaged tissue paper and painted images. Most of which he sold very cheap or gave to friends.
Ged Quinn (Wild Swans): He was a Liverpool artist at the time I knew him. He now lives somewhere like Devon or Cornwall. I remember going to his flat and him showing me some Bird Illustrations that he was doing for a book about birds, funnily enough.