There has been much debate over what our saviour will look like when he arrives. Well now your humble author can put an end to years of religious speculation, and here’s a clue, he’s not a hippy.

There has been much debate over what our saviour will look like when he arrives. Well now your humble author can put an end to years of religious speculation, and here’s a clue, he’s not a hippy. 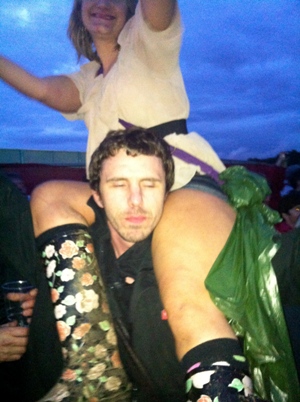 Stars explode before my eyes. I’m reeling. Staggering around. Struggling for breath and I’m not sure how much more punishment I can stand. It was unexpected. Everything happened so fast. But I refuse to give in. Defeat is not an option. All I need to do is dig deep, release those hidden reserves and I’ll emerge victorious.

But it was futile. My knees were about to buckle. When I collapsed we’d escape serious injury, but we’d be covered in mud. I would be less than happy, but the girl I carried would be furious, and, more importantly, I had no idea how my new best friends would react.

I’d made a mistake. The skinhead who grabbed me wasn’t an assailant. He was my knight in shining armour – well his pate was glistening. Overcome he was trying to hug me. The relief was palpable and I temporarily lifted my moratorium on public displays of affection. (In case my family is reading this it only applies to random strangers not associates.)

Seconds ago I was terrified, now I was embracing my rescuer and babbling about how this was the best day of my life! Now the euphoria has subsided, I’m not sure this is true. It was enjoyable, but did it compare with the Saturday I spent at Thirsk’s Museum of Freaky Farmyard Foetuses? Probably not.

Given my current situation, a garret dwelling, dyspeptic, heavily-overdrawn writer it should be unsurprising that I’ve ignored any advice I’ve ever been given. Whether proffered by my mother or talking cats called Charlie their words fell on deaf ears. I have walked my own path, and it has not been easy. Thanks to never eating my greens I have the teeth and gums of an 18th century mariner and my voice is a mere rasp from cursing the darkness but finally I feel vindicated (and have a more than adequate supply of candles). I talked to strangers and was ecstatic. If mater was mistaken about this, perhaps she’d made other errors. Maybe I wasn’t worthless.

It was shocking how the Roses reduced two adult males to gushing, love-struck teenage girls. Thankfully my voice is better suited to anonymous phone calls than screaming and, due to the lack of toilet facilities, my underpants were in no condition for throwing. My fifteen-year-old daughter CJ deported herself with more decorum at JLS and she came back with Aston’s wet-look, pink lurex thong.

My new bosom buddy also came replete with a posse intent on having a good time. No longer was I an outsider. I belonged. Admittedly, due to my flat cap and wax jacket they referred to me as Farmer Giles, but I was just grateful not to be alone and that I’d left my wellingtons at the tractor. I’d introduce them but I can’t remember their names. I think they were from the midlands… 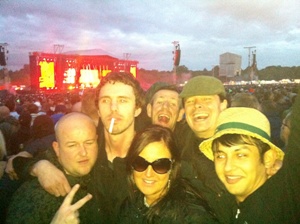 And what of the band? The Stone Roses played the entire first album, a selection of early singles, and even treated us to Ten Storey Love Song and Love Spreads. Thankfully though the Second Coming remained the elephant–stone-wandering-around-the-park with a couple of corks stuffed in its trunk to stop it trumpeting its wares and ruining the atmosphere. Ian Brown personifies sprezzatura, but even he would have been unable to control the crowd if he had uttered the dreaded words: ‘Here’s a song we’ve just written.’

To an extent the band were irrelevant. The gig: expensive outdoor karaoke. Everyone was singing and Mr Brown was unintelligible above a discordant chorus of half-remembered lyrics. He could’ve been standing next to me and I’d have been none the wiser about the quality of his voice. New material would have removed this benevolent buffer.

This was not a challenging performance. It was not Psychic TV, Amon Düül, Scott Walker or Clayderman. More Complete Stone Roses than Stockhausen, a tribute to themselves. But this is what we wanted, and there was something special about the day. We were in the presence of greatness, and the audience were there to worship not spectate. I never heard St Peter, Billy Graham or the Reverend Jim Jones preach, but they would’ve struggled to create such a numinous atmosphere. While they played I would’ve obeyed every behest, even drunk deeply from suspect vats of Kool Aid.

And it was in the context of this near religious bliss that the girl asked if she could sit on my shoulders. A gentleman, I agreed immediately. Sylph-like, she must have been sucking a neutron star because I thought my collarbone was going to snap like a baby’s arm.

Due to my sinful and dissolute life, combined with an allergy to woodwork, I have little empathy with Jesus, but I can only imagine how hard it was to dance with the devil on your back. I found it hard enough standing with a dainty little thing on mine.

Abandoning a damsel in distress did not come easily, but I didn’t wish to get saddled with her. The tune ended, and I deposited her delicately on the ground.

‘You’re bound to get a better view from up there,’ I said pointing at the tallest of my new associates. I certainly wanted to impress my newfound companions, but not at the risk of personal injury.

If I could get away with it I was more than happy to stab one of them in the back. And, in this instance, there would be no repercussions, as after an hour or so with her on his back he’d be lucky if he walked again. And given the extortionate fees of osteopaths he wouldn’t have the funds for either a lawyer or hit man.

I watched, smiling as she clambered onto his shoulders, turned my back on his suffering and started to mosh.

NEXT ISSUE: Parting is such sweet sorrow….