Even if Rick Wakeman remixed our entire oeuvre it could’ve been released as a single.

Even if Rick Wakeman remixed our entire oeuvre it could’ve been released as a single. 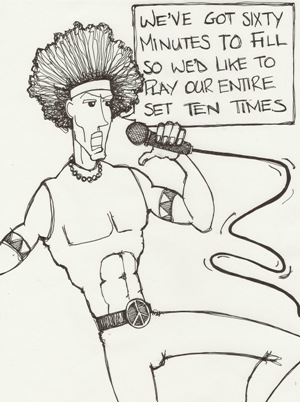 I wake screaming each morning and fall asleep sobbing into my dank pillow. One defeat follows another, suffocating any hope, makings death’s cold embrace more inviting than any lvers. These pitiful scribblings alone distract me from the existential terror paralysing me. It is awful, but what makes it unbearable is the knowledge that it could have been so different, if only I’d dared say ‘yes’.

After many years effort I was trying to finish side two of Throbbing Gristle’s masterpiece 20 Jazz Funk Greats. Side one had ended hours ago and I was waiting to recuperate sufficiently before turning it over. Suddenly a new sound interrupted my recovery: a jarring, insistent cacophony that shattered the healing silence. Terrified, I lay there wondering what supernatural force had caused the record to flip over and start to play, when it suddenly occurred to me that it was probably the phone.

Curious, it’s never done that before I thought, and started frantically rooting around in all the newspapers, used condoms, ashtrays masquerading as K2, takeaway cartoons containing intriguing flora and fauna, half-finished manifestos and crosswords, abandoned poetry and gigantic heaps of monkey nuts that had accumulated around me over the preceding months. (If I’d been less of an aesthete and more of a businessman I could have exhibited it and won the Turner Prize, pre-empting the desperate, Ms Emin’s attempt to shock by a decade. Foolishly I thought my squalid living conditions were an embarrassment rather than art.)

The telephone had been used to keep in touch with an ex-girlfriend, and it had been so long since it rang that I’d forgotten what it sounded like. It was yellow and black, like a bee, but rang rather than buzzed, which was a shame as I could have used it to ascertained which friends were apiphobic. Alas polyphonic ringtones were not invented, so I relied on astute judgement to reveal guests’ weaknesses. Manically I scattered the accumulated detritus until the phone was revealed beneath a gilt tortoise shell studded with jewels. (Without doubt a decadent anachronism, yet Oncle Jean certainly knew how to spoil his nephew.)

I answered cautiously, concerned that my old flame had remembered the Jackie Collins novel I’d borrowed with onanistic intentions and wanted it back. Potentially problematic as I had burnt it during the subsequent paroxysm of remorse and lacked sufficient funds to replace it.

‘Is this’, a voice enquired, ‘the number for the Travis Bickle Combo?’

‘I’m the Entertainments Officer, would you play the Summer Ball?’

‘Did you see us perform?’ I asked.

‘Talk to someone who did and ring me back’, I suggested.

I replaced the receiver, baffled and slightly apprehensive. I assumed it was an elaborate ruse, but this seemed unlikely as none of my friends had phones, although they could I suppose have used a public one. But who would waste 20p winding me up when our tipple of choice Eurobrew (allegedly surplus from the one of Continent’s plethora of super strength lager lakes) was 40p a can (not bad value considering it was 8%, which almost compensated for the taste and inevitable aftershocks)?

I turned over the record, lay down and my mind, in a last-ditch attempt to distract me from the preposterous, yet magnificent, Genesis P-Orridge and co, drifted back to the night of the competition.

Since the dawn of time there have been many unexplained events, UFOs, corn circles, spontaneous human combustion, how Disney now own Winnie the Pooh, the continuing success of JLS, but none are more perplexing than how, based on the applause of the audience, we came second. Who knows what we could have achieved if Cowell and his evil minions had stalked the earth in the early nineties? By now we’d be bigger than The Beatles or spending our days making fish tanks in Wigan like Rick Waller. Either way my life would have moved on in some way.

I suppose we were a breathe of fresh air compared to the usual busker fare: earnest, wan, curly-haired aspiring singer-songwriters with socialism in their hearts and Dylan on their walls, trying to remember which chords to play without forgetting the lyrics. We were a spectacle. An anarchic Cirque du Soleil. Plus we knew how to throw a party.

I did have concerns about the TBC performing again. The sort of consternations that liquefies your bowels quicker than a rotavirus and keeps you awake for days like a bump of Heisenberg’s meth. I was already self-medicating to control the flashbacks, and we wouldn’t survive a second performance, especially if people had paid hard-earned cash. Luck can only get you so far.

The other problem was our repertoire: played in full the last time we took to the stage. Forget quality, we didn’t even have quantity and we still couldn’t play. Even if Rick Wakeman remixed our entire oeuvre it could’ve been released as a single. Plus, as both songs were cover versions we’d have to split any royalties with the Stones, it would hardly be worth our while. (That said, without the Hell’s Angels to protect them we could probably handle it if they kicked up a fuss. After all, we’d fought our own Altamont.)

Yes, the more I thought about it, I’d done the right thing. It was irrelevant anyway. He’d never ring back. As soon as he spoke to someone who had witnessed our last debacle he would realise what a close shave he’d had.

But then again what if I was wrong? What if we became an overnight success. A phenomenon. The hard work required learning to play instruments and writing some songs would’ve been wearisome, but what about all the money, power, fame and hedonism. True, I’d have been dead within 12 months, but what a year.

Was I insane! We’d had a paying gig. The dream of unsigned bands the world over and I’d tried to talk the promoter out of it. I had made a terrible, terrible mistake.

Next month: I’ll do anything