…here’s a band that have probably – after a good decade of high quality and often magical work, produced their best record yet.

…here’s a band that have probably – after a good decade of high quality and often magical work, produced their best record yet. 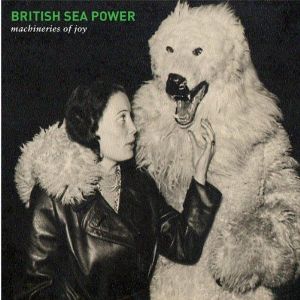 I’m writing this review on the day that I hear Razorlight have split up. I’ve just seen it on someone’s timeline. No-one seemed that arsed. Maybe it’s a hoax but somehow I find this event significant, sat here as I am, writing another review about another British Sea Power record: writing about the fact that this band seemingly plod doggedly on, like some ghostly lost legion forever roaming through misty border country; never giving up, always following set rituals known only to themselves but never stopping to rest or ask the way. Brighter comets have in the meantime burnt themselves out, proved broken records or one trick ponies, or felt the masks of fame eat into their own faces; but here’s a band that have probably – after a good decade of high quality and often magical work, produced their best record yet. And here’s another riddle: it’s released on that most dual of days, April the First, the Fools Day, all jokes and japes till twelve noon and then serious consequences for those who transgress after. What’s that about?

I don’t know. What I do “know” is that more than any other record (maybe outside of the superb Man of Aran) they seem to have found a balance and a groove that doesn’t feel the need to unduly assert itself.  Playing Machineries of Joy makes other earlier efforts sound like they had something to prove. It encourages a retrospective glance over the shoulder – if only to highlight the growing pains and tussles for attention and space that seemed, ultimately, to undermine a number of their other records. Of course, these other records were British Sea Power records and (in this fanboy’s eyes) a hell of a lot better than many others. And British Sea Power in many ways never had anything to prove but, rarefied airs or not, it can get lonely on the summit, and the band has always been determined to make their mark. But sometimes the most effective messages are those that are kept simple and doubt free.

Make no mistake: this is a balanced and relaxed record, well thought out and ultimately a magical thing to listen to. I often felt they either undercooked or covered matters in bombast or forced weirdness, sometimes – frustratingly for such a skilled band, one with such a unique worldview – they often seemed to have a mental block when it came to presenting their work: and one suspected them of over producing things, or knocking out a sort of cut and paste/ suck it and see Sea Power to get the creative process over with. Luckily the only track here that sounds like “British Sea Power by numbers” is Monsters of Sunderland which –despite being pleasant and amusing enough – isn’t as good for my money as any of the other tracks.

No, on this LP, BSP settle to doing what they do best, better than nearly everyone. Their superb sense of melody and their knack of creating an occasion through textures and mood is highlighted, often through, (it seems), just relaxing and repeating the “best bits”. The opener is a magnificent take on that metronomic Neu! beat (Für Immer springs to mind), and this repetition is also heard to stunning effect with the superb Radio Goddard with its rousing, swelling chorus, and the brilliantly misty eyed Loving Animals. Their brilliance at making the oddball sound perfectly acceptable, the strange soliloquies documenting the housebound eccentric’s slightly fuzzy sense of perception is unrivalled.  A lament to a Pyrex dish? It’s coming right up in What You Need the Most; a track that also tags on elements of the Bunnymen’s Killing Moon. In fact, Yan is turning out to be a great chronicler of the surreal: what with the classic Zeus from a few years back, and now the fizzing rocker K-Hole (named it seems after everyone’s favourite rock and roll horse tranquilizer) he seems adept at framing the most weird experiences in the most deadpan Northern comic manner. He could be the next Al Reed.

Their feral, strange side is seen with Spring Has Sprung; the sort of paean to the natural world around them that no other band can master. Hamilton’s innate gentleness courses through this  sinuous track; at turns wild and über-naive and the sort of pastoral communion that can, if you’re feeling overly sensitive, induce you to floods of tears.There’s also A Light Above Descending which, (like No Need to Cry or even maybe No Red Indian) is an appropriation of that sort of wistful Velvetsy plod – Pale Blue Eyes style. When A Warm Wind Blows Through The Grass is another matter altogether, maybe their masterpiece, the Crone mother Demeter’s slap down to the boy Apollo’s youthful muscle flexing on The Lonely. That this coda-cum-cuff-round-the-ear comes a good ten years later is neither here nor there. Time is one thing BSP have on their side in spades. More than any other BSP track (apart maybe from True Adventures) it sums up their duality – one that spans both this and other unseen worlds – perfectly.

But enough. It’s enough to enjoy this record, Demeter, Al Reed, Ketamine or no; and love them while we have them. Like so often with BSP, it’s not really worth finding out about things or facts, it’s better to make your own myth around them, and we all know what excessive fact taking can do in this nascent internet age. Better to obsess over myth and suggestion and dream, and just allow the band to provide us with the leper’s squints into their psyche. It’s enough. And in some ways  doing just that keeps you human.