Despite the long jams and proggy reference points, it’s a supremely easy record to get along with, easy to drop in to, as and when.

Despite the long jams and proggy reference points, it’s a supremely easy record to get along with, easy to drop in to, as and when. 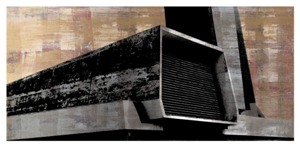 I love this record: and the good news, certainly for me is that it’s also one of those releases that just keeps rustling up more angles and secrets the more you play it.

Of course it would be easy to stick with the fact that it’s made by three of Echo and the Bunnymen and have done with it. Founder member Will Sergeant, current drummer Nick Kilroe and original bass player Les Pattinson are Poltergeist and I’m sure plenty of people who will go and watch them or buy this LP will be those who want to see Will & Les back on stage together. Fair enough. And you do get the distinct feeling that this project seems be one where Will and Les are determined to make something fun, something that captured that daft, indefinable, independent spirit of old.

Luckily for those with Crystal Days bootlegs, there is evidence enough of things that sound like Echo throughout this record; those crashing passages that somehow mash sound and melody together to create those huge swirling gestures and breaks that were key to the Bunymen’s sound back in their imperial phase.

It’s a refreshing, focussed and bullish LP, bits sound like when the Bunnymen first reformed back in 1997, those early b-sides which promised so much and flexed so much muscle, tracks like Watchtower and Colour Me In…. the mood is determined, up for a fight. There’s that old and intoxicating sense of mission about Your Mind Is a Box… right from the off and best seen with the opening numbers Cathedral and the title track. These two are possibly the most Bunnymen of all with their rumbling, driving rhythms set up by Pattinson’s powerful bass playing, the trippy effects, that vague sense of raga, and the direction and mood informed by those dictatorial guitar lines Sergeant spits out.

So yes, it would be easy to stick with the fact that Will and Les are making a glorious racket together again, but this the record gets interesting when the Bunnymen feel is replaced by the long drawn out pieces where Sergeant’s love of psyche, prog rock and film scores is laid bare. His recent solo LP, Things Inside coyly hinted at this too, but now, with a band behind him, there’s a chance to explore his musings in a more multidimensional manner.  The song titles are tripped out, (Dawn Visits the Garden of Evil sounds particularly Crowley-esque), and there are long burned out explorations of mood with tracks like Dreamer Dream of Spectrums and Psychic Warfare (the latter clocking in at nearly 10 minutes.). Dawn… is a tremendous piece of music, driven by two powerful and complimentary guitar licks, the swaggering, smouldering rhythm ticking along menacingly, never getting slack.

Despite the long jams and proggy reference points, it’s a supremely easy record to get along with, easy to drop in to, as and when. It seems that Poltergeist are happy for matters to develop at their own pace, nothing really feels forced, rather the decisions about what to do seems to be often on a whim: when they get bored of making one kind of noise, they simply switch and make another, regardless of whether  they’re mid track. That last remark may sound like it’s teetering on the bloody obvious and a classic reviewer’s get out clause to describe the fact that yes, you got it, the music often changes tempo and tone during long tracks…. but with this kind of sound it’s painfully apparent when sections feel glued together to create an impact.

Thankfully Poltergeist skip round that obstacle with some aplomb. First Signs of The Plague and Psychic Warfare are good examples to call on, the former dreamily toying with the idea of being a melancholy mood piece; it skirts round the sort of conceit The Moody Blues would have cooked up on On The Threshold of a Dream before giving up and wigging out classic psyche style. Psychic Warfare is a peppy bombastic strut à la SAHB, until it decides that it’s milked that attitude too long, morphing into a brilliantly laid back, widescreen tail-out. It’s reminiscent of the stuff that Wolfgang Dauner, Johnny Teupen or Roy Budd would have cooked up back in the early 70s.

There are some moments that start to slide into dreamy, Odessey and Oracle territory. The signature tune on the record is the Book of Pleasures, not only for its trippy melody but for the confidence of the delivery, the band know they’ve made something special with this piece and milk its floaty vibe for all its worth, constantly keeping the music on tenterhooks, never giving the sound the big release it thinks it deserves.  Lune Deeps is a nice, reflective tail out with a grumbling coda.

So there you have it. A fine, fine record and one that seems to keep on giving.