Whatever, Kosmischer Läufer is a clandestine, Loki-esque version of what Dame Vera Lynne pedalled with White Cliffs of Dover. Or Public Service Broadcasting do with their debut release.

Whatever, Kosmischer Läufer is a clandestine, Loki-esque version of what Dame Vera Lynne pedalled with White Cliffs of Dover. Or Public Service Broadcasting do with their debut release. 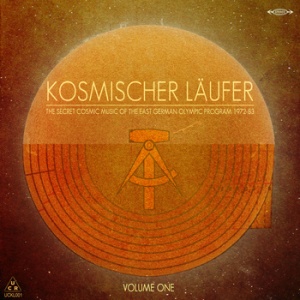 What’s in a name?

A week ago, I was contacted by a pal who plays in a well-known, very well-respected band; one could justifiably say a classic band. He shares my simple love of 70’s psych and prog, and my nascent and sometimes fitful interest in digging out old partially forgotten sounds from that decade.  I’d recently mailed him a spare CD of the extraordinary Rodion G.A. record and by way of return he’d mailed me a link to something that he, in turn had recently been alerted to, by – guess – another mutual musician pal.

To add further background colour (and, yes, rather more preposterously), I’d just finished reading of an academic journal issue dedicated underground music in Central and East Europe during the communist era. Fired by the idea of bands I probably would never hear but enjoyed reading about I thought, ‘ooh how funny this should turn up now’, and gave the link a play. It was a Bandcamp site which did puzzle me for a second, (I initially thought that something of the magnitude of the East German Sports Federation’s official training music would get a release with more bells and whistles, and would coyly be released via one of those classy re-release labels like Ace), but then the mercurial workings of this modern, data-tastic world often confuse me.

What I heard (and what you may hear too) is possibly the best Neu! / Kraftwerk rip-off around. I can’t really think of finer.  I just kept playing it over and over again. I skipped the biography and thought let’s read up later. The music had really gripped me.

There was drive and purpose to the sound; it was a naked, shameless, barefaced copy of Krautrock’s more celebrated moments. Elements of Kraftwerk’s Autobahn, Neu!’s Negativland and Neuschnee were there in full parody.

A lazy reading of the biog followed:

“For the first time since it was recorded in East Berlin over 30 years ago the music of Martin Zeichnete can finally be heard. A disciple of the Kosmische Muzik of the likes of Kraftwerk, Can and Neu! that was drifting across the Wall from the West, Martin’s idea of using the motorik, hypnotic beat of krautrock in the training of athletes was taken and exploited by the DDRs Olympic Committee.”

Wow, this Zeichnete fecker must have been some Head, not only getting his mits on that Düsseldorf sound but then modifying it in such a clean, hard, ruthless manner. This music had what a lot of these modern day “Kraut”-inspired bands miss; their apologetic appropriations of that driving racket lack the artistic ruthlessness, the purpose, the will. This wasn’t just the appropriation of a brilliant musical style that had enough accumulated credit and respect over the years. This wasn’t some desperate attempt to attract an audience by lazily using repetition and two chords. This wasn’t some musical safety net in filling out 20 minutes. No. This Kosmischer Läufer LP is pretty formidable in places, it kicks down doors and no mistake; Tonband Laufspur is a vicious, pulsating track, welding elements of Negativland and  After Eight onto its metallic body, whereas De Lange Gerade is a fabulous reworking of Neuschnee and Autobahn in equal measure.

Playing Kosmischer Läufer got me through a particularly shit visit to the dentists, and through an incredibly boring and slow train journey from Nieu Vennep to Leiden. For these two things I will always be grateful to Kosmischer Läufer.

As is often the case when you end up playing something on repeat, I started day dreaming about the whole thing: forming vague half-thoughts on the respective natures of the DDR and the Bundesrepublik. Not least, musing on the irony of those personal, artistic battles fought by the likes of Dinger and Rother, Hütter and Schneider to define a truly free and German rock sound; one that was suddenly (on the evidence of Kosmischer Läufer) harnessed to that rigorous steroid-filled ambition just over the fence. Those metronomic beats, the most celebrated aspect of their artistic individualism, were now re-programmed to drive on a bunch of dosed up athletes to greater effort and excellence.  The music was now turned in on itself, tuned in to sound tracking the last creative gasp of that strange regime. And yes, this all had some historical provenance: along with the space programme, and building a mighty big fuck-off wall, the DDR’s main concern was accumulating gold medals*. It’s worth noting that achievements were given musical expression: the record Die Erde Dreht Sich Linksherum celebrated Sigmund Jähn’s space trip from 1978 for example.  And the appropriation of Western ideas was something the DDR’s top brass was certainly happy to do, especially if it could find a way to use it in some form of indoctrination. An estaz kultur given a radical ideological twist.

Was Kosmischer Läufer from the same half-forgotten source as Kosmos (lied)  and Die Erde Dreht Sich Linksherum? I hoped so. Even doubts – such as wondering whether the DDR’s Leitungssport, or DTSB allow a musical piece with the term Kosmische in – were placed on hold.

I hope this tale of file and CD swapping, 70’s daydreaming and mild mannered swotting up undertaken by middle aged men is not getting too boring. Anyway, because I’m an impulsive fellow, I thought, bugger me let’s pass this on, so onto a popular social media site I went and gobbed off to people who I thought might dig it.

Then the wheels fell off.

Comments came back from people I’d tagged on my over excitable Facebook post. Comments like: “those would be some pretty clean tapes to sound as good as it does…hmmm” Or, “great story and if it is as I suspect, a fake, I just wish I’d thought of it first!”

Professional journalists, people with good reputations, people more experienced and wary of such matters, and not blogging dabblers like me, had obviously done their homework and checked out the names and history of the recordings. And found a big fat zero in terms of actual, authentic proof that these recordings were what they said.

And apparently – if you want to buy the files, payment goes to a gentleman who is a member of Scottish ‘Krautrock’ band The Magnificents.

But then I started thinking.

Lots of people talk about the “academisation” of rock nowadays.  Even if this phenomenon not wholly accurate, there is the vague feeling abroad that you can’t enjoy something anymore without having an angle, without having to check things out, so as to be safe in the knowledge that it’s been “peer reviewed”.

I mean you could laugh about it all and see this relentless cataloguing and appraisal of “rock’s glorious past” as a sort of mad Antiques Roadshow hybrid, with John Lydon taking the place of Arthur Negus or Hugh Wheldon, (or whoever presents it now… Fiona Bruce?) Or Gandalf swapping bird lore with Radagast the Brown (whilst listening to Mythos), or Lovejoy on a bucolic, soft focus Home Counties mission to locate some Todd Rundgren tapes.

Fair enough. I think this attempt to prick that bubble and also take people for a ride is pretty healthy; the worst crime is that someone can have a laugh at my expense. It won’t be the last time. And it brings up the notion that no-one really controls the way you should react to music, (until a truly dystopian future time when where your tastes are controlled and given expression by pre-programmed implants). Until then, whatever a critic says about the importance of Neu! 75 or The History of The World that judgement will be at best only a guide, not an order to enjoy or dismiss.

I wonder if this is the best way to get music like this talked about. If this had been a normal release we may well have been bored by it and dismissive of it within seconds. Like Han van Meegeren, the Dutch painter who copied Vermeer and Hals to bring attention to his own “authenticity of artistic feeling”, maybe this Kosmischer Läufer LP is a bold attempt to say “who says we can’t own this fucking sound anyway? Fucking critics with poles up their arses?” I can sympathise.  Though I wouldn’t go as far as to castigate The Magnificents with the quote given about Van Meergeren; “A gifted technician who has made a sort of composite facsimile of the Renaissance school, he has every virtue except originality”, it’s a similar move.

Maybe not such a desperate one either… maybe it’s less a modern day take on Peter the Photocopier’s methods, and more an update of the Nigel Simpkins / Cally Callomon / Times Encounter act: (Times Encounter is a FANTASTIC trickster mix that also cocked a snook at the highbrows http://www.youtube.com/watch?v=0TFvYDg-PII) . Or something similar to Bill Drummond’s modus operandi. Drummond  cooked up a similar conceit in his book 45 with the tale of a pretend Finnish folk artist, (though I’ve not read that book for ages, and can’t recall properly, and anyway Drummond’s upper sixth form pranks always left me cold.)

Whatever, Kosmischer Läufer is a clandestine, Loki-esque version of what Dame Vera Lynne pedalled with White Cliffs of Dover. Or what Public Service Broadcasting do with their debut release. All these records tug at the same emotional, nostalgic heartstrings, albeit using a different subject matter:  where PSB (however ironically) & Dame V use the hoary old spitfire/Everest/WW2 feel good Brit-isms this Kosmischer Läufer employs a rarefied sort of nostalgia, a nostalgia for something we certainly wouldn’t want to experience. “I looked across the iron curtain for a greater dignity” sang Orange Juice on In A Nutshell back in 1980 and there’s the rub. Digging Kosmischer Läufer sort of plays up to our curiosity, and tacitly allows and approves of our rejection of all the old patriotic shizzle with a safe mirror image of something we don’t need to physically involve ourselves with. But something that’s still, erm, cool and not likely to get any admonishment from our pals and acquaintances.

But balls to all this.

Maybe the band that made this needed the “disguise of authenticity” to really let rip and just shamelessly enjoy playing facsimiles of these old classics: and maybe get some praise for the music along the way. If canny operators like Madonna can rip off Abba and get creative acclaim, or toothsome family favourites Sugababes’ can take Gary Numan’s Are Friends Electric out on the town and rename it Freak Like Me to rapturous applause… Why not some people obsessed by Neu!? After all pop bands regularly rework and present original and edgy material for their swathes of ingénue fans. Why can’t this kind of music or these “kinds” of musicians be allowed to go through a similar process by their peers?