it’s obvious British Sea Power are not the band they used to be. No. They’re better than that. Far better.

it’s obvious British Sea Power are not the band they used to be. No. They’re better than that. Far better. 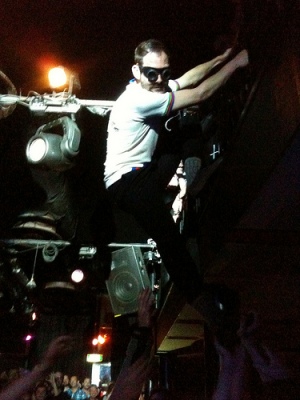 There have been robots and running men, ping pong tables and Turkish weddings, flower bulbs, fake horse heads, bears (more of which later) and oh so much more. Incendiary have followed British Sea Power for pretty much all of our website’s existence (and before that! – Richard) and there have been many tales to tell. From the first time we watched Eamon Hamilton climb off the Melkweg stage, wander through the crowd banging his little drum and head off into the street with a stream of laughing youngsters following his hard hat into the sunset, it’s fair to say that this band have captured our attention like no other. In fact, for some members of team Incendiary that appreciation borders dangerously on obsession, which is why, for once, I’ve been handed the reviewing pen and asked to put down my thoughts on tonight’s proceedings.

And so, we come to Bitterzoet, Amsterdam. As a venue, it’s a disgrace, quite frankly. The room isn’t big but the amount of steps in the building make it feel like a real-life Escher painting, and the low balcony and deep, empty corridors that run off it play havoc with the acoustics. Seriously, if you’re not on the dancefloor, the sound is frankly terrible. But here’s the thing; I’ve never seen a bad gig in here. Let’s face it, it’s not a venue at all, it’s a pub and there’s something less ‘official’ or ‘formal’ about seeing a gig here. No matter who is playing, it feels like you’re down your local boozer on a Friday night (or Tuesday, in this case) watching a band, not in some purpose built, established venue. In fact, for many of the gigs that I’ve seen here – and tonight was no exception – being in the crowd felt like being at someone’s birthday party rather than a concert. It felt like I’d been invited to something special and, who cares if the sound was fuzzy, it was a lot of fun.

But let’s get back to the band for a moment shall we, because they’re what really matters. At times, the gimmicks, stage props, costumes and on-stage climbing activities can get in the way when talking about British Sea Power. Of course, they entertain and more often or not, there’s a story to tell about an on-stage incident – usually involving Martin Noble and something climbable – but tonight, for the most part, those gimmicks are set aside. In fact, musically there’s a real change in them too. Simply put, they’re not as manic as they used to be. There’s still far too much changing of instruments for my liking, particularly for an hour long set, but there’s a focus and a sense of clear purpose and direction emanating from the band that feels very different to the many incarnations of this band we’ve seen throughout the years.

Machineries of Joy is a very different record from anything they’ve done previously (outside, perhaps, their scintillating Man of Aran soundtrack) and yet it’s still an album you can’t imagine anybody else coming up with. The album feels like a distillation of their sound. It’s certainly the most coherent album, from start to finish, that they’ve ever done and tonight it’s the songs from that album that stand out for me. They may not provide the anthems, No Lucifer and Waving Flags take care of that – both sounding quite monumental in fact – but the new songs seem so much stronger than the rest of the set. Stronger, leaner, more fierce.

A lot of the joy I’ve received from listening to Sea Power in the past has been gained from a  sense that they’ve managed to pull something beautiful or exciting out of chaos. I always got the impression that they could, at any moment in a song, completely fall apart. The excitement came from the fact that they always held it together, as if despite themselves on occasion, but here, tonight, I saw a different band. You can’t pull Machineries of Joy apart, it’s too solid for that. You can’t argue with K Hole, or Loving Animals; you’d lose. Hell, even Monsters of Sunderland, a track I’d somewhat dismissed as a kind of weak-link on the album, kicked seven bells out of me tonight. A reappraisal will indeed take place in my household.

The biggest surprise though, was just how A Light Above Descending simply destroyed Remember Me. How such a crowd favourite could appear so weak and almost childlike, inconsequential even, is testament to just how fucking good that new song is.

But here’s where it all kind of breaks down for us on the objective front though because, after a simply incredible St Louis, your dear Incendiary editors were hurried back stage, missing most of What You Need Most in order to climb inside BSP’s bear costumes. And so it was that White bear (Richard) and black bear (me) followed the band out for an encore that mixed Carrion and All In It into a frenzied, shambolic mess. We staged our own ‘Kinnear out’ protest, pinning placards to bear claws. (Fuck off “Roy” Kinnear – Richard) We jumped, we ran, and we pretty much trampled over everybody. At one point, there was a bear hug between bears – at which point neither of us could see a bloody thing! – and there was a lot of dancing and sweating and somewhere in the midst of all of this nonsense a mosh-pit started. A proper one too, not just a couple of guys pogoing up and down and falling on people. Martin climbed up onto the balcony – don’t worry kids, safety goggles were worn – and elsewhere there were handstands on stage, crowd-surfing and one bear even dropped his furry trousers (I’ll not say which). Frankly, we had a good time in those heavy, sweaty bear suits and judging by the amount of camera flashes that blinded our eyes, we think the crowd did too, but as for how it actually all looked and sounded, we can’t really say.

What we can say is that it’s obvious British Sea Power are not the band they used to be. No. They’re better than that. Far better. Indeed, Martin Noble alone has developed into a guitar player of such skill that the emotion and, at times, tenderness of his playing can bring you close to tears. He’s an extraordinary talent in a band of real power. And what a band. A few days earlier, Holland gave host to a festival entitled Best Kept Secret. Portishead were headlining. Now then, if Portishead are a best kept secret, then what kind of underground level conspiracy ring do British Sea Power exist in? They’re still the best band nobody has heard of and that’s a crying shame. I don’t know what slice of luck they need to find that kicks them up to another level, but they’ve got the talent, they’ve got the drive and oh my word they’ve got the songs.

Fuck it, they’ve even got the bear costumes!

(The Incendibears would like to apologise to any unfortunate crowd members trampled during the show. And, most importantly, Joe Kinnear can fuck right off!)