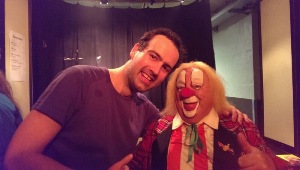 Bassie! (and the Subhuman)

Last month, Utrecht’s Snowstar Records celebrated their 10th birthday. As a hard working, chipper and often inspiring label, one that releases work from some fabulous artists such as I Am Oak, Herrek and the Subhuman (in a field that is often overcrowded and consequently diluted in quality), it’s only fair they get recognition for all their efforts. We caught up with main man Cedric Muyres after the stress of his 10th anniversary bash at the dear old Tivoli had receded.

IN: You have a very clear ethos with Snowstar from the selection of the music to the artwork. Well, it seems that way from where I’m standing. What did you initially want to achieve with the label?

CM: That plan actually formed along the way, as it all simply started to release my own band’s album, which was a punk rock one! Gradually I started listening to calmer music, and Snowstar Records became that; a blend of folk, singer/songwriter, indie but with a punk rock-attitude and –work ethos. I always wanted to help give music I love an audience. And that is still the case. If I discover something I really like, I just have to work with it because then I’m convinced there are more people like me that will really like that particular artist, and then I want to find those people.

IN: And do you think you’ve got what you wanted after these 10 years?

CM: Yes. I get very happy looking back at those 10 years, and more important: excited for the next years coming up!

IN:  Do you feel that the music on Snowstar is also affected by where the label’s based, or (which may be a better thing to say) the label’s spiritual home, Utrecht? And why?

CM: I do think that Utrecht has a music scene that’s really alive. There is a LOT happening here, and there are lots of opportunities for artists as well. There are enough places to play in all varieties of size, all with their own audiences. I am very happy and feel lucky to be a part of the Utrecht music scene. Not everything we release at Snowstar Records is from Utrecht, but it does play a big part in the label.

IN:  Cedric, do you secretly crave to release some thrash or spazzcore? Do you have fantasies about burning piles of acoustic guitars?

CM: Haha, I do like to listen to loud music myself. Besides the label, I also work with Nobody Beats The Drum, which can be a wonderful noise, I still put on some punk at home, and I just saw John Coffey play a great show in Tivoli. But I don’t really think thrash or spazzcore would fit Snowstar Records; although there are no rules, of course. I would like to see Kim Janssen explore his more electronic sides and Thijs (I am Oak) keeps saying he’ll make a black metal album one day…

IN:  10 years is a long time to run an independent label. And you had a party last month, tell us about that?

CM: That was amazing. It was a LOT of stress and on the night itself I could only see few minutes of every show because I was constantly running around and greeting people, but it was heart-warming. We took over Tivoli Oudegracht, which is one of my favourite venues in the Netherlands, and is unfortunately closing next year, so I was happy we could still celebrate at this location. Almost all the acts played, there were 3 new releases, there was a label market, there were listening-sessions from new release The World Of Dust. And luckily, there was an after party as well with crazy deejay-sets. Even I had to do one, so from that moment on I allowed myself to drink. And then there was a lot less stress. There is a beautiful video that really captures the night, you should see it: http://www.youtube.com/watch?v=g41NGD8YvBs

IN:  You had clowns too… Tell us about your clown moment at the Tivoli!

CM: Oh yes, friends from Basserk (a dance label from Amsterdam) had the ‘Mega Matjes Disco’ going on in the other Tivoli-room during our after party upstairs, and they booked Clown Bassie. EVERYONE over 20 in the Netherlands knows this clown, and he is actually 78 now, so it was…… special to see him do his routine. Of course, backstage, everyone took a picture with him! (IN: see above!)

IN: How do you see things panning out in Holland next year, musically, anything we should look out for?

CM: Kim Janssen is recording, but these recordings are going to be in separate phases, so it might actually take a while before that will be released, but when it will, it will be huge, I’m convinced. There is a new I Am Oak release coming end of January. And before that, Town of Saints will take ESNS by storm. Herrek just released a beautiful new EP, with which they will tour again. And personally, I hope they will also do more shows together with Broeder Dieleman because I loved that combination when I saw it in Rotterdam.

IN:  What are your thoughts on the scene in NL at the moment, generally? And anything you’d like to single out for praise or censure?

CM: Anything with dark chocolate or caramel.