I’d wager this record (if the tooth whitened media-savvy robots and tablet botherers that constitute the Palace Guard at Bastille Hilversum give it the RIGHT AMOUNT OF EXPOSURE) could be the soundtrack of the summer in Holland.

I’d wager this record (if the tooth whitened media-savvy robots and tablet botherers that constitute the Palace Guard at Bastille Hilversum give it the RIGHT AMOUNT OF EXPOSURE) could be the soundtrack of the summer in Holland. 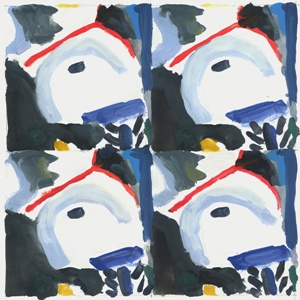 A lovely record; with a couple of real highlights that only the hard hearted would shun. In fact, you deserve a medal if you manage to get past Like That and listen to the LP in one sitting; as Like That is a jewel of a pop song, mixing bittersweet melody with a beautifully positive rhythm buoying the sentiment. Oh, and you can add some very clever guitar licks too; that carry just the right amount of weight. It’s up there with early REM and CRIMINALLY short at 1 minute and far too few seconds’ length…  but I suppose that’s why it works so well.

There’s been a lot of talk about the Feelies with this record; and whilst I can sort of see why people are using that old band as a sounding board, I’d contend that their label mates Nouveau Vélo sound far more like the Feelies than the Naïve Set, who – if we’re going to play “let’s compare” in this review – seem to have something of bands like (very, very early Happy Now era) The Beloved, The Bodines, or (a very poppy, direct) Felt about them. It’s that bubbling, “dumby dumby dum” plod that all three bands share. Witness Setting The Sun, where our heroes manage to emulate what all those C86 bands did TO THE NOTE; namely, nick the sound of Arthur Lee’s Love and somehow make it into a bedroom sound. Setting The Sun could easily be a Primal Scream B-Side round 86 whereas Bo and Hover Hands are total rips of that Love sound from Forever Changes. And there’s something in their off the shelf, mid-80s pop (e.g. Safe Flight) that reminds me of great “lost” Dutch bands like Eton Crop and The Golden Strings; (if not possessing, as in the ‘Crops case, that grinding buzzy sound). The down side is sometimes it gets a little too easy on the ear; you’d love them to push it a bit more, (I mean that vocal refrain in The Art of Nodding is cut off far too quickly… fucking ridiculous). It’s a thing I have with a lot of Dutch acts; many of whom seem to be obsessed with getting their sound down perfectly rather than using it as a starting point for some exploring their worldview. I mean, this is a band that covers TV Personalities….

Further kicks can be found with the opener Honest that is deceptively coy and There Isn’t Any Place For That, which is an absolute gem, one that shuffles through a whole host of attitudes.  It’s all good clean fun, it really is. I’d wager this record (if the tooth whitened media-savvy robots and tablet botherers that constitute the Palace Guard at Bastille Hilversum give it the RIGHT AMOUNT OF EXPOSURE) could be the soundtrack of the summer in Holland. It’s a deceptively attractive record. Even if their best songs are too fucking short.

There is even talk – among those who can be bothered to lift themselves off the couch – of bands like Naïve Set, Apneu, Rats on Rafts, Wolvon, Vox von Braun, Space Siren, Katadreuffe (et al ad nauseum) forming a movement in Holland, which I suppose means “it”, whatever “it” is, is all dead in the water now. It’s the inevitable and unavoidable curse of journalism; codifying feelings and gestures, just at the point when their initiators are moving on.  Of more interest (socially) with releases like this one, does it mean that Subroutine Records are evolving into an even more skint, and “sand in the Vaseline” version of the image Creation managed to project round 1985-6? Is this really a new “label of love”? Well, I think there are some grounds for it. Both certainly flirt with that bumptious provincial chic. And Creation back in its early days would have been proud of a strong, independent and incredibly commercial release like this one.