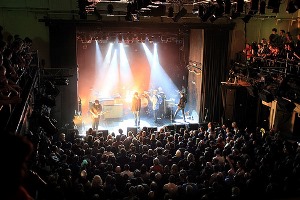 This show is one of the best I’ve seen from the Bunnymen for yonks, maybe the last decade and a half. The reason? Well, there’s just something in the air, as Thundeclap Newman so quaintly put it.

This show is one of the best I’ve seen from the Bunnymen for yonks, maybe the last decade and a half. The reason? Well, there’s just something in the air, as Thundeclap Newman so quaintly put it.

I will miss Tivoli Oudegracht. I know it wasn’t the last gig here (I believe Neutral Milk Hotel was the last foreign act to play) but to be honest seeing the band that got me into the underground and one of my new favourites was reason enough to call it a day. For the record, I loved its well preserved and dignified shabbiness, its gloaming atmosphere, its booming sound, its warmth (the staff here were always the best, super friendly, properly rock and roll) and – its “modesty”. Oudegracht didn’t need to show off; it left that to the people inside. A beautiful womb of rock memories. I wonder what it will become now? Incredible to think the Mobiele Eenheid once besieged it, within our lifetimes. Anyway; the night saw an early start and Incendiary down the front for Rats on Rafts. Now Rats are going through a whole host of changes; (started by those mad Black Midgets from the Future gigs a year or so back). Their sound is getting bleached, and stretched and strange; funnily enough sounding like their really early recordings and demos. Those who are only acquainted with their fiercely committed pop side had better watch out. That’s still there of course; the new single Powder Monkey – here belted out at a furious speed – is classic Rats on Rafts, and their greatest trick is still their gift for unlikely catchy melodies, but things like Zebradelic take the Muse in another, more disorientating direction. Think a poppy, brittle Hawkwind; a bit flashy, sharp, snide and street. And long. Rats are looking to muck about with their template; to add a deeper backdrop, one with more shifts of mood. Jazz is still a brilliant highpoint, as is the coda tacked onto Jazz (the name of which I can never remember) which eventually became a song; you know the one with a simple beat and infants school melody that sounds like an old chugging train. Another highlight is the fact that they just kept going, running over their slot by 10 minutes. Rock on. But yeah…these new songs; baffling and interesting and throwing the audience off kilter with a statement of intent. You just can’t say they’re a “nice Dutch band” anymore. They just don’t fit that context. And this new LP – if the new songs are anything to go by – could be epic. Add a couple of tracks that really slow things down and I think we could have a serious classic on our hands.

Then, Bunnymen time. Now I have lost count on how many times I’ve seen them; I prefer not to think about it. But this show is one of the best I’ve seen from them for yonks, maybe the last decade and a half. The reason? Well, there’s just something in the air, as Thundeclap Newman so quaintly put it.

For one, there’s no mucking about, (well not until very much later). The band built up a huge atmosphere, simply by letting their songs do the work.  And Mac was in a happy mood (an incredibly happy, funny mood, actually) and his voice on the night sounded incredible, hitting notes I thought he couldn’t hit anymore; carrying tracks like Nocturnal Me and Bring on the Dancing Horses with this panache and suggestiveness only a few can pull off. WHY can’t he just do this more? Why can’t he just bin the bloody Lou Reed stuff and stick to his own (superior) songs like Lips Like Sugar and Nothing Lasts Forever? That trick of shoving stuff in their own songs should have stopped at the Albert Hall back in 83.

Secondly, the balance between him and Will Sergeant’s coruscating, vicious guitar runs was balanced to a tee on this night, too. That balance is vital to them; you can’t have one without the other at a Bunnymen gig, and that’s where (I humbly think) they sometimes have recently lost the thread. Still, when it comes together – as it did on the night – the band still more to offer than most; opening up strange corners of the pop psyche at will. Anything else? Well we got pretty much all of the Ocean Rain LP except for Crystal Days, YoYo Man and Thorn of Crowns (oh for that in the set list again); including a heart stopping Ocean Rain, a brilliant Killing Moon, where the bathos and grandeur was well to the fore and Will’s guitar line sounded as exciting and menacing as of old, and a stunning take on Nocturnal Me; one of their greatest “strange/beautiful” songs. The stuff off the new LP Meteorites sounded pretty epic as well; very Ocean Rain indeed and with more swagger and bite and less of the Sinatra/Neil Diamond candy floss than I’d supposed. So too many highlights for old gits like me; including a bravura take on The Cutter, still a spine shivering wake up call, and one of the greatest blends of psych weirdness in a pop song there ever was. All That Jazz still came on like an aggressive old rocker looking for a scrap, too, and Lips Like Sugar was elegance itself when it was allowed to be (Oh if the “Grey LP” had been less fussy and well… less squeaky clean and “1987”). It was all great stuff. So great that people just didn’t want them to go. Two encores, maybe more, (I can’t recall Mac hugging Willem Venema onstage (there’s a sight) and the band running over “curfew”. Fab. Perfect. Just how it should be.

A fine ending for Incendiary’s visits to Oudegracht? I’d say so. Memories can’t be turned into primetime development land, whatever the evidence to the contrary.