Now and again things do disappear down a wormhole, but overall this LP’s a damned good, funny, and all-giving listen; and best is saved till last.

Now and again things do disappear down a wormhole, but overall this LP’s a damned good, funny, and all-giving listen; and best is saved till last. 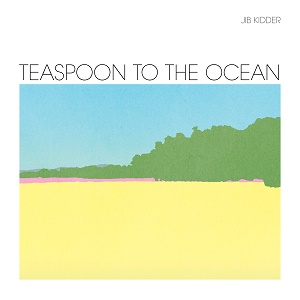 Cor they don’t half try hard, these promotional types. Especially when they’ve been down the reference library. Accompanying the latest release by Jib Kidder is this fanfare: “The eleven acid-country pop songs of Teaspoon…. combine the cut-up lyrical style of avant garde [sic]  literary great Gertrude Stein with influences ranging from Lindsay [sic] Buckingham to Meat Puppets by way of Roy Orbison, Gary Numan and Indonesian Campursari and Vietnamese slide guitar playing.” This is all very well, and the mind boggles at the juxtaposition of Buckingham and Stein, but is Teaspoon to the Ocean any good as a listen? Happy to say that – despite my initial misgivings about the whole thing being a total porridge of whacky ideas,  throwaway posing and all round dilettantism – it is a pretty great pop record. The opener Remove a Tooth is a curious piece that keeps you guessing, and in the game long enough to hear the beautiful pop of In Between, which (through its clunky psychedelia and killer hook in the melody line) is a C21 update on My White Bicycle. Elsewhere, Appetites has a Fab Four / This Boy feel to it; maybe it’s the song’s melancholy.

I should point out that this isn’t some exercise in digitising 60s / 70s pop. Some things get very loose and post-post-modern (The Waves) and others get plain folk-popsy on your derrière, such as The Many or Illustration. World of Machines, though, has to be one of the best weird-pop excursions in months; ghostly but funny, hilariously unkempt but on-the-ball nonetheless. A bit like Slim Jim Baxter tormenting Norbert Stiles. Dozens is a beautiful song too; high off its own melody and sweet as candy.

Now and again things do disappear down a wormhole, but overall this LP’s a damned good, funny, and all-giving listen; and best is saved till last. Melt Me is a superbly strung out raga; a widescreen dream-state with the feel of something that Sahel Sounds would stick out. Here, over a dry-as-a-bone backdrop, the vocoder’d vocals make everything sound like the sound you’d expect your brain to make when you were lost in a bloody great desert, and saw a mirage of a swimming pool; replete with a bloody great selection of cocktails and hippo-shaped water wings. Although it’s a long track (clocking in at over 9 minutes) you really don’t want it to end. Finishing off the LP is Wild Wind; a lovely uplifting thing that acts as a sort of rejoinder to Melt Me; and based round more gloopy vox and a weepy slide. Again, it’s over far too quickly.

Well worth a listen, this.