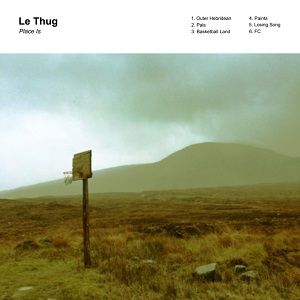 Song, By Toad seem to be on something of a roll. So confident (or knowing Toad, ridiculously excited) were they about their 2015 release schedule, they put out a 2015 sampler at the arse end of 2014 which was really good. No, rewind; ridiculously good. I always like what this label does, but there seems new purpose in the camp, new direction, less urbane angst, less navel gazing. And this be a good thing. Two recent releases (see below M’Lud) nod to the new wind in Toad’s sails.

First up is a marvellous EP by an old Toad act, Glasgow’s Le Thug; a band who (on this evidence) make that sort of wistful “eyes-down for a full distort” lamenting so beloved of the Scots. The opener Outer Hebridean sounds like Mazzy Star stuck in a washing machine that’s put on spin cycle, with La Star wailing to get out. It’s some beginning and one we get again as Losing Song and FC pick up the baton near the EP’s end. No bad thing. What else? well, Pals and Paints are paisley-patterned hand holders/sky gazers that look over the garden wall in envy at Spacemen 3’s Recurring. They are great in a teenaged, sunkissed way; emoting that transient feeling you spend the rest of your adult life trying to reconnect to. And I defy anyone to hold back the feelings of Teenage Angst (rising from the murky sump of 30 years of discarded memory) that come loose with Basketball Land.

This is the sort of music that dominated my foppish, underachieving, lank and unhygenic teenage years. I get the feeling that LP may do similar for other unfortunates.

Be Embraced, You Millions – the LP from Ian Turnbull’s solo project, digitalanalogue – is another leftfield unassuming masterpiece, and one worthy of a repeated spin. A quiet set of contemplative mood pieces and sample mash ups, Be Embraced… treads softly between beautifully patient, postrock chord progessions that could come from the Sigur Ros, Rodelius or Dirk Serries patent book and the sound textures that young Space Apes like Klara Lewis and Wanda Group play around with. It’s a great mix and one that constantly changes. We get baby and granny voices too, be warned.

In fact, Be Embraced, You Millions has the dessicated, Quentin Crisp off-stage air that those releases on Cherry Red from around 1983 or so had. Or the Fiery Furnaces’ masterpiece Rehearsing My Choir. It’s also a LONG listen, and not one to be undertaken lightly; though there are tracks like Ward 14 (The Wait) that do kick up a gear, by the last track Creag Ruadh (Keep Going to us Angles) you certainly need a Mars bar. Like T-Dream’s Zeit or Durutti Column’s LC, it’s a record that is best left on in the background, on repeat.