Partway through the album Cahoone sings the line ‘It’s gotta get better than this’. Sadly the prophecy isn’t born out. 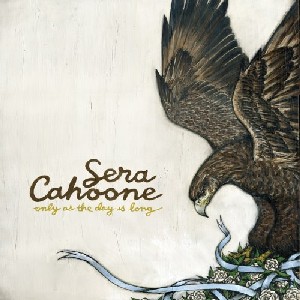 Sera Cahoone – Only As The Day Is Long

Sera Cahoone has previously drummed with Band of Horses and the band from which the equine-inspired group was formed from, Carrisa’s Weird. Like those groups she draws upon the southern rock and country tradition in her style of indie. However what she seems to have left behind is any of the more raucous bits of the sound of either of those groups.

Partway through the album Cahoone sings the line ‘It’s gotta get better than this’. Sadly the prophecy isn’t born out. Now there isn’t anything particularly wrong with the album. Cahoone has a pleasing, slightly smoky voice which complements the relaxed country fayre she is offering up. It is all very pleasant, but it is also somewhat dull. The use of instruments such as the dobro and pedal steel lends a warm feel to the record. What they fail to introduce is anything especially interesting.

There are a couple of moments where the album does feel like it is shifting up a gear. Most notably The Colder The Air which starts out sounding like it might bear something of a darker edge. However the track remains stuck in the same gear as most of the material on the record.

Cahoone and the assembled musicians are obviously a talented bunch and individually the songs are rather lovely. En Masse, however, they are somewhat enervating. For all the warmth and skill on show the most interesting thing about the album is the eagle that adorns the cover. Whilst moments on the album may approach the beauty of such a bird, it never comes close to achieving such power.