New York’s loudest band, apparently. You can hear that on this debut LP, it’s brimful of feedback and white noise. 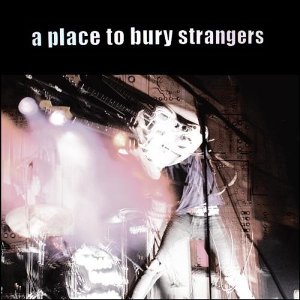 A Place to Bury Strangers – S/T

New York’s loudest band, apparently. You can hear that on this debut LP, it’s brimful of feedback and white noise. In many ways it’s a dead ringer for Psycho Candy, with its marriage of three chord pop and swathes of screaming, wailing noise. However, before you dismiss this as yet another humdrum tribute run-through, there are sublime moments that lift this collection very far from being a mere pastiche. Top of the pile is the shuddering groove of Breathe which is a marriage in heaven of Velvets and JAMC sensibilities.

The opener, Missing You is also a fabulous pop song, strung out on some jarring shrieking chords and I Know I’ll See You is a Gothic reflection par excellence. The Cure connection continues with She Dies (albeit with Will Sergeant guesting on lead)

There’s a lot of energy on this LP, the band aren’t content to sit back as tracks like Never Going Down and Get On illustrate. Last track Sunbeam is a pleasant surprise too with its blissed-out waves of noise owing more to Spaceman 3 than anything else.