unsurprisingly, quite a schizophrenic album

unsurprisingly, quite a schizophrenic album 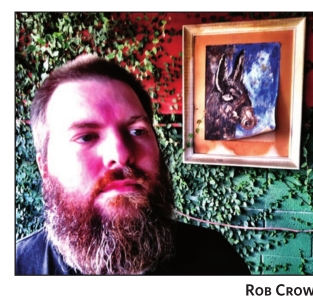 Rob Crow is prolific. Seriously, look at the list of stuff he’s been involved with http://en.wikipedia.org/wiki/Rob_Crow  (you’ve got to give praise to Goblin Cock if nothing else) and try thinking of anybody outside of Ryan Adams and Will Oldham who are churning out material as regularly as this guy. Of course, quality doesn’t necessarily equate with quality but more often than not, Crow’s projects are worth checking out. (Seriously, check out Goblin Cock, they’re hilarious!)

He Thinks He’s People is an admittedly great title but sadly it’s not quite a great album; although it certainly has its moments. Scalped is excellent, as is the closing track Hangnailed and I’m mightily impressed with Prepare To Be Mined too, even if that’s because the guitar section at the centre of it sounds like someone trying to work out a difficult maths equation and struggling badly. It threatens to derail the song entirely but then somehow he drags it back from the brink with a delightful closing section and I like the sense of melodrama that creates. The immature little brat in me enjoys the song title Pat’s Crabs immensely but the song is a little too slight in both length and structure to raise more than a titter. So Way, which follows it, is much better. It comes across as a kind of strange mix of Stone Temple Pilots and Stephen Malkmus and yet I promise it won’t piss you off. How is that possible you may ask? I’m not entirely sure to be honest but that’s why I like it so much. And let’s face it, you’ve got to give any album a chance if it contains a song with the title Locking Seth Putnam In Hot Topic, don’t you?

He Thinks He’s People is, unsurprisingly, quite a schizophrenic album. It switches styles more often than you would change TV channels during a weekday afternoon but it’s never quite as annoying as daytime TV thankfully. At times it’s quite brilliant and at times it’s decidedly unremarkable. Perhaps Crow’s simply too prolific for his own good? Or perhaps there isn’t anyone in his stable strong enough to force him to sort the wheat from the chaff? Who knows? Whatever the case may be, there’s enough going on in here to pique your interest on occasion and the best thing is, you know it won’t be long before he brings out something else for us to pontificate over. And bless him for that.