Stephen Watt’s pilgrimage to Manchester continues, and, although he almost arrives at the gig, the Stone Roses aren’t due on for five hours. What follows is simply more navel-gazing from a self-absorbed, middle-aged man, who refuses to let go of the past. Poor chap, he just wants to be adored. But, then, don’t we all?

Stephen Watt’s pilgrimage to Manchester continues, and, although he almost arrives at the gig, the Stone Roses aren’t due on for five hours. What follows is simply more navel-gazing from a self-absorbed, middle-aged man, who refuses to let go of the past. Poor chap, he just wants to be adored. But, then, don’t we all? 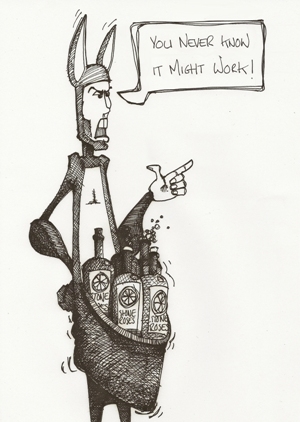 I slammed the door, and watched the vehicle speed away. The journey had been disturbing, astonishing even. It shouldn’t have been a surprise. It wasn’t like when my mum realised that, rather than hanging around with a bad crowd, I was the bad crowd.

Prior to setting off, in addition to seven pints of loony-brew, my companion JC had sunk four doubles. This wasn’t purely wilful indulgence. He’d planned to sneak the whiskey into the gig, but his clothes were not suited to concealment. The only option was his hoodie’s front pouch. It wasn’t snug. If he’d been a kangaroo he’d have lost his offspring more often than scatterbrained Dave Cameron. Every time he moved, he chinked. Even raising his eyebrows made it sound like the pub window had been smashed. He had no chance of getting past security, so he’d downed them.

It wasn’t until we were in the car that I noticed the nuanced facial expressions and body language that belied a rather advanced state of inebriation. That and the fact that, he suddenly shouted: “fucking hell!!! What’s that?” The answer to this frenzied exclamation was: ‘it’s a church tower in front of a large tree’. We were in trouble. I should have perceived this earlier, but I’d been preoccupied.

There are few places more conducive to relaxation and good conversation as a pub, early doors, Saturday afternoon. Friday has, inevitably, been celebrated with alcohol and impetuous behaviour, and, once the slightly jaded feeling, fear and regret, have dissolved in the first few pints, you can sit back and enjoy the weekend, safe in the knowledge that you have nothing to worry about until Monday morning… well, apart from whether chronic liver disease and STIs are a problem or badge of honour.

This was not the case in the Fletcher Moss, Didsbury. The atmosphere was tense. We had a problem. John the Architect, our host for the weekend’s festivities (although he was not joining us at the gig), had been there the night before, and, despite being a Mancunian, savvy to the city’s strange ways, it’d taken him five hours to get home.

Now I know it’s not really rock ‘n’ roll, but here I was a few hours before a gig I’d been waiting 25 years for, and, rather than being more excited than a suicide bomber approaching a checkpoint, I was terribly worried. It was unacceptable, I simply couldn’t get to bed as late as three. I’d be all tired and irritable the next day, which wouldn’t do as I was having late-luncheon with mater and pater. This conundrum had to be thrashed out.

JC disagreed. He wanted to focus on what he excels at, having a good time, all the time. (Reilly is rumoured to envy his lifestyle.) He did offer a solution, but John was being completely unreasonable: just because we were sleeping at his house, and he was dropping us off, he was unwilling to pick us up, even after my hedonistic friend had informed him that he’d have done it.

Leaving my associate to indulge his crapulence, me, John the Architect and the inimitable Pete Taylor examined the options. We tried booking a taxi to pick us about a mile from the gig, but they weren’t taking orders. An extreme plan involving mountain bikes and a sister who lived near the park was dismissed due to a lack of mountain bikes… and a sister. Similarly, an aerial extraction was discounted as the man who owned the helicopter would surely have been over the legal limit for drink flying by eleven. He seemed rather exuberant when I talked to him at two. He also wanted cash up front. Remaining sober and driving to the gig was discarded as Peter informed me the car wouldn’t be there when we got back. However, when I began to seriously consider the ultimate blasphemy, leaving the concert before the end of I am the Resurrection, I knew that I needed to get a sense of perspective. JC was right, this was a once in lifetime opportunity. Why worry about getting home, something would turn up. It always did. I had to go with the flow, and, heaven forbid, actually enjoy myself. Suitably chastised, I ordered a drink: a large one.

John’s car disappeared, and, I turned to see JC narrowly avoid being run over by a slow-moving police car. Ditching him early seemed prudent.

The prospect of attending a day-stival alone was not appealing, but the atmosphere seemed benign, and, as I’d recently attended a course in Applied Friendship, I wouldn’t have trouble acquiring acquaintances. Remember, a stranger is just a friend you haven’t met, that, or a serial killer. I’d simply avoid people holding large knives with manic eyes and blood-spattered clothing, which is easier said than done in Manchester.

We set off towards the gig, and, as the music began to waft across the park, I experienced a frisson of anticipation. Soon I’d be inside, standing in the rain, enjoying a weak, warm, flat lager from a half empty plastic glass, and a mere five hours later I’d be watching the Roses. Life was good.

Yet, on the horizon, storm clouds were gathering. There was one problem that I hadn’t planned for. John had mentioned it, but I’d assumed he’d been joking. If I’d known what the future held, I wouldn’t have been so quick to ditch the idea of bringing my rucksack and waterproofs, no matter how much I looked like a rambler. I’d also have quit writing, and started making vast amounts of money advising frightened, inadequate people how to live their lives.